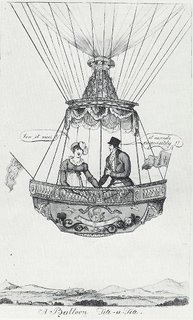 When Santa asked for an update on our projects, I had mixed feelings. I love that someone cares enough to ask, don’t get me wrong! But I also have to admit something: I’ve been wandering for a while.

After completing LADY DEARING’S MASQUERADE, I started work on a historical romance with a Regency balloonist as the hero. I thought it would be fun, but instead it soon felt like pushing a boulder uphill. I switched gears to work on a different story that I believed was more “high concept”, only to find the going slow on that one, too. Then not long ago the market seemed to call for something darker than what I was writing. Then sexier–plot setups where the sex starts from the get-go, whereas most of my couples would take about half the book to get to that point.

After desperately mulling around the 15-20 story germs in my idea file, I realized I’d allowed fears about marketability to suck the joy out of the writing. By some wonderful serendipity, around the same time the Smart Bitches blog posted some words of wisdom from Laura Kinsale. And many of her words resonated with me.

“I began to write because I loved to write. That is still the only way.”

I realized this was true for me as well. So I went into Deep Think Mode, looked back over my list of story ideas and asked myself which one I really wanted to write. And I got not one but two answers, so here’s what I’m working on now.

Project #1: Completing the balloonist story. I guess I like closure and having looked back over the partial draft I wonder why I thought it was so bad. Galloping lack of self-confidence, I guess.

Project #2: Character and plot brainstorming on a story I don’t feel comfortable describing yet. In my rational mind, I know perfectly well that the Riskies and our guests would probably say, “Go ahead and write this story” but my insecure inner artist will assume you’re just being nice.

Anyway, the mojo is back. I am enjoying the process of writing again, even if it will take a bit longer for me to get another book completed.

Thanks again for asking about this, Santa!

P.S. The image above is a cartoon published by McCleary, A Balloon Tete-a-tete, c. 1820. Since the speech bubbles aren’t clear in this picture, I’ll let you know that the lady is exclaiming “How it rises!” and the gentleman, “It ascends exquisitely!!”

Elena Greene grew up reading anything she could lay her hands on, including her mother's Georgette Heyer novels. She also enjoyed writing but decided to pursue a more practical career in software engineering. Fate intervened when she was sent on a three year international assignment to England, where she was inspired to start writing romances set in the Regency. Her books have won the National Readers' Choice Award, the Desert Rose Golden Quill and the Colorado Romance Writers' Award of Excellence. Her Super Regency, LADY DEARING'S MASQUERADE, won RT Book Club's award for Best Regency Romance of 2005 and made the Kindle Top 100 list in 2011. When not writing, Elena enjoys swimming, cooking, meditation, playing the piano, volunteer work and craft projects. She lives in upstate New York with her two daughters and more yarn, wire and beads than she would like to admit.
View all posts by Elena Greene →
This entry was posted in Risky Book Talk and tagged Elena Greene. Bookmark the permalink.

8 Responses to What Elena’s up to now