Even though I have been a voracious reader for eons (I’m older than I look), I never dreamed of becoming a writer. Now I can’t imagine NOT being a writer, even if I only ever publish one book.

That book, A Singular Lady, was also the first book I ever wrote (I know, I was exceedingly lucky to get it published).

So since then I’ve been trying to learn how to:

The results? Not bad, although the ultimate affirmation–a second offer of publication–hasn’t happened yet. But meanwhile, here are my Wondrous Works In Progress:

After A Singular Lady, I wrote Mothering Heights, a mom-lit contemporary. It tells the story of a Brooklyn mom (like me) with a son (ditto) whose husband leaves her penniless, health-insurance-less, and alone (not like me, although the Sensitive Husband has problems reading the story because of the similarities). That is finished, and is in the hands of an editor, who is considering it. Word on the street is that she really likes it, but has concerns about its needs for some editorial revision (did I mention a plot is not my strong suit?). The best thing that happens is that I get an offer for it, but it needs revision; the second-best is that they reject it, but say if I revise, I can resubmit; the worst, natch, is that it gets rejected outright. But no matter what happens with it, I don’t regret writing it a bit, since it was in a new genre and in a new POV (first-person).

I’m also in the process of revising a Regency-set historical titled Lessons In Love, about a Greek-English widow who discovers she was never really married, and who is forced into a situation she does not want in order to survive. The hero is a wealthy bastard–literally, an illegitimate man whose wealth and good looks have given him entre into society. And there are some lessons. And some love. Once I am happy with the revision, I will pass it along to my agent, who will try to work her magic on it, and get it sold. 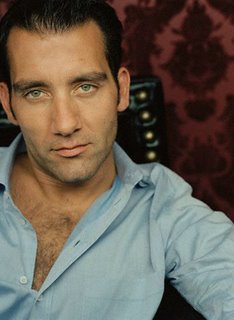 My next project will be a much darker Regency-set historical involving opium addiction, virgin auctions, vicar’s daughters, and thinking that you kill everyone you’ve ever loved. Oh, and hero looks a lot like my constant and ongoing obsession, Clive Owen (otherwise known as Mr. Broody).

So that’s it for me–thanks for the opportunity to talk about myself, because goodness knows, I don’t do that enough.

Megan,
I love these ideas! I especially love the Dark Regency idea, which is just up my alley – addiction, virgin auctions, Clive Owen (who is a nice second behind Gerard Butler!)

So how many behinds does Gerard Butler have? hahahahaha.
Cool stuff, Megan! Thanks for the pic of the lovely and talented Mr. Owen.
Janet

Megan, all these ideas sound very intriguing, and thanks for sharing them (and the pic). 🙂

BTW, I find opium addiction a really interesting subject. Not that I know that much about it. Just a little bit. My favorite opium story: once when DeQuincey had to go to a new apothecary, the man wouldn’t sell him opium until DeQuincey convinced him he was an opium addict!

(Okay, not as bizarre as it sounds: the amount of opium DeQuincey was trying to buy was so large that it obviously had only one of two purposes: suicide, or feeding an addiction. The former was criminal for both parties, the latter was a-okay.)

Clive Owen. Very nice. I particularly like that picture.

BTW, all three of your projects sound intriguing! And I’m glad to hear I’m not the only one who genre-hops. 🙂

LOVE the WsIP!!! I especially like the mom lit. I adore Brooklyn so that is the first pull for me!

Dare I call your dark Regency Gothic? If so, YEAH!! If not, it sounds wickedly good!

I’ll be keeping my eye out for your books!

I’m ready and waiting. (No pressure or anything, you know.)

I’m very interested in your Historical–good luck with it. And with your editor.

Thanks for the nice words, everyone. I am really excited to finish revising Lessons In Love, and then moving onto the Dark Regency.

Megan, I hope the mommy-lit book gets picked up — I thought you did a great job with it.