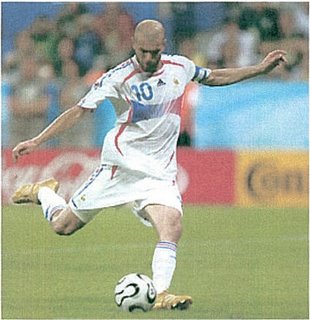 Today’s post is in honor of tomorrow’s final of the 2006 World Cup! Now, I confess I’m not very “sporty”–I never could get into baseball, football, or basketball. But there ARE sports I enjoy, like tennis and ice skating, and, especially, soccer. This is not an easy sport to be a fan of in the US (unlike the rest of the world!), and I have only been able to catch a few games of the World Cup, thanks to kind friends with satellite TV. But tomorrow’s final is actually on network television, yay! France vs. Italy, or the hunky Zinedine Zidane (who I have a bit of a crush on) vs. the hunky Fabio Cannarvo. Who to cheer for???

So, I did a little looking into the history of soccer/football, and here are just a few of the factoids I discovered:

–A game involving kicking a ball into a net is known to have been around as early as the Han Dynasty in China (2nd or 3rd century BC); they also played a similar game in Kyoto, Japan around 611 AD
–The Greeks and Romans were also ardent footballers. In Rome in the early Olympics, there were up to 27 players on a team, and 2/3rds of them had to seek medical attention after a 50-minute game
–In Britain (today probably the epicenter of foottball!) in the 8th century, the tale of the first game in England involves the severed head of a defeated Danish prince
–In 1331, Edward III passed laws banning football (booo!)
–James I of Scotland in 1424 proclaimed “That na man play at the Fute-ball” (boooo to him, too!)
–Elizabeth I declared that soccer players should be “jailed for a week and obliged to do penance in church” ( would really really like to know what was going on in those Elizabethan matches)
–In 1815, Eton established a set of rules for the game that other schools and universities soon began to use. These were later standardised and a version known as the Cambridge Rules were adopted in 1848
–There soon sprang up two camps: the Rugby School, with rules allowing tripping, shin-kicking, and carrying the ball vs. the Cambridge Rules boys. On October 26, 1863, 11 clubs and schools sent representatives to a meeting at the Freemason’s Tavern to establish a single set of rules to which everyone could agree. (This created the Football Association). But, predictably, the Rugby School advocates walked out (no doubt after kicking some shins), and on December 8 the Football Association and Rugby Football split.
–In 1869, the provision to forbid any handling of the ball was passed, and the soccer/football we know now came into being

So, best of luck to all the players tomorrow! Vive la France, or Viva Italia. Whichever. đź™‚

5 Responses to A Brief History of Soccer