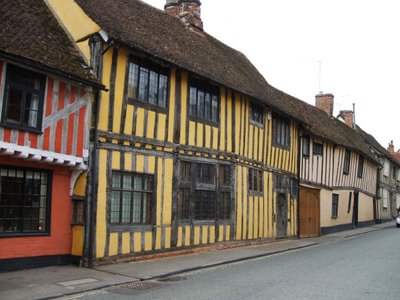 As you might have guessed, I have figured out how to upload pictures from my new digital camera to the computer. Here are some pics from my recent trip to England — houses in Lavenham, Suffolk. I love the colors!!! I’ve never been a fan of the greenish-brown brick that so many English houses have, so I just adore all the colors in Suffolk.

And then the half timbering — there’s SO much in Lavenham that it’s amazing. It’s really like going back in time — except for all the cars, of course. đź™‚ 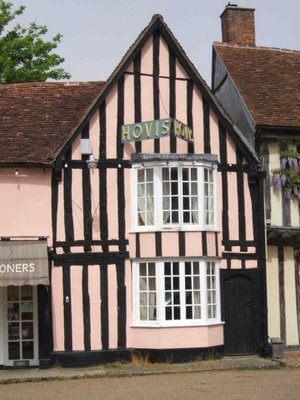 Ahem. Sorry about that.

During the Middle Ages, Lavenham was a prosperous wool town. The wealthy merchants built these houses to live in — these were prestigious homes back then, and those with the most wood were the most admired. Even Queen Elizabeth visited Lavenham in 1578, bringing her whole court. (Wouldn’t that be nice, having folks like that drop in on you, expecting you to feed them all at your own great expense?) 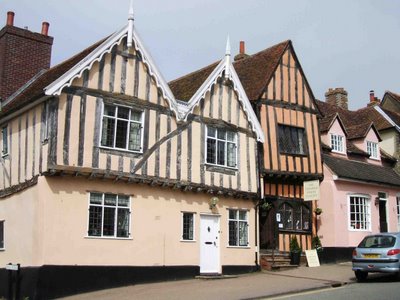 By the end of the century, though, the wool trade in Lavenham started to decline (perhaps Elizabeth’s court ate too much?) Eventually, Lavenham turned into a quiet little byway, no longer important in the economy of the nation, or even the county. This meant that instead of tearing down all these beautiful timbered buildings to put up factories and more modern dwellings, most folks didn’t have the money for serious improvements or modernizations — so Lavenham is almost untouched. There are over three hundred buildings in Lavenham which have been listed as being of historical or architectural significance. 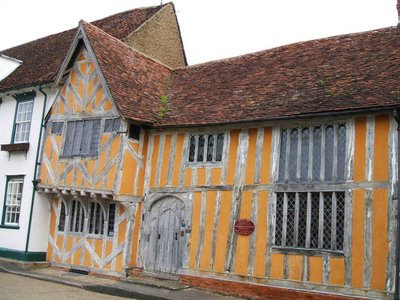 So: which of these would you want to be your house, or your Regency heroine’s house? (During the Georgian period, many of these houses were covered with brick — but our heroines, of course, can live in pink houses if we want.)

Pink, orange, red, yellow, beige, white — what color would you paint your house? Would you have white-ish timbers, as in the bottom photo here (which is apparently how they originally did them), or would you paint or stain them black or brown? Or would Lavenham just be too colorful a town for you?

This entry was posted in Research and tagged England, Lavenham, period houses, Suffolk. Bookmark the permalink.