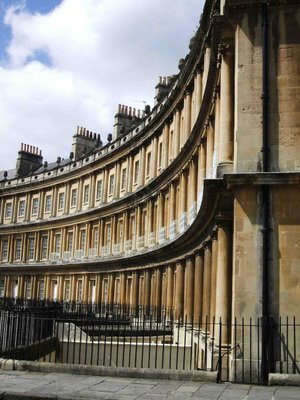 Breaking news! According to the Irish edition of The Sunday Times, the upcoming Northanger Abbey television adaptation (scripted by Andrew Davies, the screenwriter of the beloved Firth/Ehle Pride and Prejudice) will be filmed entirely in Ireland. Apparently, Ireland gives much better tax breaks for television productions than Britain does, which led to the decision. So next year, when Northanger Abbey airs on ITV, all the backgrounds and buildings and assembly rooms will be Irish.

I must admit, this decision disturbs me greatly! 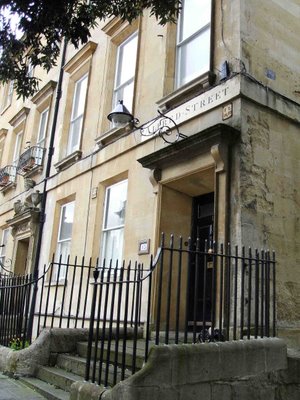 I do adore Bath, but that’s not the only reason I’m upset that the new Northanger Abbey will not be filmed at all there. It’s that I cannot imagine the story of naive Catherine Morland, sprightly Isabella Thorpe, boorish John Thorpe, satirical Mr. Tilney, and all the rest taking place anywhere else! (I refer, of course, to the first [and better] half of the novel. The last bit can be filmed anywhere at all, for all I’m concerned.) 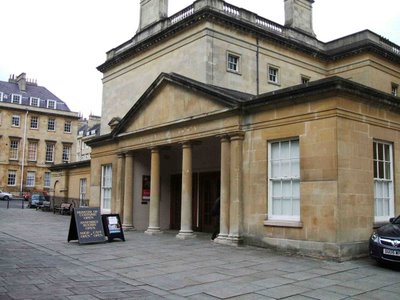 Jane Austen gives our heroine the true Bath experience! She attends the Pump Room, the Upper Rooms (pictured here), the Lower Rooms, she shops on Milsom Street, she stays on Pulteney Street, she “breathes the fresh air of better company” up at the Royal Crescent. The first half of the book is truly about Bath. And Bath is immediately recognizable. How can they possibly film it anywhere else? 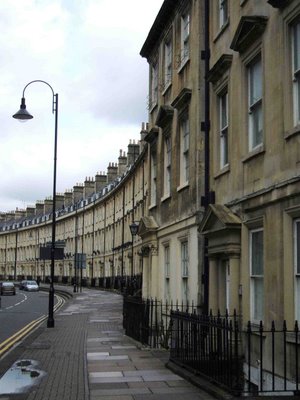 So, in honor of Bath, so cruelly slighted, I am sharing with you some of the photos I took of Bath during my recent trip there. In fact, I have so many pictures I want to share, that I’ve put them in two different blog posts. (Blogger gets touchy about a post with too many pictures!)

I think those of us who know Bath will be dissatisfied, but the vast majority of viewers will be perfectly unaware of the “move”. Kind of like how it’s hard to watch TV or movies set in the town you live in. They just never get it right.

Thanks for sharing your pictures. I loved Bath when I was there and can’t wait to go again (and maybe find the Georgian garden open!). Did you get up to Prior Park? Have they finished restoring the grotto yet?

Fabulous pics, Cara. How did you manage to shots without people milling around–were you up at 5 a.m.?

No surprise about Dublin–it has fabulous Georgian architecture. My aunts, who lived in Bath, said it was better< than Bath, and less messed around with. Now, if they were shooting “Persuasion” in Dublin I can see that might be a problem.

I have a soft spot for the early “Northanger Abbey” b/c John Thorpe’s carriage ride takes you right by the house my aunts used to own in Lansdowne Place West.

Well, I hope from what Janet says that it looks like Bath, but I must admit to being appalled!
Love the pics!

That’s rather typical. . . look at the X-Files and Smallville, they are series that took place in the US, but mostly filmed in Canada. Yep, it’s sucks, but what can you do, they go where it’s convenient for them.

MONK is the same way. I don’t know where it’s filmed, but except for a few “location” shots it’s pretty obviously not San Francisco. Like the cable cars in the most recent episode about the garbage strike. They were totally wrong. The whole thing looked like it was filmed on the set for ROGER RABBIT. But if you’ve never lived in SF, I bet you’d never notice. I have no idea if Kansas looks anything like what is on SMALLVILLE. Or, to give a period example, THE LIBERTINE was filmed on the Isle of Man. A car park (with lots and lots of fake fog) filled in for Hampton Court.

Kind of like how it’s hard to watch TV or movies set in the town you live in. They just never get it right.

I know what you mean, Kalen! I’ve never gotten over my 1983 annoyance at the movie “Valley Girl,” which implied that Vals had never heard of New Wave music. Blasphemy! And then all the books set in Los Angeles in which the natives only ever go to tourist places. 🙂

Oh, and another example of the loss of suspension of disbelief — part of the movie MEMOIRS OF A GEISHA was filmed at the Japanese garden in the Huntington Gardens (just down the street from me.) It’s a very distinctive backdrop if you’ve seen it — and at the local movie theatre, when that scene came on, everyone in the audience started laughing. Not that it was a bad choice for the film — just for those of us who recognized the location!

BTW, the Georgian Garden was indeed open when I went. Interesting, though small. I’ve never made it to Prior Park, I confess, even though I’ve been to Bath many times, sometimes for extended periods.

Janet, I’m not sure why I didn’t have more trouble with people walking into my pics — perhaps it’s because
(a) I was there a tad before high season,
(b) I wasn’t there on a weekend,
(c) perhaps I took most of the pics during the evening?
(d) maybe I just waited till they’d all walked on by?
(e) many of these pics aren’t of the most crowded places (the Circus, Royal Crescent)…

BTW, Janet, I’m curious about why you feel a film of PERSUASION needs Bath more than NORTHANGER ABBEY. Is it the general feel of the thing, or a specific scene or scenes you think needs the Bath setting more?

Ooh, Hampton Court faked? I’ll see if I can see the difference when I watch the Libertine DVD (which will be soon.)

Lois, LOL about the X-Files in Canada thing! Do you remember when, in one of the later seasons, they moved production to Southern California (so Duchovny could live near his wife or something) and all of a sudden it didn’t look like the X-Files anymore — where had all the rain and gloom gone??? 🙂

And when I used to review movies, I realized that SO many movies with European settings are filmed in Czechoslovakia. I guess Canada = Ireland = Czechoslovakia, in a way! (Though I guess now it’s just the Czech Republic. But I think they started the practice back when it was still CS.)

You know, I’m one of those folks who probably won’t notice, being too swept up in the story and the costumes, although like everyone else I mock sitcoms set in NYC apartments that actually have room for the characters to move around in when they’re not millionaires. But it would be rather hard to shoot a show in a shoebox.

It is sometimes a bit weird the way filmmakers move things around for their convenience. Vancouver really suited THE X-FILES–very dark and rainy with lots of mysterious forests. But it’s weird when on STARGATE our intrepid band of heroes keeps going to other planets, and they all look like British Columbia!

Of course sometimes the original authors have mucked about with local details for Their Own Purposes. You mentioned Jane Austen’s conviction that it always rained in Bath (which I think is mainly from PERSUASION–I don’t remember it raining that much in NORTHANGER ABBEY). But even stranger: I’m a big fan of the work of Raymond Chandler, and he was constantly having it rain in Los Angeles! I guess it helped set the brooding mood of his stories, but with triple-digit temperatures and nonstop sun, at the moment I only wish it rained half as much in reality!

I agree that most people probably won’t be bothered by faux-Bath in the story, but I will! A fake Pump Room? Fake Royal Crescent? Ack! It’s cliched to say a city is like “another character” in a story, but in NA it really is. But I’ll watch the movie anyway. It’s always fun to grouse about things like this. 🙂 (BTW, I also read about another British TV series called The Tudors about, well, the Tudors. It’s going to star Jonathan Rhys Myers as Henry VIII. An actor LESS like Henry VIII I can’t come up with)

Thanks for all the beautiful pics, Cara! You are a much better travel photographer than me. 🙂

It was wonderful wandering Prague and picking out film locations–it stood in as Vienna for Amadeus, and as London many times.

Britain has been rather shabby about subsidies for film companies–the latest version wasn’t all everyone hoped for.

The IOM has become quite popular, I’ve been on a couple of film locations there, each standing in for Ireland. But more frequently now, IOM is used for England-set films. And even Jersey, in the Channel Islands (which truly messed with my head, as I frequent both!)

That said, there’s plenty of filming (albeit mostly weekly tv serials) round England. Bucks is especially popular, given its proximity to the film studios and their facilities, and London.

Having read the article, I’m now trying to imagine Billie Piper as Fanny in ITV’s Mansfield Park…wonder what Jane would make of that bit of casting?

But it would ne NICE if it were filmed in Bath.

I remember watching White Nights, which was set in Leningrad, and suddenly realizing that it was filmed in Helsinki. I had been to both. Well, Helsinki is right across the water from Leningrad, so it wasn’t that big a deal.

In terms of being familiar with the physical setting when you’re watching a movie: I find it jarring to see the people walking down one street, and then after the next cut, they’re all the way across town in front of a different building for a close up, then, oops, here they are walking down the first street again in the master shot.

It must happen in a lot of movies, but I only notice it in a few.

(Don’t get me started on all the props for Star Trek: The Next Generation which started out as candleholders for Pier 1 Imports. I was managing a store when that debuted, and I could rattle off the SKU’s of some of “wineglasses” and “medical devices.”)

Since I’ve been associated with multiple universities in Southern California, I often spot places I recognize popping up in TV and movies. This is particularly true of the TV show NUMB3RS, where the fictional campus of Cal Sci is composed mostly of locations at the Caltech and USC campuses; so Charlie Epps can walk from his office in Doheny Library at USC through the quadrangle at Caltech to the faculty club at USC.