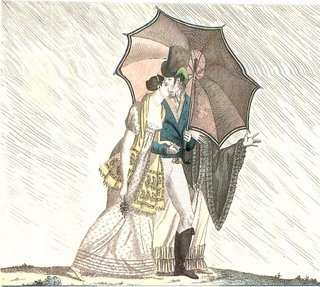 “It is commonly observed that when two Englishmen meet, their first talk is of weather; they are in haste to tell each other, what each must already know, that it is hot or cold, bright or cloudy, windy or calm” –Samuel Johnson

This past week, my town, like everyone else’s, has been in the grip of a massive heat wave. Today we are back to our usual low 90s, but yesterday peaked at 109. I dread getting my next electric bill! Anyway, with the heat and humidity the way it was, I couldn’t think about anything but the weather. Hence today’s post!

I wondered “what were the predominant weather patterns in the Regency?” (believe me, this is not something I am generally concerned about, unless I happen to need a huge storm or something for plot purposes, and even then I just generally make it up. Shhh! Don’t tell!). One thing I dug up was the fact that their weather was not much like ours in these past few weeks. They were on the tail-end of something called the Little Ice Age, which lasted approximately from the fourteenth century to the mid-nineteenth. Three years of torrential rain starting in 1315, plus something to do with glaciers that I don’t understand, began a long era of unpredictable weather. The first Thames freeze came in 1607, the last in 1814. In the winter of 1794/5 the French army could march on the frozen Netherlands river on their invasion, while the Dutch fleet was fixed in ice at Den Helder harbor. In 1780, New York Harbor froze; a person could walk from Manhattan to Staten Island on the ice. On a sidenote that is interesting probably only to me, there is a theory that the denser woods caused by the colder climate is partially responsible for the superb tone of the instruments of Antonio Stradivari.

Another interesting thing I found was the growing popularity of the “weather journal” and memoir in the late 18th/early 19th century. It was probably something to do with Enlightenment ideas of “civilizing” nature, which segued into Romantic notions of the wild perfection of nature. A few of the tidbits:

John Locke kept a weather diary between June 1691 and May 1703, often recording two or more readings of thermometer, barometer, and wind gauge in one day!

In 1770, the Irish Quaker physician John Rutty published the surprisingly popular Chronological History of the Weather and Seasons and of Prevailing Diseases in Dublin.

In 1779, Thomas Short wrote a General Chronological History of the Air, which goes back to the biblical flood. It’s a long catalog of plagues, floods, pestilences, earthquakes, famines, and other fun events.

One of the most prolific of these “weather watchers” was the Quaker social reformer Luke Howard. He published (among others) On the Modification of Clouds (which seems to have had a great influence on Romantic visual arts) and his most famous work The Climate of London (1818–20). A few of his quotes:
“Night is 3.70 degrees warmer and day 0.34 degrees cooler in the city than in the country (which he attributes to the extensive use of fuel in the city)

“At 1:00 yesterday afternoon the fog was as dense as ever recollect to have known it..the carriages in the street dared not exceed a foot pace. At the same time, five miles from the town the atmosphere was clear and unclouded with a brilliant sun”

“The sky too belongs to the Landscape. The ocean of air in which we live and move, and in which the bolt of heaven is forged, and the frucifying rain condensed, can never be to the zealous Naturalist a subject of tame and unfeeling contemplation”

To close, I’ll give a link to an interesting site that has some antique barometers for sale, if you happen to have a few thousand dollars you’re wondering how to spend. 🙂

Wow. Heat, begone! Yahoo tells me that at 6 pm today, it was 111 degrees Fahrenheit where I live. Ouch!

BTW, I bet one reason for all that obsessive weather-recording in the 18th century was their obsession with cataloguing, naming, and labeling everything. One extreme example of this (not weather-related) is Burke’s “A Philosophical Enquiry into the History of our Ideas of the Sublime and Beautiful.” In it, Burke very scientifically lists precisely what makes something beautiful, and what makes something sublime. I find this belief that the whole world, including our artistic and aesthetic senses, can be categorized, both fascinating and horrifying!

But not quite as horrifying as this weather… 🙂

where is a good ice age when you need one?

I noticed in a trip to New Zealand (where they’re more old-British than the British, it seems to me) that they continue to talk about the weather this way.

Don’t know if you all have seen this site, but it’s great if you want to know what kind of weather your characters might have been experiencing:

Is this ghastly heatwave a result of global warming? Everyone always does something about the weather, but nobody talks about it. 🙂

There was a cool (ugh, no pun originally intended!) documentary about the Little Ice Age. It had the bit about the Stradivari. Also that the climatic changes were what changed much of Northern Europe from wine drinkers to beer drinkers as grapes are more cold-sensitive than grain crops. Since most of the early colonizers of what would become the US were from northern Europe, it explains why as a nation we are more into beer than wine.

Elena, who knocked back a few cold ones recently but also enjoys wine

Since most of the early colonizers of what would become the US were from northern Europe, it explains why as a nation we are more into beer than wine.

Except in CA, where we can get a bottle of vin très ordinaire for two or three bucks from Trader Joe’s. 🙂