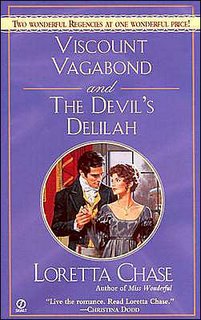 I’ll give almost any genre or author a try normally, but when I’m on vacation (beach or otherwise) I’m less adventurous in my reading. I think it’s because vacation time is so precious I don’t want to risk wasting it on something I won’t enjoy enough to finish. And since many of my vacations are outdoorsy, chances are there might not be a bookstore nearby to supply a more satisfying read.

So I usually stick to favorite authors.

For my next vacation, I’ll make an effort to catch up on Amanda’s and Diane’s backlists, though these ladies are so prolific it’s a challenge (albeit a worthy one!) to keep up. The pile will also include books by some of the following authors: Jo Beverley, Judith Ivory, Laura Kinsale, Mary Jo Putney, Jean Ross Ewing aka Julia Ross. 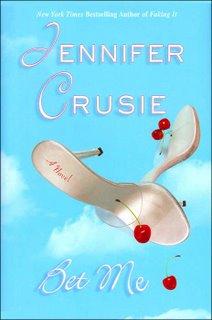 But I have a confession to make. While the pile (constrained only by luggage space) may have some weightier stories, there also have to be what I think of as quintessential beach reads: pageturners with plenty of humor.

That’s why I almost always vacation with something by Loretta Chase. In recent years, I’ve romped through a few of her two-in-one Regency reissues. Her long historicals are also fantastic, of course. But I guess most of you know that already!

Here are a few other books I’ve read recently that are great beach reads.

BET ME by Jennifer Crusie–great characters, dialogue and what the hero does with a chocolate Krispy Kreme is just…well, believe me when I say it’s good. Very good. 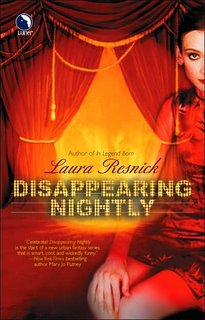 DISAPPEARING NIGHTLY by Laura Resnick. It’s not a romance though it has a romantic thread that ends in a kiss. Really, it’s Chick Lit meets Ghostbusters. Kooky stuff, but I devoured pages as if they were potato chips. If I were allowing myself to eat potato chips during swimsuit season, that is. Which I don’t. Mostly.

So anyway, here are just a few more authors and titles you might want to consider trying this summer. Along with, of course, anything by the Riskies. đź™‚

Elena Greene grew up reading anything she could lay her hands on, including her mother's Georgette Heyer novels. She also enjoyed writing but decided to pursue a more practical career in software engineering. Fate intervened when she was sent on a three year international assignment to England, where she was inspired to start writing romances set in the Regency. Her books have won the National Readers' Choice Award, the Desert Rose Golden Quill and the Colorado Romance Writers' Award of Excellence. Her Super Regency, LADY DEARING'S MASQUERADE, won RT Book Club's award for Best Regency Romance of 2005 and made the Kindle Top 100 list in 2011. When not writing, Elena enjoys swimming, cooking, meditation, playing the piano, volunteer work and craft projects. She lives in upstate New York with her two daughters and more yarn, wire and beads than she would like to admit.
View all posts by Elena Greene →
This entry was posted in Reading and tagged beach reads. Bookmark the permalink.