The heat wave that has gripped the Northeast (and the rest of the country, but I’m not there, am I, so I can’t speak for it) has forced me to take my seven year-old son to no fewer than THREE movies this week. 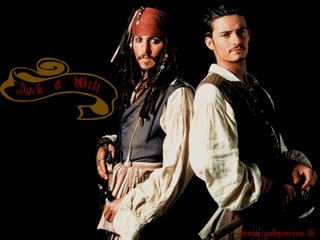 And the rest of Brooklyn has thought that was a good idea, too. So yesterday, instead of seeing the Ant Bully, my mom friend, her two kids, and me and my son went to see Pirates of the Caribbean: Dead Man’s Chest. Now, I wasn’t going to take my son because it’s PG-13, and I did think he could handle this movie, but I didn’t want him making me go down that slippery slope and seeing other PG-13 movies like, say, X-Men: The Last Stand. We’ll deal with all that later, I am certain. Oh, and my son’s friend’s dad did stunt work on Pirates, so we got to see his name at the end, so that was cool.

But after the Ant Bully sold out, we had to. Plus it’s a long movie, which meant more time in the AC. And boy, was it fun. There were parts I couldn’t follow–am I a forgetful mom or was it just confusing?–but I loved the action, the plot twists and turns and, of course, the combined eye candy of Johnny Depp and Orlando Bloom.

And now in romance there’s been a clamor for more pirate books. Sabrina Jeffries wrote The Pirate Lord, which I very much enjoyed (I actually love all her books), Jennifer Ashley has a few I haven’t read, Edith Layton has a pirate romance coming out in December, and a quick search on ‘pirate’ on Amazon reveals over 10 pages of pirate romance books.

Do you like pirates? Are there any recent movies that make you long to read books with a similar theme? And if you had to choose, who would it be: Johnny Depp or Orlando Bloom?

I have a bit of trouble suspending my disbelief with pirate romances because life at sea–and piracy in particular–was unbelievably brutal, filthy, and violent in the 18th century. Same thing with medieval romances where people take baths all the time. But it is fantasy, after all.

As for movie inspiration, how ’bout something along the lines of “Gladiator”? (Yes, I know, brutal, filthy, violent…) But the Roman empire could be an interesting setting.

Captain Jack’s my choice. Not that I’d turn up my nose at Orlando as Will. Or maybe I’d have a long tempetuous fling with Jack and settle down with calmer, more principled Mr. Turner.

Are you trying to make me CHOOSE?

I’d like to see more books set in the times of The Three Musketeers, or Dangerous Liaisons, in terms of movie inspirations. This would involve having to read about men in high heels and make-up which supposedly is a turn-off for readers. But hey, if Johnny Depp can pull it off, I think most romantic heros on the page could do it too.

I think that Will and Elizabeth really came into their own this movie. For some (probably perverted) reason, I found Will more attractive this time around. In the YA category, Celia Rees and Tanith Lee have pirate books. Both have girl pirates. Also, Marsha Canham has a couple and Gaelen Foley has one.

There is a Three Musketeer mystery coming out in November (or October) by Sarah D’Almeida (who also writes as Sarah A. Hoyt). Just this month is “Duchess” in trade. I can’t remember the author, but it takes place in the restoration.

This would involve having to read about men in high heels and make-up which supposedly is a turn-off for readers. But hey, if Johnny Depp can pull it off, I think most romantic heroes on the page could do it too.

This has always been my argument! Johnny Depp in wigs and lace: Yum. And you just show me an adult woman who can watch the original THREE MUSKETEERS and not find at least one those guys S-E-X-Y (it’s Oliver Reed all the way for me; yeah, I like ‘em a bit dark and a bit rough *GRIN*). I think it’s about being able to express the core of steel beneath the lace and velvet.

This is one of the reasons that I think Jo Beverley’s Malloren books and Julia Ross’ Georgian-set ones are so wonderful. Both these writers can put a man in silk and lace and powder, yet you KNOW that he’s dangerous under all that finery.

I’m afraid pirates just don’t do it for me either. Nor do men in lace and high heels. Now a Gladiator book would make my eyes light up. Mills & Boon /Harlequin Historicals bought a Gladiator romance recently.
Another time period I would like to read would be WWII, or the 1930’s leading up to the war.
The Three Muskateers I loved was the version with Oliver Reed. In his younger days, he was quite….nice. He sadly died during the filming of Gladiator.

Hey, Kalen, did you attend the RWA Idol session at Nationals last week?

I only ask because Lacey reports on her blog that one of the two-page excerpts that was read and nearly instantly rejected was one which began with the hero looking at himself in the mirror and reflecting upon how he had come to be wearing a dress. And Lacey said it was hysterical and, she thought, wonderful, but was rejected on the grounds that “hero in a dress is not sexy.”

Now, I personally agree with you that men in frippery can still be sexy and dangerous (and Johnny Depp is a master of this, but then, I fell in love with him when he was on 21 Jump Street; am I dating myself, here?), but I gather (sadly) that it’s not the mainstream view.

I do enjoy pirate movies and books, though the rational part of my brain has always found it strange the way pirates are romanticized–even more than highwaymen. I love seafaring books, so that’s part of the appeal. (Pirates is my favorite ride at Disneyland, too! 🙂

I also love books set in ancient Rome! Some of my favorite are the mysteries by Lindsey Davis, starting with Silver Pigs. They have historical setting, mystery, comedy, and romance, so what’s not to like??

And Diane, I too would enjoy reading early 20th century-set books! Not just the 30s and WWII, but the Edwardian era, WWI, and the roaring 20s all seem to have great potential. I have often asked my long-suffering wife why there are almost no romances set during these times, and she has explained (repeatedly!) that it has been a near-taboo for 20 years or more. Heaven knows why!

I have to say I agree with Todd!

I definitely love Pirates though, and I guess I’m strange, I like sea battles, pirates, medieval warfare, arabic knights, I’ve written about all those things, even if I have never gotten them published (just privately printed), I even had used 20’s-30’s on up themes, so nothing’s new for me. 🙂 I enjoy diverse things. I’m odd also for I know some thinks it’s more a mans things, I can watch westerns, war dramas and be quite happy in all the noise!! ;)I guess I’m a bit tom-boyish after all, maybe I got it from James. So I’m all for Pirates, especially female ones!

I wasn’t at the RWA Idol. No real interest. But I think I’d have thrown out a MS that started with a guy staring in a mirror and thinking about what he was wearing, too. The dress would not have been the real kicker. The whole “mirror” thing is just so freaken lazy. I think Heyer (in THE MASQUERADERS) is the only author I’ve ever seen pull off a man in a dress (and Robin’s is the secondary romance, he’s not the hero).

I do like pirates, though in romances certainly the fantasy more than the reality. 🙂 But I’m with Mallory in that I enjoy gritty, dark, violent stories sometimes. And I would choose Orlando, of course, if he came with that leather coat he wore in PIRATES 2! (Then again, I also like Restoration and 18th century stories–there is something about a guy who is dressed in velvet and lace, but underneath is tough as steel…)

It’s funny, I’ve only read one pirate romance. It wasn’t bad, but I did have problems with the fact that I know pirates were supposed to do Bad Things and all the Bad Things were carefully avoided in the book. So definitely, it’s swashbuckling fantasy. To work–for me–I think pirate romance has to be very fun and fast-paced so I don’t stop to compare what’s going on with what I know about history.

I’m embarrased to admit I haven’t seen either of the Pirates of the Caribbean movies yet. I’m waaayyy behind in my movie-watching!