Would you pull your teeth with needlenose pliers? 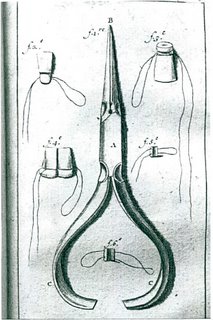 Have you ever seen the movie Topsy-Turvy? I LOVE this movie, which is a terrific behind-the-scenes look at Victorian theater life via the creation of Gilbert and Sullivan’s The Mikado. But I’m not here to talk about the music, or the costumes, or this great ‘rehearsal’ scene that revolves around the correct pronounciation of “corroborative.” I’m here to talk about another scene, where Gilbert (played by the great Jim Broadbent, who should have received an Oscar nod for this role, IMO) goes to have a diseased tooth extracted. There’s much screaming and cursing and kicking, as the dentist clamly chats away–“You know, my wife and I went to see Princess Ida, and we felt it was rather too long…”

I thought about this scene on Thursday afternoon, as I prepared to go in for my own emergency dental surgery. Luckily, I had nitrous, numbing agents, and lovely painkillers for after. But I do still hate to visit the dentist. So, I distracted myself by looking up facts about historical dentistry to share with all of you! (Just in case your next hero is going to be a dentist or something…)

Dentistry has been around as long as people have had teeth. Clay tablets from Sumeria, dated from between 5000 and 3000 BC, speculate that tooth decay was caused by the gnawings of a tiny worm. Despite this rather yucky theory, early civilzations still had surprisingly advanced dental knowledge. They even filled or extracted diseased teeth, and splinted loose teeth. Egyptian mummies have been found with teeth made of ivory, or even transplanted human teeth. And the ancient Greeks even figured out that sweet foods add to tooth decay.

In medieval England, dentistry was practiced by barbers, until the 17th century. George III had his own dentist, William Green. And in England and France, women practiced dentistry, such as a Madame Silvie, who made and fitted artifical teeth and also made snuff-boxes and tweezer cases. In 1771, John Hunter, an English anatomist and surgeon, published A Natural History of Human Teeth. In 1799, Joseph Fox was appointed dental surgeon at Guy’s Hospital.

I also found a couple of interesting letters from Jane Austen to her sister Cassandra from September 1813 (from Jane Austen’s Letters, Deirdre Le Faye, ed.), where she details a visit she made to the dentist with their nieces Lizzy, Marianne, and Fanny. The dentist, a Mr. Spence, is obliged to extract two of poor Marianne’s teeth. “When her doom was fixed,” writes Austen, “Fanny, Lizzy, and I walked into the next room, where we heard each of the two sharp hasty Screams.” In Dr. Johnson’s London, Liza Picard has an even lovelier account of how one extracted teeth: “The fearsome instruments designed to extract teeth usually wrenched them out sideways, once they had been loosened by careful hammering. Pulling perpendicularly without damaging the surrounding teeth and gums seems to have been beyond an eighteenth century dentist, even when he flexed his muscles, put the patient on the floor, and took his–the patient’s–head between his–the dentist’s–knees.”

There WERE some methods of cleaning teeth at the time. There were various powders and pastes on the market, which (much like Crest and Aquafresh today) makes great claims to brilliance and whiteness. But they were also made of things like gunpowder, lead, pitch and beeswax, which could wear away enamel. Pierre Fouchard (1676-1761, often called the “founder of modern dentistry”) recommended urine as a good cleaner. (BTW, those are some of his instruments in the pic. They look just like the pliers in my toolbox here at home). It was a common practice to scour the teeth with the end of a wooden stick, though I think this would leave splinters. And the wealthy sometimes had pretty little gold-handled brushes. There were also false teeth and even transplantation, should cleaning fail (I even came across a tale of a young and destitute Emma Hamilton, dissuaded from selling her teeth to make some money. Instead she went with a less repuatble method of fundraising, but one that preserved her looks a bit better!)

In the end, Jane Austen said she would not let Mr. Spence “look at my teeth for a shilling a tooth and double it!” Very sensible of her.

BTW, if I haven’t bored you enough here, I found an interesting (albeit rather “technical”) article in The British Dental Journal about an archaelogical dig in the 1990s concerning a church in Kent. This is the dental history of one of the unfortunate “specimens” found in the vault, a Viscount Whitworth, who died in 1825 aged 71. Now, I think I’ll go take one of those pain pills. All this thinking about teeth has made mine ache again. 🙂

To quote Dr. Smith from Lost in Space: “Oh, the pain! The pain!” What a very, er, uncomfortable topic!

Perhaps this is why heroes and heroines in Regencies are blessed with excellent teeth, as well as very good health in other respects. So that we, the readers, don’t have to think about it!

Thanks for the historical details though, Amanda! It restores my gratitude that I live in the modern age!

My, what a lot of exclamation points I use!

My teeth are aching too!

I have been going to the same dentist for about twenty years now. He’s the nicest guy, and very gentle. He also keeps asking when I’m going to write the dentist hero who rescues the heroine from her painful abscess.

I think it may be a while.

Love the film Topsy-Turvy. Can’t count the number of times we’ve viewed it.

And we quote some line or other from it nearly every day!