Horn Tooting and Evolution of a Sale

I blogged a few months ago on a post called Where do you get your ideas? about how a story starts for me, and I’m very happy to announce that that book, now called Chained, has sold–details were thrashed out by the agent and editor while I traveled to Atlanta–a great way to start the RWA National Conference! Or rather, an almost completely different version of that book has sold.

Then, the story was called, tentatively, The Story of Miss O. I renamed it Chained as I realized the story was about the English abolitionist movement. Here are the pics I found of the hero and heroine (courtesy of Elizabeth Vigee-Lebrun’s portraits of Russian aristocrats), although being my characters, they do not look nearly as cleaned-up and glamorous: 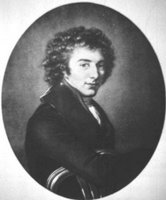 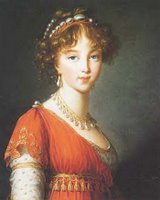 Now the editor liked the idea, she particularly liked the naughty goings-on that occurred in a carriage in chapter three, but she glommed onto something I was hoping to avoid because it involved real research, and gasp, I have a deadline of the end of the year. This year. My original story started off in England and after a while and many more naughty goings-on in a variety of locations, the action moved to a Caribbean sugar-producing island, where, um, more of the same took place, and then they sailed for home, by which time the hero/heroine are not speaking to each other. This is a two-month voyage. That’s a long, long sulk. This is not terrific plotting. It bothered me. I was afraid I’d write a book that contained something like this–Two months later, as they stepped onto English soil again… And I wasn’t really sure how it would end.

My local RWA chapter, bless their hearts, had a plotting session at one of our meetings. To a woman, they said I should have a raging mob with pitchforks and the hero performing heroic deeds to win the heroine. Um, yes, I said, but the English abolitionist movement wasn’t like that. It was housewives boycotting sugar, and earnest Quakers distributing pamplets and getting names for petitions–the Georgian equivalent of envelope-stuffing for a political campaign.

The editor–who of course zoomed in, eagle-eyed, on the terrible weakness of the original plot– told me she wanted it set on the Caribbean island, with the story beginning on the voyage out, and could I send her a couple of paragraphs on how I would rewrite it. Later that day, if possible, certainly before the weekend (this was the Wednesday of the week before National). I produced a cold sweat instead, went home, and thought about more sin in the sun and less about earnest Quakers in appalling weather. I thought about raging mobs. Raging mobs with machetes…a slave revolt. I sent an email to the editor the next day, she liked it, and she and my agent began thrashing out the stuff we writers are too timid to attempt. Less than a week later, the day before the conference started, we had a deal.

So now all I have to do is rewrite and write and go to see “Pirates of the Caribbean” because I can write it off as a legitimate business expense! Chained will be released in (probably) Sept. 2007 under the name of Jane Lockwood for NAL’s Heat line.

And now I really must write!

Congrats, Janet, and kudos for tackling a topic that’s rarely dealt with in romance. A true Risky triumph!

How exciting, Janet! Here’s hoping you enjoy “Pirates” – I came out of the theater with a new appreciation for the Commodore!

A belated, and second, congrats on the new deal, Janet. That is just great.

Is Lockwood after Jane Eyre? I’m guessing so, given the first name. No dummy me, huh?