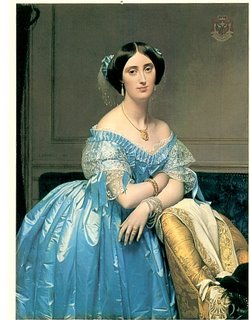 I have to admit, I’ve got nothin’ for my post today. I couldn’t come up with one single topic that was anything but totally boring. Maybe it’s the heat. It seems like at the end of summer, when it’s still hot (or very hot, as it is here–the temps have been in the triple digits for over two months straight now), and I’m longing for Fall but it’s nowhere in sight, I just get very lazy. It’s hard to concentrate on research and writing and work. One thing I’ve done far too much of in the last few days (okay, weeks) is read fashion magazines. I’m lusting for fall tweeds and boots and those cute cropped jackets, for dark lipstick and that elusive bottle of Chanel Black Satin nail polish (my new obsession).

So, I decided not to fight against my shallow current but go with it for this week’s post. I started wondering–who are some of the best-dressed women in literature? Some of the best descriptions of clothes and how they help define the womens’ characters? My method here was highly scientific–I scanned my bookshelves and pulled down books that I remembered as having some lovely fashions in them. Here’s what I found:

–Linda from Nancy Mitford’s The Pursuit of Love: Not just when she went to Paris and hooked up with Fabrice, who bought her that fab French wardrobe (“Linda had never before fully realized the superiority of French clothes to English. In London she had been considered exceptionally well-dressed…she now realized that never could she have had, by French standards, the smallest pretensions to chic”), but when she was a young deb, too. “Linda had one particularly ravishing ballgown made of masses of pale gray tulle down to her feet. Most of the dresses were still short that summer and Linda made a sensation whenever she appeared in her yards of tulle, very much disapproved of by Uncle Matthew, on the grounds that he had known three women burnt to death in tulle ball-dresses.”

–And Rose, Cassandra’s sister, in Dodie Smith’s I Capture the Castle (one of my favorite books from adolescence): Later Rose gets engaged to Simon (the object of Cassie’s crush), and has a vast and stylish trousseau, but I loved the girls’ early efforts, when they lived in “romantic” poverty. In an effort to make their clothes look new, they dye them all green, and Rose has their stepmother’s cast-off teagown, “it had been a faded blue, but dyed a queer sea-green…” I pictured it as a sort of tie-dyed mermaid dress!

–Flora, from Stella Gibbon’s Cold Comfort Farm: “Flora’s own dress was in harmonious tones of pale and dark green. She wore no jewels, and her long coat was of viridian velvet…Flora knew she did not look as beautiful as Elfine, but then she did not want to. She knew that she looked distinguished, elegant, and interesting. She asked for nothing more.” (In the great film adaptation, Flore wore in this scene not green but a sort of metallic-gold lace dress. Elfine still wore white satin, though)

–Of course, Holly Golightly from Truman Capote’s Breakfast at Tiffanys: “…she wore a slim cool black dress, black sandals, a pearl choker…there was a consequential good taste in the plainess of her clothes that made her, herself, shine so”

–Anna in Tolstoy’s Anna Karenina: “Anna was not in lilac, as Kitty had so urgently wished, but in a black, low-cut velvet gown…The whole gown was trimmed with Venetian lace. In her black hair was a little wreath of pansies, and there were more of the same in the black ribbon winding through the white lace encircling her waist…Now she {Kitty} understood that Anna could not have been in lilac, and that her charm was just that she always stood out from her attire, and that her dress could never be conspicuous on her. And the black dress, with its sumptuous lace, was not conspicuous on her; it was only the frame, and all that was seen was she–simple, natural, elegant, and at the same time gay and animated”

–And, from Girl of the Limberlost, Edith Carr (this was another favorite book when I was growing up, and, even though she wasn’t the heroine, I lusted after Edith’s ballgown at her engagement party. She bases her dress after a rare moth, the Yellow Imperial, that serves as a major plot point in the story): “…she stood tall, lithe, of grace inborn, her dark waving hair piled high and crossed by gold bands studded with amethysts and at one side an enameled lavender orchid rimmed with diamonds that flashed and sparkled. The soft yellow robe of lightest weight velvet fitted her form perfectly, while from each shoulder fell a great velvet wing lined with lavender, and flecked with embroidery of that color in imitation of the moth. Around her throat was a wonderful necklace and on her arms were bracelets of gold set with amethyst and rimmed with diamonds.”

And these are just a few. I left out Gone With the Wind, Wuthering Heights, and lots more. I didn’t even include any romances, because there are just too many (though a favorite is the green dragonfly-embroidered gown in For My Lady’s Heart, and the Maeve costume in Megan McKinney’s Lions and Lace). What are some of your favorite fashions in books, or stylish heroines?

“That’s not a dress, that’s an Audrey Hepburn movie.” (From the movie Jerry Maguire.)

Gosh, Amanda, I can’t remember! I do love fashions, though, and I love to dress my heroines in pretty clothes to the point of fearing I could bore the reader with too much detail.

I’ve never quite recovered from my nine-year-old delight in Amy March’s artistically madeover ball dress, at the party she and Laurie attend in Nice, in Part II of Little Women. Courtesy of Project Gutenberg:

“she put on Flo’s old white silk ball dress, and covered it with a cloud of fresh illusion, out of which her white shoulders and golden head emerged with a most artistic effect. Her hair she had the sense to let alone, after gathering up the
thick waves and curls into a Hebe-like knot at the back of her head.

Having no ornaments fine enough for this important occasion, Amy looped her fleecy skirts with rosy clusters of azalea, and framed the white shoulders in delicate green vines.”

Oh, good one, Pam! I also remember from “Little Women” the chapter where Meg gets a “makeover” from her rich friends at a party, and then lives to regret it. I always wondered “what’s the big deal Why shouldn’t she dress up and flirt if she wants to???” 🙂

I agree, Amanda. For all its virtues, LITTLE WOMEN sometimes really reeks of class resentment and the author’s barely suppressed anger at having had a feckless, penniless faux-philosopher for a father.

Other fun descriptions of clothing in fiction: the cyberpunk sci fi writer William Gibson is great at kick-ass women in tight black. He might even have invented them, back in the 80s when I began reading him and took my erotica pseudonym, Molly, from the female enforcer in NEUROMANCER who’s had mirror shades surgically embedded where her eyes should be. His latest, PATTERN RECOGNITION, is full of black high-concept clothing (a mustread for Megan, I should think).

And speaking of heroines in black, there’s always this wonder from STORY OF O (which is NOT on Project Gutenberg, but hey, I could transcribe this one myself till the cows come home):

“She decided on the jacket of faille. It was padded and quilted in large stitches, close fitting and hooked from neck to waist like the tight-fitting doublets that men used to wear in the sixteenth century, and if it molded the bosom so perfectly, it was because the brassiere was built into it. It was lined of the same faille, and its slit tails were hip length. The only bright foil were the large gold hooks like those on children’s snow boots which made a clicking sound as they were hooked or unhooked from their broad flat rings. After she had laid out her clothes on her bed, and at the foot of the bed her black suede shoes with raised soles and spiked heels…”

(Not even to get into that book’s ancien regime-inspired fetishware… but somebody stop me or I’ll be here all day).

Interesting take on Alcott, Pam! I’ve always ascribed her feelings about Meg’s “Vanity Fair” et al to her Puritan upbringing — yes, the family were frequently far-out and wacko as far as religion, philosophy, etc, but if you look at their beliefs (and the beliefs her books reflect) I think you see one very strong streak of Puritanism behind everything…

Yes, Cara, there is the puritanism — tell me about it, when I was a kid I was such an Alcott nut that I actually read PILGRIM’S PROGRESS. But I take Jo’s “infernal temper” seriously.

Especially in the light of Alcott’s sexy, furious stories about bad women out for revenge — not to speak of this anecdote from her family’s transcendentalist hippie commune days. When they lived (idealistically and very badly) at the Fruitlands community, the only beast of burden employed, according to Louisa, was her mother, Abigail Alcott.