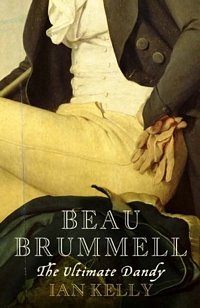 For fun, I’m reading Ian Kelly’s Beau Brummell: The Ultimate Man of Style (Free Press, 2006) and have discovered a couple of interesting facts. Or at least things I did not know.

According to Kelly, tailors during Brummell’s heyday tended to specialize. Gronow had said Brummell favored Weston as his tailor, but Mr. Kelly’s research found that Brummell frequented several tailors. The primary ones were Schweitzer and Davidson on Cork Street, Johnathan Meyer on Conduit Street, and Weston, the only one British born. He favored different tailors for different items of clothing: Weston primarily for waistcoats; Schweitzer and Davidson for his coats and greatcoats; Johnathan Meyer for the forerunner of our modern trousers that Brummell pioneered. 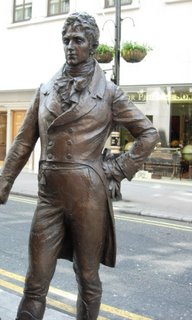 Kelly states that Brummell “wore slim-cut trousers or ‘pantaloons’ that flattered his famously long-legged frame. For daywear these were made of leather, mercerized cotton, or nankeen and plain cotton in summer. Evening wear necessitated black, according to the new asthetic, and Brumell wore sheer black silk jersey, made up as breeches for Carlton House or the theatre, and as pantaloons for the clubs.”

I guess that answers my question of a couple of weeks ago about what color my hero’s breeches should be.

Brummell, like so many other gentlemen, purchased his hats from Lock & Co. The shop still exists today and in it you can actually see Wellington’s and Nelson’s famous hats. 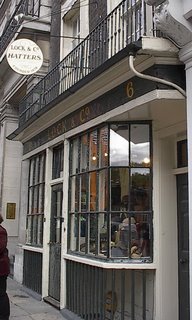 Here is an image attributed to Brummell, but I am not at all certain it is the Beau. What do you think? 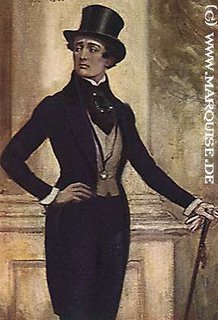 I much prefer this image. 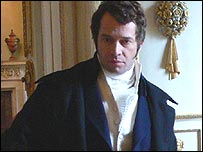 James Purefoy as Brummell!
The BBC says: “The Taunton-born actor is heading a star cast in BBC FOUR’s Beau Brummell, a new drama at the centre of the channel’s The Century That Made Us season focussing on the 18th century, to be screened on Monday 19 June, 2006.”

Oh, don’t you wish they would air all the shows in the US???
What do you think about James Purefoy as Brummell? He certainly wears the clothes well!

One more important fact about Brummell.
Kelly could find no evidence that Brummell wore underwear.

I loved this book, Diane. Sucn a fascinating character. And such a wasted life! I was wiping away tears by the end. But I will confess that it inspired me to use the Beau as a continuing character in my next series. Of course, I will set it early in the century, c1802ish, when he was still young, handsome, and rich.

One new detail that struck me in this book was Kelly’s estimate of Brummell’s size. Based on records from tailors and other minutiae, he figures Brummell was between 6′ and 6’2″ tall. And based on records of gentlemen weighing themselves on the scales at Berry Bros on St James Street, the Beau seems to have averaged around 180 pounds. More tall and well-built than I had imagined. Another reason I’m going to use him in my next series! And another reason that he would have made such an impressive figure when he entered a room. He must have towered over most other men.

Oh, Candice, I agree with you. I never knew what led to Brummell’s death – a real tragedy and a waste. I too was surprised that he really did cut a dash on St. James Street. He does look snooty in engravings and caricatures, but perhaps he really did look like James Purefoy!

Hmmm…I think this one came in at work the other day. Might have to go grab it. Sounds interesting.

I’m surprised as well that he was tall. For my money, he was one of the inventors of the modern ironic sensibility as well as of male dress.

My favorite anecdote is from an 1844 magazine story:

“An acquaintance having, in a morning call, bored him dreadfully about some tour he made in the North of England, inquired with great pertinacity of his impatient listener which of the lakes he preferred? when Rrummell, quite tired of the mans tedious
raptures, turned his head imploringly towards his valet, who was arranging something in the room, and said, Robinson. Sir. Which of the lakes do I admire? Windermere, sir, replied that distinguished individual. Ah, yes,Windermere, repeated Brummell, so it is, Windermere.”

Which to me presages somebody or other’s remark that we let our servants do the living for us. Brummell went further and had his valet do the thinking (which was so much less important than his own concerns).

Go for it, Candice — put him in your series. But keep his edge, please.

FWIW, that image “attributed” to Brummell looks more early Victorian to me.

As long as the new movie bears no relation to the 1954 movie mangling called “Beau Brummell,” I’ll be happy. 🙂

Ooh, Cara! Thanks for the info. When is the movie being released on TV? And on which channel?

Candice, I figured that Brummell was the reason so many Regency heroes “tower over other men.” The average height back then was closer to 5’8″, not 6′.

Diane, you always have such fantastic posts!
Great photos. I knew I was right about the clothes history. 😉 All I have to say is, an attractive tall man, wearing nice clothes and no unders, oh what a dream! God help me, why does that sound like James Pickerloy? fashionably dressed and walking out in public with no unders(mallory who daydreams alot about handsome men with no unders alot *sigh*)..hmm… 🙂

Yes it is sad how often the greatest people have their lives end tragic. Makes a hauntingly sad story and a great one though.

“How about a pair of pink sidewinders
And a bright orange pair of pants?
You could really be a Beau Brummel baby
If you just give it half a chance.”

Well, that possibly Victorian image is probably supposed to make him look supercilious. Looks more like he has a tummyache.

But the image from the new movie is quite promising.

Todd, I wonder how many people singing along with Billy Joel know what that lyric is about?

In re: James Purefoy as Beau Brummell… I had the good luck to see this t.v. show. Purefoy is divine — and the Beau-at-his-toilette scene is not to be missed. Not full frontal, but full backside, which is good enough.

The show was disappointing in that it ended with the Beau fleeing to Calais, with the postcript about dying in penury.

One of the things I learned — among the many tailoring details — was that the Beau had had a teenage thing with Julia Johnstone, Harriette Wilson’s friend and later rival.

Sorry that last comment came through twice! I either lose ’em or repeat ’em.

Wanted to add that I meant the author of the Brummell book, Ian Kelly, and he was unhappy about the US edition of his book, which is much shorter than the UK edition. (It was the UK one that I read.)

He urges readers to seek out the original, which also has full color reproductions instead of the black and white. He’s now working on a biography of Casanova. Ian is an actor and appears frequently in London doing bits from his Careme bio and the Brummell. He also speaks at Georgian Society and other functions. (Coming up is a gig at the Maritime Museum in Greenwich. I have the details if you’d like to e-mail me at drmwk@juno.com)

I most certainly prefer that last pic too. . . 😉 I was going to say I have to look up that book if there is ever a next time I set foot in a bookstore (hoping it’s paperback and not hardcover! LOL), but seeing Jo mention he wasn’t happy with the US version made me think for me, I’ll take a shorter version just to get started with any bio on BB. . . although what the heck’s the point of having a shorter version for here? Hmm, anyway, I guess I should avoid the movie that came out in 1954. . . hopefully this newer one will pop up in the US one of these days. 🙂

Elena, thanks for taking care of that little “burp” 🙂 Of course, I managed to get a typo in there, too. Meant “met” instead of “meant”. I have never been able to proof my own work 100%…!

Please, don’t avoid reading the US version just because the UK version is fuller and has color pictures! I don’t think Ian would want that. He was just disappointed, but the story is still there. It is a wonderful, wonderful biography.

And James Purefoy — whom I first spotted in The Knight’s Tale playing a small part as the Black Prince — is delicious.

This sounds like a great book–thanks for posting about it, Diane. I rather think the image of BB is a late 19c version.

I don’t think we need get too excited about the underwear, or lack of it–men used their shirts as an under-layer then. I guess he didn’t want a visible panty line, tho I think the effect with the silk knit trousers might have been rather, er, interesting.

Jo, I’m pea green with envy that you got to see the TV movie in England! Mallory and I both want to see that underwearless scene, don’t we, Mallory?
I also had an “oh darn it” moment to learn there was an even better UK version of the book! Oh well. I am enjoying this one enough for now.
Kelly did mention the connection with Julia Johnstowne, but it sounded like a teenage crush on Brummell’s part.

I sure do like seeing scenes of men without unders ;)so nope , even from being recent back home in merry olde england where you get broadcastings of James Purefoy’s underless scenes, I didn’t get to see it….methinks I need to have someone tape it, even if only a small clip of the underless scene. (mallory who likes seeing mens bottoms as a hobby) 😉