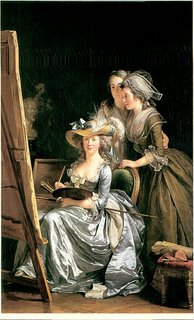 Last week, we had a lot of discussion about the lives of famous courtesans after Pam’s interview. And a few weeks ago Elena gave us a great post about women scientists in history. I always find the lives of people–especially women–who make their own way in the world against tremendous odds very fascinating. What was it in them that gave them such strength and tencacity, such faith in themselves? So, I was delighted to come across a new book, The Women of the House: How a Colonial She-Merchant Built a Mansion, a Fortune, and a Dynasty by Jean Zimmerman. I devoured this story of self-made success in just a couple of days. (OK, I know I’ve been talking too much about books I’ve bee reading, but I’ve had such a great run of reading luck lately!).

While neither Regency nor English, Margaret Hardenbroeck Philipse could easily star as the heroine of her own novel. She came from Holland to New Amsterdam (New York) as a very young woman in 1659, with an unusual job–she was a factor, or business manager, for a well-to-do merchant cousin, managing his New World dealings. But she was very ambitious and highly energetic, and didn’t stay a factor for long. She built up her own shipping business into a fleet that carried furs, sugar, and slaves all over the world, owned real estate from Albany to Barbados, and became one of the richest people in the colony–all while marrying twice (the first one didn’t live long, the second was pretty ineffectual), raising five kids, and keeping an impeccable household (she was especially proud, as most Dutch women were, of her bright white linen). It’s not a perfect story–there was marital discord, and the aforementioned slavery dealings (plus the author calls her “the she-merchant” way too often, making me envision the old She-Ra cartoon from when I was a kid), but it is a fascinating one.

Of course, Margaret’s ambition was helped by the fact that she lived in an extraordinary moment in time and place for women’s rights. I know very little about Dutch history, having concentrated mostly on England and Italy, and what I learned in this book was very interesting. The Dutch, while their social manners were often rough-edged and Brueghel-esque compared to the slick English and French, were very forward thinking in their gender dealings (and religion, too, but that’s a different story). Commerce was everything, and women could run a business as well as men and thus add to the national prosperity. Free, public primary education (reading, writing, figures) was available to all children, male or female. Women who held jobs like Margaret’s as a factor were not unique in this atmosphere of high literacy rates and intense commercial activity.

Dutch matrimonial laws were the most liberal of the time, including two different types of marriage a woman could choose from. There was “manus”, which is the sort we usually associate with the time period. The woman assumed the status of a minor under the guardianship of her husband. The second option was “usus”–a wife retained all the rights she had as a single woman (which were the same as any Dutch man), and the marriage was a partnership of equals. This was the marriage agreement Margaret entered into.

Dutch inheritance law also prohibited parents from relying on gender or birth order when apportioning property in wills. So, daughters were not deprived of an inheritance, and widows received at least fifty percent of an estate. Dutch law also gave unwed mothers the right to prosecute the alleged father in a paternity suit (“vaderschapsactie”), or force him to marry her. If he was already married, she could demand he pay her a dowry and compensation for childbirth expenses, as well as child support. A husband’s adultery, abandonment, or venereal disease gave his wife grounds for divorce. If a wife believed her husband was squandering their property, she had legal recourse to request her half of the estate plus the return of her dowry in full.

Of course, all this started to change drastically as soon as the English took over the colony in the 1680s, and this brief moment of women’s rights would not be seen again for 300 years. But Margaret Hardenbroeck took full advantage of this, building a vast empire that would allow her descendents to live at the wealthy pinnacle of New York society until the Revolution. She did it all in a relatively short life (she died at 53), and all on the force of her own ambition and intelligence. Her story was very absorbing, and I would love to read about someone like her in fiction. đź™‚

What are some “heroine types” you’d enjoy seeing more of? Any real-life examples you can envision as romance heroines?

5 Responses to Women of the House