Nothing–directly–to do with the Regency, but what else is new. We all posted our beach reads a couple of months ago, and although I haven’t been near a beach I have read, actually re-read, one of the books I listed–Our Mutual Friend by Dickens. His last published book, it was published in installments, and I suspect he was pretty much a pantser. The Penguin Classics edition has his chapter by chapter notes, and he takes some astonishing liberties with his plot. He introduces new characters one third of the way through a book already crowded with a cast of dozens. There’s one character who has a long, introspective monologue telling you a key plot point that none of the other characters know, something that made me grit my teeth and mutter “Not fair! No one else could get away with it.” True, because no one else writes like Dickens. No one else breaks the rules with such flair and chutzpah and good humor. 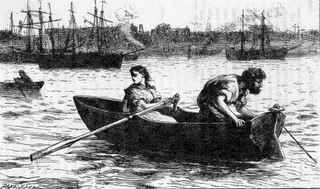 Another “writerly” thing–using setting as characters. This book is haunted by two very strong, atmospheric settings–the river Thames, both a destroyer and a means of rebirth, and the mysterious Dust Heaps that produced a fortune for their owner. What’s in the Dust Heaps? Good question. Secrets and, probably, excrement. It’s possible to go way overboard on Freudian/Marxist interpretations of what OMF is about, so I’ll desist. But one of its themes is about the effect of money–too much, too little–and what it does to people.

But what struck me most about OMF was how much I wanted the female characters to be different. It’s a complex plot, and there are two heroines. One, Bella Wilfer, has a scene that reminded me a little of Anne Elliot’s declaration in Persuasion, where she publicly states that she loves the man she once rejected, even if he no longer cares for her. Anne’s declaration is understood only by Wentworth, and it comes from hard-won self-knowledge and trust in her own feelings. Bella’s is equally impassioned and sincere, but she’s been manipulated into it by a male character, her patron Mr. Boffins (who has inherited the Dust Heaps)–who does it entirely because he cares about her. So she goes from being an infantilized daughter to the wife of another man who then deceives her–in the most playful, charming, kind way–as to the extent of his real wealth.

The other main female character, Lizzie, is interesting because she’s working-class and as sexual a female being as Dickens ever wrote about. How he does it is interesting–by omission, mostly, but it works. She’s pursued by an upper class, wealthy man whose intentions may or may not be honorable–he doesn’t even know himself. You’d think a woman who rowed a boat on the river while her father dredges up corpses could handle this situation–heck, even the genteel Lizzie Bennett could and did. But no, she too has a male mentor, another father figure, who tells her that she isn’t strong enough to withstand the gentleman’s advances, and advises her to flee.

It’s interesting that Jane Austen, with her stalwart, principled heroines, was read as widely as Dickens. So were those other proponents of strong, passionate female characters, the Brontes and George Eliot. Why? Because Dickens delivers. Even a troubling book like OMF has so much–wonderfully named characters, sympathetic and grotesque, and usually both; scenes of melting tenderness and silly comedy–oh goodness, I’m going to say all human life is there, but it’s true. It must have been fifteen years since I read this last, but the good bits are still good. Dickens is the consummate storyteller, the puppeteer pulling the strings of his characters and his readers.

So what’s your favorite Dickens book/tv or movie adaptation?

I love the two-movie adaptation of “Little Dorrit” with Derek Jacobi. Actually, I love pretty much anything he’s in — he’s utterly brilliant.

I also really liked the BBC version of “Martin Chuzzlewit” done about ten years ago.

As to the books…. I haven’t read several of Dickens’s major novels…and some others, I read a long time ago. So it’s hard to say! The one I loved the best at the time was probably “Oliver Twist” — but I read it at age thirteen, so who knows what I would think now!

I will say that my favorite novel was *not* “Hard Times.” 🙂

I remember A Tale of Two Cities was one of those books I read as a kid that really made me love reading. I read A Christmas Carol a couple of years ago and enjoyed it.

I read “Our Mutual Friend” several years ago, because (I am embarassed to admit) I had seen and enjoyed the BBC television adaptation so much. I really loved the novel, too; and while I haven’t read a large amount of Dickens (though of course, one of his novels could be considered a large amount), I still have very fond feelings about OMF.

I also liked the adaptation of “Martin Chuzzlewit” very much, though the novel not quite as much.

“A Christmas Carol” has been adapted so many times and ways that probably almost everyone has a favorite. I have three: the cartoon “Mr. Magoo’s Christmas Carol” from when I was a kid; Patrick Stewart’s one-man show, which I saw about twelve years ago when I was still a student; and most recent (and most bizarre), “A Mulholland Christmas Carol,” which is a musical version of the Dickens tale with the Scrooge character replaced by William Mulholland, who built the California aqueduct system, and is most famous nowadays for the terrible St. Francis Dam collapse that killed many people. You kind of have to be from Los Angeles to enjoy it fully, but if you are it’s hysterically funny.

I think I’ve read every Dickens novel, but I haven’t read him in years, like maybe 20.

I loved the Pickwick Papers. Great Expectations was amazing. I didn’t like Little Dorrit so much. And I love A Christmas Carol with George C. Scott. Definitely my favorite version.

You just described my favorite Dickens and you did a wonderful job. Very insightful and intelligent. Great post!!!!!!!

After Our Mutual Friend, I like Great Expectations and Bleak House.

And of all of these, I liked A Tale the best. I’ve read it in all published versions I’ve been able to lay my hands on. This story ranks up there with The Scarlet Pimpernel, The Count of Monte Cristo, and The Three Musketeers for me.

It reminds me of the recent movie “The Squid and the Whale,” where the teenage son says he has to read Tale of 2 Cities, and the “intellectual” father declares it’s “minor Dickens.” 🙂

I also have a fondness for Dickens, and this post makes me want to reread him (which I haven’t done in ages!). My favorite is “Bleak House,” and I very much enjoyed the recent Masterpiece Theater series (Gillian Anderson was quite surprising). And my favorite “Christmas Carol” is the Muppet version. 🙂

You have to love Blogger, devouring posts… In answer to my own question, my favorite Dickens is David Copperfield and I love the 1935 movie that had W. C. Fields as an astonishingly good Mr. Micawber. As for recent tv adaptations, I thought Great Expectations, with the lovely and talented but impossible to spell Ioan Gruffudd, was brilliant. There’s also a black/white movie version made in the 1940s directed by David Lean which is very good.
I managed to miss the tv adaptations of Our Mutual Friend and Bleak House but I hope I’ll get the chance to see them.

I also loved the TV BLEAK HOUSE — Gillian Anderson was riveting, besides almost unbearably beautiful. I read OLIVER TWIST this year, mostly to see what was behind the very disappointing movie — I expected more from a movie directed by Roman Polanski, especially since the workhouses really were like concentration camps (the workhouse shots here were grim but rather bland, though I did like Ben Kingsley as Fagin).

I loved OUR MUTUAL FRIEND when I read it 20 or more years ago, but could stand to read it again. But I think next up for me is LITTLE DORRIT.

However, if I don’t get to that, I’ll be reading THE PICKWICK PAPERS next summer, at The Dickens Universe, a smart, wonderful, week-long sort of adult Dickens summer camp put on by the University of California at Santa Cruz. My son (a graduate student in Victorian studies) was part of the staff (sort of a camp counselor) there last summer, which was how I learned about it. You can find out more here.

And maybe I can get my son to share some of his expertise re Dickens’ horrendously weak women.