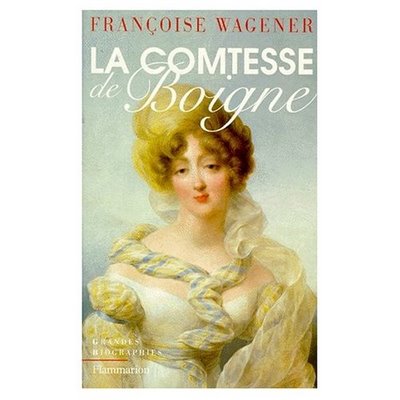 Recently I was browsing Ebay and I put “1815” in the search field (I do this way too often!). This book popped up with only minutes to go on the auction and it was going for practically nothing, so I had to bid on it. It arrived a couple of days ago – not this version with the lovely cover, but Volume II of a three volume set- the memoir covering her life from 1815-1819.

Because it is Volume II, there is no introduction so all I know of la comtesse so far is from a website review “Born Adele d’Osmond in 1871 (I think he means 1771), daughter of a diplomat, lady-in-waiting to royalty, married to a General, she knew (or knew of) all the major players in this historical epoch.” I do not even know if the lovely portrait on this bookcover is la comtesse.

This volume begins with her traveling in France and staying for a few days in Lyon. She tells about a woman who visited her maid there, a woman named Marion, who had only one arm. Marion had been a servant to a vicar who had been imprisoned “during the Terror,” and every day Marion brought the vicar food that she carried in basket.

Here is the countess’s maid relating the story: “One morning, when she had been brutally repulsed, her perseverance in requesting admission to the prison exasperated one of the ‘sans culottes’ who was on guard; he proceeded to assert that her basket certainly contained evidence of a conspiracy against the Republic, and attempted to seize it. Marion, fearing that her poor dinner would be plundered, attempted to defend it. Then one of these monsters…struck off the arm which held the basket with a blow from his sword. Roars of laughter greeted this action. Poor Marion left her hand and half her forearm on the pavement of the prison, wrapped up the bleeding stump in her apron and came home to us….“

I think it is remarkable enough that Marion could have walked home with half her arm cut off, but here is the kicker. After her wound was dressed, Marion fixed another basket full of food and went back to the prison to deliver it to the vicar–that same day! She wrapped up her arm in lots of linen and put it in a sling and the vicar never knew she’d lost her arm until long afterward, when he was freed from the prison.

What incredible strength and endurance people must have had in those times. No ambulance. No emergency room. No morphine drip. No time to even mourn the loss of a limb. If I wrote that scene in fiction, no one would find it credible.

Can you also imagine how terrifying France must have been if one could be accused of ‘conspiracy against the Republic’ for merely carrying a basket of food? It must have been a perpetual nightmare.

Marion’s incident certainly hooked me on reading la comtesse’s memoir, but (alas!) I must put it down. I’m reading Memoirs of a Highland Lady, because the book I’m working on now, Mills and Boon/Harlequin Historical book #5, creatively known as “Tanner’s story,” is going to be partly set in Scotland. So far Elizabeth Grant, the Highland Lady, is remembering London….sigh!

Do you have any other memoirs or biographies to recommend to me? I love to learn of “our period” through the eyes of people who lived it.

Stop tempting me! My research TBR pile is already HUGE (both Brummell and Perdita are still waiting for me to get to them).

I definitely enjoyed Harriet Wilson, but I expect you’ve read her. 🙂

One book of letters I love, though I’m not sure it’s easy to find: LETTERS FROM LAMBETH, edited by Joanna Richardson, 1981. It’s the letters to and from the Reynolds family of Lambeth. The son, John Hamilton Reynolds, was a hopeful poet, and ended up a close friend of Keats. What I love best are his letters from when he was young: very funny. Example:

“The arrival of the Shrewsbury Chronicle has spurred up my head & collected the few grains of wisdom that wandered about my spacious Scull into one large grain & from that LARGE GRAIN you are to expect whatever comes upon this Paper.”

Ooh this was a dangerous question I asked—Letters from Lambeth, huh? Kalen and I are already looking for that one, aren’t we, Kalen?

abebooks.com is one of my favorite sites. I can almost always find the out of print book I want there!

Ebay is a dangerous, dangerous place. 🙂 I couldn’t have resisted that book, either, Diane just from the cover alone!

The books sounds fascinating! But I would just like to take a moment to say…

…OK, back now. 🙂 It’s always dangerous to browse. Why, I went to a bookstore only this evening and came back with a sack full of books. Like I needed any more…sigh.