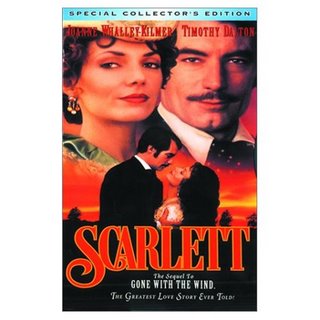 There are guilty pleasures, and then there are pleasures that are just wrong.

One of my guilty pleasures is watching historical movies, no matter the quality. A friend from high school and I (visitors to my blog will know her as the Super-Smart Lawyer) settle down on my couch after my son is asleep, crack open a bottle of wine, and indulge. We’ve seen two versions of Wuthering Heights (Olivier and Dalton), Clive Owen in Return of the Native, Century and King Arthur, Jane Eyre (just the Dalton version so far), and of course some others I can’t recall–we’ve been doing this for awhile now.

My recent Sean Bean obsession, fueled by my viewing of the Sharpe series, has now led me to this: Scarlett. It is the 1994 mini-series based on Alexandra Ripley‘s sequel to Margaret Mitchell‘s Gone With The Wind. He plays a minor character in it, and to my surprise, I discovered it starred another historical favorite, Timothy Dalton.

But when I got it home from the library, I felt a little queasy. It’s six hours long! It’s a TV mini-series! Based on the sequel to a much-beloved book! If I do watch it, it will be alone, so I can hide my shame. My friend does not deserve six hours of cheesy TV melodrama.

Has anyone seen it? Can recommend it? Or not? And what is your guiltiest pleasure movie?

But my guilty pleasure movie is LadyHawke with Rutger Hauer, Michelle Pfeiffer and Matthew Broderick. The story’s not bad, but, dear lord, the SOUNDTRACK!!

Lots of 1980’s boopidie-doo-bee electronic Euro dance crap in a Medieval movie? Starring a Friesan horse–let’s not get into my feelings about Friesans, shall we? (Historically accurate, my a$$.)

But I do love the movie, nonetheless. (Must be the hawk…)

There’s nothing wrong with Ladyhawke, Suisan! It is obviously set in a fantasy world, in which horse and musical development were quite different than in our own world. 🙂

Ummmmmmmm, the Friesian horse might be one of the few accurate things about that movie (which I will totally admit to loving, but not as much as I love IMPROMPTU, which is also filled with Friesians).

Friesians are mentioned as desirable as early as the 13th century. There’s certainly nothing about the breed that would be anachronistic. I mean it’s not a mustang or a Paso Fino.

The most accurate horse you can use for most Medieval destiders is a Friesian or one of the large German Warmbloods (per the reeanctors I know who joust and such).

Scarlett the miniseries has some good moments in it. Course, I don’t exactly remember what those were so that may not be much help. I actually liked the ending of the book better than the miniseries – major changes there. The first half or so was pretty much the same if I remember correctly.

Problem is, I’ve never been that crazy about Dalton, so I had a lot of problems with him as Rhett. She, whatever her name is, wasn’t all that bad to me as Scarlett.

Oh, and my favorite guilty pleasure movies is THE FIFTH ELEMENT. What, your were expecting a Regency? 😀

Oh, I love Impromptu! (I know this has nothing to do with Megan’s post, but I just had to say it.) 🙂

Alas, never saw that one, the original or even read the original or sequel. LOL 🙂 Never wanted to read or see Gone With the Wind, actually. LOL 🙂 Guilty pleasure. . . hmm. . . I can’t see most of my DVDs over there, but out of what I can see, I think the movie Avengers could be one. I got it because of Sean. . . sighs. . . and I really liked it. But I never saw the original series or anything like that, so I had nothing to compare it too. But looking at amazon.com at the reviews, many people really didn’t like it. Others said though that they liked it and is better than people think. Oh well, best I got for you. LOL 🙂

Megan, it’s funny that you blogged about this right now. I have just sent out invitations to a bunch of friends for a Classic Books on Film party at my house. We’re doing P&P for starters and if it goes well, I’m going to make a regular thing of it.

As far as guilty pleasures, I probably have some but I’m just too clueless to know it! I love Ladyhawke, music and all–it’s just fantasy to me.

I have heard there are film versions of some of Barbara Cartland’s Regencies. Now those sound like true guilty pleasures! Anyone seen them?

Myretta Robens sent me a copy of Cartland’s The Lady And the Highwayman, starring a woefully miscast Hugh Grant and also Emma Samms.

It was so terrible it wasn’t even a pleasure, although I felt guilty watching it for even five minutes.

And Elena, your idea sounds like what I do, only more formal, less wine.

That Cartland movie still sounds like fun, something to watch with the proper accompaniments: wine in a box and cheese doodles, maybe?

I’ve seen two of the Barbara Cartland adaptations — one with Helena Bonham Carter, plus the one with Hugh Grant, and all I can say is — ouch.

Far From the Madding Crowd with Julie Christie, Terence Stamp, and Alan Bates when they were all tender young things, directed by John Schlesinger. But it’s actually a good movie, so does it count?
Janet

Ah, yes, the Barbara Cartland movies! I love them–with the exception of the Hugh Grant as Restoration highwayman one, which was just painful. 🙂 I love Duel of Hearts, where the heroine disguises herself as a governess (or companion?) in order to warn the hero that his eeeevvvil cousin was out to kill him. Somehow no one ever wondered why the governess/companion could afford to wear silk gowns and jewels all the time. Hmm. The other was A Ghost in Monte Carlo, equally fun and cheesy. 🙂 I would call these my guilty pleasures.

I hated Scarlett the miniseries almost as much as I hated the book (which I never finished). And yes, I too have seen all three Barbara Cartland adaptations. I think I even still have one on tape. The best was the first one with Timothy Dalton (how does he always end up in these things?). Another guilty pleasure which isn’t a historical is The Beautician and the Beast with Timothy Dalton. If you want to watch a historical movie with a heroine who is too stupid to live, pick up Tilly Trotter, one of the many Catherine Cookson TV movies. In fact, Sean Bean was in the very first one that I saw. I think it’s called the 13 Streets or something like that.

I love Impromptu also! And LadyHawke–well, I can watch it and marvel at how amazingly beautiful Michelle Pfeiffer is. 🙂 Not sure that either qualifies as a guilty pleasure, though…

For me, I blush to admit that I actually liked the movie Starship Troopers, even though it totally butchered the novel it was based on. It was practically a parody of itself. And I quite liked the movie Equilibrium (with Christian Bale and Sean Bean). But I think this is my guiltiest movie pleasure: Cutthroat Island (with Geena Davis), which apparently no one but us ever actually saw. 🙂

I’ve watched the series, Scarlett, and I liked it. I thought Timothy Dalton was great as Rhett, and I actually liked the story. Sean Bean is the bad guy.

Those Barbara Cartland movies are my guilty pleasures. I am laughing as I write this because I just watched The Ghost of Monte Carlo which is my favorite. I love those gray pearls!!!!!

The grey pearls! I’d love to have that necklace. Wouldn’t say no to one of her fluffy grey chiffon gowns, either. I love it when she tries to climb out the window and escape the villain while wearing one (along with high heels) 🙂

I love the Poldark series, based on the books by Winston Graham. It’s set at the end of the eighteenth century – if you haven’t seen it, it’s a must see.

Mmmmmmm, Poldark. My mother must have watched that (and read that) a thousand times when I was a kid.

About “guilty pleasures” I don’t know (if it is a pleasure why spoil it by feeling guilty), but if you want suggestions for historical movies, I am just bursting. If you like P&P you should definitely try “North and South”. No, not the one with Patrick Swayze. This one is based on Elizabeth Gaskell’s book (Victorian) and unfortunately is not very well known in the US because it was only shown on BBC America. But it is available on DVD and it is SO GOOD, no guilt whatsoever!!! You have to watch it! (You’ll thank me later.) Richard Armitage does for N&S what Colin Firth did for P&P.

If you like Sean Bean, how about Sean as “Lady Chatterley’s Lover”? Naughty, naughty! – And if you liked the “Sharpe” movies, have you tried “Horatio Hornblower” (8 movies).

I just love Johnny Depp in period costume (and I don’t mean pirate). Though it is rather dark as the title suggests, I somehow really like “From Hell”, and it has an interesting theory on the whole “Jack, the Ripper” mystery. – One of my “feel good” movies is “Much Ado About Nothing”. I especially love the opening sequence, the whole symphony of the approaching riders, the bathing scene, until the two parties meet in the courtyard.

I did see that “Scarlet” miniseries when it aired originally. As I remember it was okay, I didn’t love it or hate it. I mainly watched it for Timothy Dalton because I just LOVE him as Mr. Rochester.- BTW, believe it or not, Ralph Fiennes is my favorite “Heathcliff”. This version of “Wuthering Heights” actually has kind of a happy ending, though not for Cathy and Heathcliff, of course. They didn’t mess with the story that much. But it appeals to my romance reader’s heart. Maybe I should feel guilty about that one?

Whenever I come across “The Winslow Boy” on cable I end up watching it, mainly for Jeremy Northram (de-li-cious). The final scene/dialog is IMO one of the most memorable. It is the kind that makes you want to know what happens afterward.

Okay, one movie that is based on a romance novel, not even a historical (though it has some WWII flashbacks), that I may feel a little bit guilty about liking is “Tears in the Rain” with Christopher Cazenove and a pre-”Basic Instinct” Sharon Stone.

I could go on and on. So many movies to watch, so many books to read! Now go get “North and South”!

Hahahah! My Sean Bean obsession goes back years, and I have a pirated copy of Scarlett with ONLY his scenes. Believe me, it’s better than slogging through the whole 6 hours. Once his character was killed off, I stopped watching it when it first aired.

All historical movies are pleasures for me, but this one is probably one of my guiltiest. Thankfully I have my shortened version when I want a Fenton Fix.