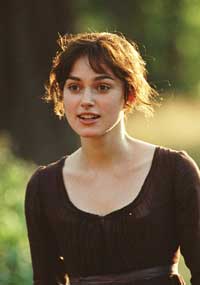 This week, the Risky Regencies are giving away two copies of the new 10th Anniversary release of the BBC/A&E Pride and Prejudice, which stars Colin Firth and Jennifer Ehle. This limited edition includes both the DVDs of the award-winning miniseries and the illustrated companion book. To learn more about this very special edition, visit the A&E Online Store here.

To enter, all you have to do is put a comment on any of our Risky Regencies posts from this week. Full rules are here. 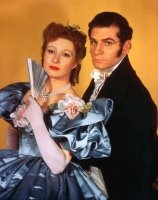 Welcome to Friday’s Edition of Who Wants To Be A Regency Heroine! 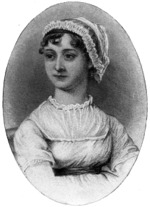 One of the best things about Jane Austen‘s characters is that they behave like real people do–they’re insecure, and stubborn, and willful, and shy, and flirtatious, and easily persuaded, and controlling.

And that’s just the heroines. 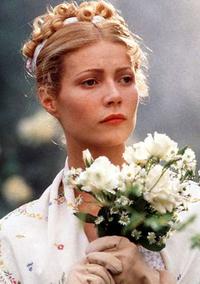 So today I’d like to ask a two-part question:

Which Jane Austen heroine are you most like in real life?

Which Jane Austen heroine would you most like to be?

For me, the answer is simple: I am most like Anne Elliot of Persuason, and I would most like to be Elizabeth Bennet of Pride and Prejudice. I’m easily persuaded, shy, able to deal with a crisis quietly and efficiently and, let’s face it, I’m not so young. I’d like to be witty, smart-mouthed, stubborn, fierce in defending my beliefs, and 18 again.

But perhaps you’d like Emma‘s assuredness? Maybe, you lucky thing, you already have that? Maybe you’ve got Marianne Dashwood‘s impulsiveness? Maybe you wish you had more of her sister Elinor‘s reserve? Or vice versa?

Bonus points if you want to mention which Jane Austen portrayal you’d like to look like: Keira, Gwyneth, Jennifer, Amanda (Root, Persuasion), Greer, Emma (Thompson, Sense & Sensibility), Kate (Winslet, Sense & Sensibility). Or some other portrayal my Friday morning brain is not recalling (I’d choose Kate Winslet, btw, but honestly I’d be happy to look like any of them.)

Good luck, and come back on Sunday evening to see who’s won these fabulous prizes!

As to which Jane Austen portrayal I’d like to look like: frankly, they were all beautiful and charming, and I really can’t choose. But since Ehle as Lizzy’s my very fave, I’d choose her if I really had to.

I am probably like Elinor or Anne Elliot…I wish I were more like Emma or Elizabeth…and I wish I looked more like Keira (or any of them).

Man, that’s a difficult question, I’m some of each of them … I can be reserved, shy, innwardly thinking and I can be visibly passionate, bold, an extrovert.

However, I suppose I am most like Lizzie (with plus age- and to be honest it took those yrs to get there!)

I’m a people person and get energized being in a group, but I also don’t have to take over.

I feel strongly convicted about things and if something upsets me or butts up against those convictions, I express it- although, admittedly it takes me awhile to get there! But when I do, damn sure the other person knows how I feel!

I have told my bf off when he needs it ðŸ˜€ (like Lizzie did when D’arcy initially proposed) and he stands up to me in much the same way D’arcy did with her.

With all that I’m not a bulldozer (like Emma seemed to be). I don’t like to interfere in other people’s lives.

My friends mean a lot to me, I have a few Jane & Charlotte’s in my life whom I feel very protective of and who make me smile- as well as whom I share my inner thoughts with.

So yeah, I think I am most like Lizzie.

But you know who commands the more respect from me? The Elinor’s and Anne’s. It touches me deeply when they find love!

I would have to say Iâ€™m most like Jane Bennet. Quiet and reserved in person. Iâ€™d most like to be Elizabeth Bennet. Sheâ€™s confident and has a sense of humor, and she gets Mr. Darcy. Iâ€™d like to look like Keira Knightley. I think Keira is gorgeous, except for her sometimes weird smile. *g*

I think Iâ€™m somewhere in-between Eleanor Dashwood and Lizzy Bennett. Iâ€™m not quite as reserved and responsible as Eleanor, and Iâ€™m not quite as resolute as Lizzy (though I do share her abiding sin of making snap judgments and sticking to them; I like to think of it as trusting my gut).

The one Iâ€™d most like to look like is Kate Beckinsale. I mean come on, did you see UNDERWORLD?

I love Emma’s character in every way!

I’m most like Elinor and Lizzie would be the Jane Austen heroine I’d most want to be. As to which Jane Austen portrayal I’d most like to look like, it’s a tough choice but I’ll say Kate Winslet.

I think I am most like Emma. Outwardly confident, but turn a blind eye to my faults. Easily hurt but not willing to show it. Also, I think I know what is best for everyone.

I am similar to Anne Elliot but it would be nice to be more like Elizabeth Bennet.For the portrayal Emma Thompson has the best acting for the character and to look like her would be great.

I am definitely like Elinor Dashwood but would not mind being a Elizabeth Bennett type at all. I think that Keira Knightley does a great job and would love her looks.

I believe that I would like to be like Catherine Morland but I am not like that at all, instead I am a Anne Elliot type. But I enjoyed seeing the portrayal by Emma Thompson and love her looks.

I am very much like Elinor Dashwood and could use more of Elizabeth Bennet for balance. I love the Greer Garson depiction as the acting was super and her looks are mysterious and perfect for the role.

My character is an Anne Elliot type but to be closer to Elizabeth Bennet would be a nice change. The acting done by Keira Knightley is the best ever and I love Emma Thompson’s looks a great deal.

I guess I tend to be most like Emma, not the good assuredness part but the blurting out things that probably should be left unsaid part. I’ve always wanted to be more like a Jane, quiet and reserved, but I think it’s a physical impossibility for me.

I’m a bit more like Emma, wanting to pair people off and happy to fling myself headlong into an adventure.

I think I’m probably a little like Lizzy – headstrong and prone to leaping to opinions. Wow, I sound horrible, so I’ll say that I can also suffer in impassioned silence like Emma.

I guess, since I’m a short Italian with dark hair, I’d like to be the opposite: Gwyneth P.

LOL, Megan! Love this post, and all the answers. They make me want to meet everyone–we could have a “come as your favorite Austen heroine” party. ðŸ™‚

One of those Jane Austen Centre quizzes told me I’m most like Marianne Dashwood, which is sometimes sadly true. I do stupidly impulsive things, and pitch drama-queen tantrums in my own house, but I’m also shy like Anne. And I want to look like Paltrow (or Knightley) and have Emma’s confidence!

I think I’m like Marianne in some ways, especially since I can get all dreamy and impractical at times. But, I don’t mind being that way! (I’m dreaming about Alan Rickman at the moment).

I loved Emma Thompson in Sense and Sensiblity. So, I wouldn’t mind looking like her, or Jennifer Ehle (who’d mind? ;-)).

Have to admit to being an odd combo of Marianne Dashwood and Anne Elliott.

As for looks, can I look like Milla Jovovich in The Fifth Element? See, it’s that Marianne streak…

Most like Marianne Dashwood. Sometimes good, sometimes bad.
Gwenyth Paltrow would be my choice to look like.

Although I have no need of the prize, I can’t resist the question. I suppose I would most like to be “Emma Woodhouse, handsome, clever, and rich, with a comfortable home and happy disposition.” Unfortunately, I think I’ve passed the Austen Heroine stage and have proceeded directly to Lady Catherine DeBourgh.

As for looks, I’ll pick Keira!

The difference for me is this: if Lizzy hadn’t won Darcy, she would have shrugged her shoulders and gotten on with life. I think Elinor would have mourned the loss of Edward for the rest of her days.

Hmm. As I’ve never had any real desire to be an Austen heroine, I can’t actually answer the question as asked. (I’m sure my wife is relieved!) But if I’m choosing which heroine I would like to, er, have, my heart still belongs to Jennifer Ehle’s Elizabeth. (Well, after Scully, anyway.)

As for which one I’m most like…if Elinor and Elizabeth were to have a child–which would require genetic engineering unavailable during the Regency, but never mind–and that child married Fanny Price, then their kid would be me.

Is that clear enough?

Being well past the age of any Austen heroine, my extremely fanciful fantasy Austen self-image is of Fiona Shaw’s luminous Mrs. Croft, happily insisting upon women’s estate as “reasonable creatures” in the Persuasion movie of about a decade ago.

My heads-on favorite movie Austen heroine, though, is Kate Beckinsale’s Emma. As flawed, self-deluding, and ultimately strong and smart as Emma needs to be.