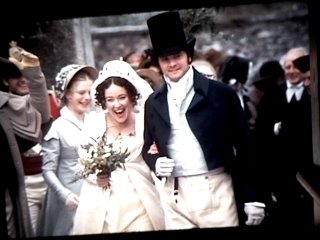 Congratulations to our winners, Maureen and Abookworm! See here for the contest winners announcement.

Sigh! As much as we love this happy ending, it is so difficult to say good-bye to Lizzie and Darcy (even if they might have a wish to be private for a little while. You know, to work on an heir)

Here are a few ways to linger in this lovely world Jane Austen and the BBC filmmakers created for us.

Pride & Prejudice Paradise This is a fun site with lots of things to explore, like “Missing Scenes” and (my favorite) “Did You Notice” which is something akin to P&P bloopers.

Here’s another P&P website – A Pride & Prejudice Photo Album This includes music that will be familiar to all who have seen P&P and photos from the companion book that was part of our prize.

And you just might want to peruse this Colin Firth biography It begins with this little suggestion:

“Try it as an experiment; walk into any pub or restaurant and shout out “Cab for Mr Darcy!” The result will always be the same. No man will express the slightest interest, but every woman’s eyes will brighten, a coy smile of delight will appear on her lips and her head will revolve as close to 360 degrees as is possible. Just in case it’s him – THE Mr Darcy.”

Don’t we all know this is true.

I am certain we Riskies will return to Colin Firth and Pride & Prejudice again, never fear.

Here’s a total but wonderful change of subject!

This past weekend I was at the New Jersey Romance Writers Conference with my fellow Riskies, Elena Greene and Janet Mullany. Both of these ladies were finalists for the Golden Leaf Award for Best Regency. Elena for Lady Dearing’s Masquerade and Janet for Dedication.
It was a tough battle, but Janet Mullaney won for Dedication. She has a very pretty lucite award to show for it, too. Contests have been good for the Riskies this year.

And now on to new obsessions…..

This week the Trailer for the movie “300” was shown on TV and in movie theaters. A version of it can be seen online. “300” is based on Frank Miller’s graphic novel of the same name, about the Spartans and the Battle of Thermopylae. Gerard Butler plays King Leonidas, so I’ve been, let’s say, interested in this movie. From how the trailer appears, “300” is going to be an amazing visual experience, and I am not just talking about the–um–costumes. The movie will be released in March 2007.

Hey. I just realized that March 2007 will be the month my next Mills & Boon/Harlequin Historical will be released. Remember Rose, the singer, from A Reputable Rake? Innocence & Impropriety tells her story.

I also have a Christmas novella, “A Twelfth Night Tale” in Mistletoe Kisses, Harlequin’s Regency Christmas anthology coming in Nov 2006. You’ll hear more of that soon.

Here is my little preview for you. 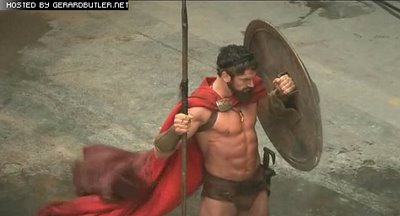 From P&P and Colin Firth to 300 and Gerard Butler, another fave subject of mine. (Points to picture on right, which I reversed so GB would face inwards *g*) Great trailer! Graphic novels don’t interest me at all, but Gerry and leather jock straps do. LOL! So I will be dragging the dh to see 300 on the big screen in March.

Me, too, Manuelita! My husband never could see the appeal of Phantom of the Opera, and Beowulf & Grendel bored him, but I’m sure he’ll love 300 (but maybe not as much as I will!)
I think he did like Pride & Prejudice, the movie, but he’d never admit it.

An extra congrats from me! 🙂 I don’t believe I caught you there, but I did catch and get books from Elena and Janet! 🙂 Definitely did clean up there quite nicely with the books I got! 🙂 Now I won’t be so nervous next time around if I can make it to another signing in my lifetime. LOL 🙂

300 for me isn’t my type, but certainly have, ah, seen a lot about it. LOL 🙂 I never caught this comic, but I did get the League of Extraordinary gentlemen ones. . . Alan Quatermain definitely does not look like Sean Connery in the books. LOL I’m not a fan of some of his other movies, but I’m definitely a huge GB as the Phantom nut! (pointing to my pic on the right) 🙂

But yeah, while pondering Colin Firth and his lovely Mr. Darcy, yeah, there is always another hottie we can ponder for a while, while allowing him to get a bit of rest. I mean, he has a busy week last week! 🙂 Just not here at home, I watched the Little Mermaid. LOL 🙂

Alas, still trying to figure out why we watched it in sophomore year Religion class. Heck, maybe all that stuff about the religious overtones was just a cover to spend a week on it. 😉

Thanks for the yummylicious photo of Gerard Butler. You’ll me first in line on opening night at our local theater.

Hi, Lois,
I am sorry I missed you. I came down to the signing at the end. I didn’t sign because I didn’t have a recent book (This is at the New Jersey Romance Writers conference). Janet and Elena told me about meeting you. Too bad I missed you. We could have sighed over The Phantom together!
Keira, if we’re at the same theatre, I’ll fight you for first place in line. I’m sure there will be more to say about this movie as time goes on.

Lois, it was great meeting you! I hope I wasn’t too incoherent–I’d stayed up late the night before talking to a friend I hadn’t seen since the last conference and by the booksigning my brain and eyes were fried! (Hope the autograph is halfway legible).

About being nervous, we authors often feel the same way on the other side of the signing table. Mary Jo Putney says we’re a bunch of introverts pretending to be extroverts, which sums it up pretty neatly.

But we do love to talk to nice readers like you!

My love of Gerard Butler is pretty strong, but not strong enough to get me to watch PHANTOM. I’ll have to see what 300 looks like before I make a decision (how can it be that I haven’t even heard of this film?).

Maybe I’ll go Netfilx BEOWULF . . . and THANK YOU FOR SMOKING (love me some Aaron Eckhart. If someone yelled “Cab for Mr. Eckhart!” my head would turn).

Why not watch Phantom, Kalen?

That was the movie that “started it all” for me. An amazing performance.

What struck me was how he conveyed so much emotion while singing, while wearing a mask. The emotion drew me and made me think I have to pack emotion like this into my books, especially for my heroes.

Congrats to Janet on her contest win! Your blog is indeed most impressive along those lines.

Haven’t read “300” (though I am familiar with the story of Thermopylae from, er, other sources). I have read some graphic novels over the years, including a few by Frank Miller. “The Dark Knight Returns” and “Year One” are both excellent; but I thought “Sin City” was gruesome to an excessive degree.

However, if you want to read about historical events in graphic form, I strongly recommend the “Cartoon History of the Universe” series by Larry Gonick. Very good, and very funny! And vol 1 includes his version of the Battle of Thermopylae…

Todd, how intriguing that you learned History from cartoons. Cartoon History of the Universe, huh? Wonder if it covers the Regency…

It hasn’t gotten up to the Regency (yet), as of the last volume I’ve read (volume 3). But since it starts with the Big Bang, you can argue that it’s made considerable progress. 🙂

I do read some books of history that aren’t cartoons. Heck, some of them don’t even have pictures!!