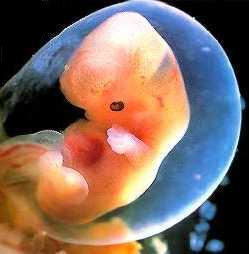 This week, I’m participating in a challenge with several writer friends. My goal is to finally finish the rough draft of mess-in-progress, which, incidentally, looks about as good right now as the embryo pictured here.

I know better than to worry about it. My first drafts are always incredibly clunky and they always clean up nicely by the fourth round of revisions or so.

But just because I know better doesn’t mean I don’t hate this part of the process. And I really shouldn’t. Anna DeStefano taught a workshop at the NJRW conference where she likened drafting a novel to dumpster-diving. You have to sift through a lot of garbage to find the pearls.

And it should be fun.

But I have a lot of trouble cutting loose and having fun. Maybe it’s the Catholic upbringing. Maybe it’s the lack of childhood pets! đź™‚ In any case, I’d like to get over this. I’m frankly tired of the fear and self loathing. Why should I feel guilty about writing bad first draft?

An idea I’m toying with right now is taking part in the National Novel Writing Month challenge. NaNoWriMo is, accordingly to the website, “a fun, seat-of-your-pants approach to novel writing. Participants begin writing November 1. The goal is to write a 175-page (50,000-word) novel by midnight, November 30.”

So if I do this, I would put the completed draft of m-i-p on the backburner and try to blast through another story that’s been niggling at me. Maybe the break from m-i-p will help me approach the rewrites with a fresh mindset. Maybe I’ll end up with a good chunk of a new story.

Is it my muse talking or the procrastination devil? My inner critic (who rather alarmingly speaks with the voice of my elementary school principal) says this is a creative way to procrastinate on the rewrites for m-i-p. She thinks I’m just going to waste time hanging out on the message boards at NaNoWriMo. But I wouldn’t do that. Would I?

My friends at Writer Unboxed are mulling similar questions. (Also, there’s a lovely essay on the Death of the Muse by the winner of their Alphasmart contest.)

Am I nuts to think about doing this? Readers, what do you think of writers churning out 50,000+ words in a month? Writers, any of you planning to take the challenge?

The good thing is apparently they will take scrambled manuscripts for the wordcount verification. So if I do this, no one has to read my drecky draft!

Elena, who prefers not to die of shame

14 Responses to Embryos and NaNoWriMo