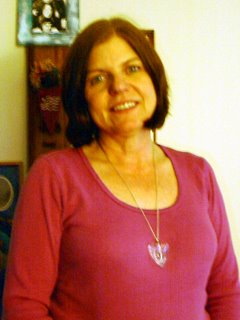 I started entering Romance Writers of America contests with my very first manuscript. Several of RWA’s chapters sponsor romance writing contests. I came in second in the very first contest I entered, Virginia Romance Writers Fool for Love contest, so I was hooked early. By the time 2002 came along, I was finaling in contests left and right, so often that my friend Kathy Caskie (How to Seduce a Duke, Sept 2006) dubbed me “The Contest Empress” and she gave me the sceptre to prove it.

That year my historicals came in 1st and 3rd in the Marlene Contest (my own Washington Romance Writers chapter) – the first place entry became my eHarlequin Daily Read (Jan 2006) The Diamond, and the 3rd place entry became The Improper Wife.

Above you see me with my Marlene Medallion, the prize for coming in first. 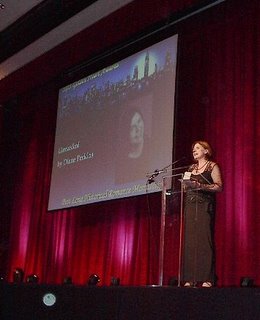 In 2003, I won RWA’s Golden Heart contest with the manuscript that became The Mysterious Miss M. There I am accepting the Golden Heart at the RWA conference in New York. 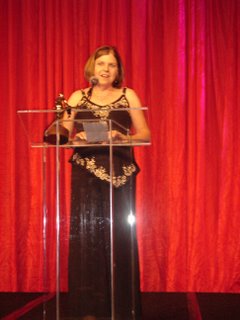 And as Amanda mentioned, this summer my A Reputable Rake won the 2006 RITA, RWA’s most prestigious award, for Best Regency Romance. Here I am accepting the RITA statue in Atlanta.

I made the decision to enter A Reputable Rake in the Regency category of the contest, first, because it fit the category. It was heavily grounded in the Regency time period, and had the right word count. I had always thought of this category as being meant for the TRADITIONAL Regency lines, but knowing those lines were ending, I thought I’d enter A Reputable Rake in that category, rather than short historical.

My decision turned out to be a very good one!

This year there will still be a Regency category for the RITA contest and I think any author whose book fits the guidelines ought to enter the book in the Regency category instead of Short Historical. I don’t have a Regency this year, so I can’t enter.

These are the guidelines for Best Regency Romance: Romantic historical novels with primary settings during the Regency period, typically 1795-1840. The word count for these novels is 40,000-85,000 words.
Judging guidelines: The category includes comedy of manners as well as darker stories, and the books may contain a variety of story elements, such as sexual content, paranormal elements, mystery, suspense, adventure, and non-traditional settings.

Consider this.
1.The Regency category usually has fewer numbers. Fewer numbers equals less
competition. ( but we have to get at least 25 entries!)
2. The competition for all our non-Regency historicals is decreased, because the Short Historical category is not filled with Regencies.
3. Regencies will be judged against other Regencies, which honors the special quality of our time period.
4. RWA will learn that the Regency set historical is still going strong with wonderful, talented authors writing great books.
5. Who knows whether there will be this category again after the contest is revamped. This may be the best chance to reach the finals!
6. I’ll get to stand up there and present some lucky author a RITA!! I already have a dress to wear.(I bought two for this year’s Award ceremony, just in case.)

So, what do you think? Do you think the Regency period deserves a contest category all its own?

The Regencies are not a dying breed. Maybe the trads are not in vogue now, but longer historical romance fiction set in the Georgian/Regency/Extended-Regency period is just as popular as ever. I was stunned to read that RWA is considering deleting it from its RITA contest offerings. I had hoped that RWA would follow reader interest trends rather than market trends.

From An Avid Reader of All Things Regency

Well, I don’t want to start a rumor, because RWA (through its members) has not made any decision on changing the RITA contest. There is a committee who will be working on it this year. I did volunteer for the committee, but there must have been bunches of others because I didn’t get selected.

I think it is POSSIBLE that the Regency category will be eliminated. In the Golden Heart, it has been very difficult to get enough entries to run the category, and the RITA Regency category is usually smaller than other categories (hence fewer finalists)

So I just want to make sure that those who will be proposing changes to the contests give Historical writers enough of a chance to make the finals. (See my comment to Amanda’s post of 10/21)

Rumors tend to persist, though, and I didn’t mean to start one!

I too hope RWA sees Regency Historical as strong. It is such a mainstay of the Historical Romance Market. Even the Traditional Regencies will persist, although maybe from smaller publishers. Wait and see. A couple years from now some major publisher will “invent” a traditional Regency line and it will be considered innovative! (my opinion…)

I think this is a good idea, Diane. I’ve often thought it was unfair that contemporary books have several categories and historicals only 2! It very much limits the number of books that can be recognized (and win, since the L/SH Historical finalist lists tend to be so huge!)

Diane, first of all, CONGRATULATIONS!!! Fantastic achievement doing so well in the Marlene, as well as your long list of other wins. And I wish I’d had classy friends like Kathy Caskie when I was an RWA contest junkie. Mine just called me cruel names like contest S*** (substitute synonym for ‘lightskirt’!). Sob! Well, not really. I always think it’s sad when a category is cancelled from the Rita/Golden Heart. It’s like the genre loses some of its richness.

Hi, Anna!
The Marlene was a tough nut to crack. I tried for years!
The contests for unpublished romance writers kept me motivated over the years when I was trying so hard to be published. Reaching the finals, winning (of course) but even just getting a good score or a good comment kept me believing I would finally sell a book.
To win the Golden Heart and then the RITA in only my second year of eligiblity was totally THRILLING.

Diane, I actually encourage anyone who asks me for writing advice to enter the competitions. Through my long years of being unpublished (and I bet they were longer than yours – not that size matters!), they kept me going too. This can be a very discouraging business and those judges really helped me so much. I’m grateful to every one of them, even the ones who didn’t like my stuff, as they helped me develop a tougher skin which I definitely needed! And I hope you heard me giving you a great big cheer among the thousands at the awards ceremony in Atlanta. Congratulations again!!!!

Hmmmmmmmmm, I wish the definition was for the whole Regency crisis (which begins in 1788 when my book is set!). 1795 seems so arbitrary to me. My publisher calls my setting “Regency”. Do you think that makes a difference?

Oh, too bad, Kalen! I am hoping that the Contest Committee will come up with answers to make things less arbitrary. Certainly for your book, “Georgian/Regency/Victorian” as a category would have worked. But I suppose the lines would be fuzzy at either end of that continuum, too.

Anna,
My journey to publication took 9 years….
Your point about contests helping to develop a thick skin is an excellent one! I never thought of that before, but in my contest experience, it was certainly true that I learned not to take to heart everything a contest judge said. Judging is subjective, no matter how you try to avoid it and it is just one person’s opinion.

Lately the lines have been blurring a bit between short and long historicals anyway.

I could see advantages to dividing the historical category as you mention, or even into European historicals and American. Of course, then someone would set one in Asia (which would be cool) and so there should be an “other” in there somewhere.

I sympathize with those organizing these contests, because it’s hard to balance out all the different considerations.