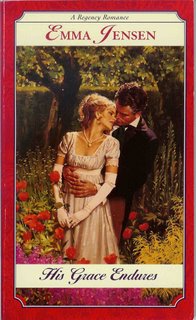 So, what are your favorite Regency Rita winners? (Except for Diane’s book, of course. We all like that best. It says so in our contracts.)

To refresh your memory, here are a list of the Regency Rita winners over the years: 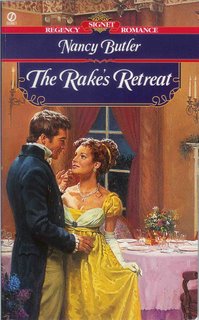 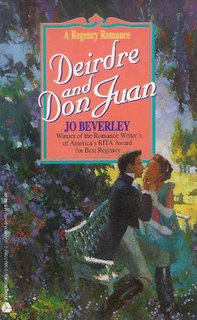 Have you read any of these? Which did you particularly like? Are there books by some of these authors that you like better than the ones which actually won the Rita?

Ooh, I hate it to admit this, but I have too. . . I only have one from that whole list. 🙁 I have The Passionate Endeavour. I gotta get around more. LOL 🙂

I loved The Rake and the Reformer and enjoy reading everything by Mary Jo Putney. Barbara Metzger and Emma Jensen are also my favorites. Jo Beverley is someone whom I haven’t read yet (I know, I know, I’m rather behind the times here), but who is on my TBR list. And Diane? I’d read anything she writes.

BTW, I loved the cover of His Grace Endures. I wish they made more covers like that one.

A Reputable Rake by Diane Gaston and A Passionate Endeavor by Sophia Nash are in my TBR pile . . .

I’ve read Mrs. Drew Plays Her Hand by Carla Kelly, An Unwilling Bride by Jo Beverley, and The Rake and the Reformer by Mary Jo Putney.

Loved all three of those.

And, Keira, I didn’t even use my whip on you! Nor did I pay you gobs of money. Thank you so much for that terrific endorsement of my work.

Kalen, I’m proud to be on your TBR pile!

The Rake and the Reformer was the first traditional Regency I read, and even that was about five years after it was released. I came late to the trad Regency but for several years it was my favorite type of book. I used to haunt my used book store and buy lots of old ones.

I loved The Rake and the Reformer, loved this version better than Mary Jo’s re-release, The Rake.

I also loved Jessica Benson’s Much Obliged. Hers was such a fresh voice. I loved it.

I am super thrilled to be in the company of these names. Look how many best selling authors started in Regency!

Keira, I agree about the cover of “His Grace Endures”! Fawcett had some really lovely covers. It was really too bad when they quit Regencies — not just because of their covers, but because they’d done some of the best Regencies around.

I haven’t read all of this list, but I’ve read some — and what I’ve read, I’ve almost always liked a lot. Sometimes, though, I prefer other books by the Rita authors!

For example — I think Carla Kelly’s “Mrs Drew Plays Her Hand” was wonderful, but I think I slightly prefer “Libby’s London Merchant.” And though I adore Barbara Metzger’s “A Debt to Delia,” my very favorite Metzgers would be “An Early Engagement” and “Minor Indiscretions.”

And though I love all the Jo Beverleys that won, my favorite of her books might be “The Stanforth Secrets”!

Must admit, I haven’t read that many of them–clearly I need to start raiding the shelves again! But Mrs. Drew Plays Her Hand by Carla Kelly is one of my favorite Regencies ever. I love Barbara Metzger’s work, and I liked A Debt to Delia, but it’s not my favorite of hers.

I am ashamed to admit that I have not yet read A Reputable Rake. Sorry, Diane! But I’ll get to it. And I want to read the sequels, too: The Lascivious Leaf-Blower and A Passionate Pitchfork.

Still, in another way it’s nice to know that there are plenty of good books waiting to be read!

Well, THE RAKE AND THE REFORMER is probably my favorite traditional Regency so that would make it my favorite RITA winner as well!

LOVE’S REWARD was the book that got me hooked on Jean Ross Ewing aka Julia Ross.

Diane’s book is A Reputable Rake, not about a disreputable one.

There are several books on here I enjoy! And, after Diane’s “official favorite,” I really do love “Mrs. Drew…”, “The Sandalwood Princess” (my favorite trad of Loretta Chase’s), and “Emily and the Dark Angel”

Well, Todd, are you not the funny one. A “nut” if ever I saw one.
Thanks to my friend Julie, some of the promotion I did for A REPUTABLE RAKE included giving away miniature garden rakes, suitable for house plants and dish gardens.
Each year at Washington Romance Writers Spring Retreat, we donate raffle baskets. Mine (with Julie and Helen and Virginia, my WRW friends and critique group)had the theme, A Reputable Rake and we stuffed a cloth garden leaf bag full of quirky and useful garden tools.
Know who won it? Nora Roberts!
Diane (on to writing The Lascivious Leaf-Blower and A Passionate Pitchfork)

I was looking at the comments and I saw a mention of Much Obliged. . . I missed a second one I have and I loved it too! Well, I’m feeling a little bit better now, now that I have two from the list. . . Still have to get out more, though. 😉

Get out more? Or do you mean, stay in more, reading? 🙂

My problem is I always want to read more books — and see more movies — and watch more TV — and write a whole lot more — and exercise — etc etc. I need nine lives!

Hmm. That’s the sort of thing people write when they think you are very much NOT the funny one. Sorry! My intentions were good!

BTW, great idea for a baby book: The Chivalrous Shovel and the Spectacular Spade. (Get it? A spade is like a baby shovel…oh, never mind.)