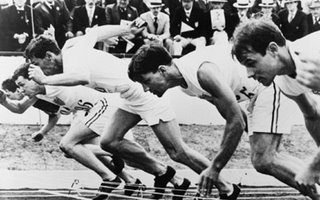 …the smell of the crowd.

Or, why I love and hate contests.

I published as a result of a contest, when Dedication won the Beau Monde’s Royal Ascot and the final round judge asked me for a full. In fact Dedication has been a contest cow for much of its existence–it won the Best Regency category of the NJRW’s Golden Leaf contest a couple of weeks ago, to my delight. So contests have been good to me.

But I’ve never let them become too important in my life–I was smart enough as an unpubbed to realize that contests were their own thing. Here are my hard-earned nuggets of wisdom as a former unpubbed contest slut:

All that said, I really urge any unpubbed writers to enter the Golden Heart. Once a finalist, always a finalist–you get on and off editors’ and agents’ desks fast (a mixed blessing) and you’ll make some good friends–Diane is one of my many 2003 GH finalist friends, aka The Wet Noodle Posse. That’s one way to crank up publisher interest in trads–particularly if you’re subverting the subgenre and going for the unexpected. Show them there’s life in the beast still–otherwise we may as well try to save unicorns.

Enter my contest all this month at roadtoromance.ca
DEDICATION~Winner, 2006 Golden Leaf Contest (Regency)

Janet,
I endorse every single one of your points about contests!

One thing about them. If you final enough times (or even once) it can become addictive. As an unpublished writer, it is very easy to spend way too much money on contests. Or to spend all your time polishing a one chapter contest entry and never getting around to finishing the book. Try to save your money and time for the important ones – judged by an editor you would like to court, or maximum visibility like the Golden Heart.

I haven’t been entering local chapter contests since I got my agent. Before that, I entered ~12 contests, finaled in two, and won one. Since I definitely got widely divergent feedback, I will choose to believe I have a strong and distinctive voice!

I did, however, pay my entry fee for the GH, and I’ll be mailing my entry on Halloween, for luck. I’m in Long Historical, though, since the manuscript I’m entering is a good 15K words too long for the Regency category.

Susan, It’s great to see you here and may your GH entry get the right panel of judges!

Susan,
If you have a good agent, then that is half the battle!
Entering the GH is still a good idea and I’m so glad you are doing it. I sold entirely because of the Golden Heart contest, a manuscript editor after editor, agent after agent said would never sell.
I wish you luck!

Thanks, Elena and Diane! We’ll see what happens. I’m trying not to get my hopes too high, because I entered the same ms last year and didn’t come close to finaling. But I know on the day the calls go out I’ll be staring at the phone thinking, “It’s done well in other contests, so with the right judges…”

Though what would REALLY be wonderful is if one of the editors who has it now decides to buy it in the next few weeks! Nothing would make me happier than having to call the National office and tell them to pull my entry because I’m not qualified anymore.