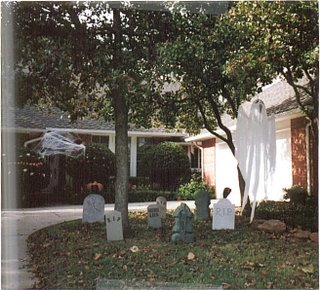 Tuesday is Halloween! This is by far my favorite holiday–there are no presents to buy, no relatives to argue with, just candy and costumes and spooky things. What could be better? (As you can see from the photo, which is a picture of my parents’ house decorated for the holiday, Halloween has long been a big deal in the McCabe family). It made me curious–what was Halloween like in Regency times?

A few factoids I found while scanning the Internet: Halloween has its roots in the Celtic festival of Samhain, celebrated November 1, halfway between the Autumn and Winter solstices. This was a time of year for endings–harvests brought in, firewood laid on for winter. And, as the old was being “stitched” to the new, it was thought that the veil between this world and the next was very thin, and spirits, both good and eeeeevil, could roam among us. One of their traditions at this time seems familiar to us today–houses were lit by rustic lanterns known as “neeps,” carved from turnips and rutabagas and beets (pumpkins came from the New World in the 17th century). Flickering lights were set out in hopes of welcoming homes the souls of loved ones and chasing away unwelcome bad spirits.

When the Romans conquered Britain in the year 43 AD, they brought with them their own religion, but liked incorporating holidays already in place (not ones to shy away from a party, those Romans!). They added a celebration to their goddess Pomona, which leads to our bobbing for apples and eating candy apples. Of course, then the Romans in turn were replaced by the Christian Church, who went on to change the holiday yet again, trying to replace it with festivals of Christian meaning. All Saints’ Day, a feast honoring all the saints who don’t have their very own feast days, was November 1, with a vigil the night before. All Souls’ Day was placed in November 2, a day for remembering lost loved ones still in purgatory. The night of the vigil, the 31st, was known as the “Hallowed Evening,” shotened eventually to Halloween.

In 1786, Robert Burns’ poem Halloween showed that even by Georgian times the holiday was going strong. The poem talks about the “tricks” of the day, as well as time-honored superstitions like eating an apple in front of a mirror in order to see your beloved (apples again!). Even though there wasn’t really a Halloween as we know it in the Regency, there was a hige fascination with the Gothic, the weird, the spooky, with books like The Mysteries of Udolpho (and Northanger Abbey!), Frankenstein (1816), and, on these shores, The Legend of Sleepy Hollow (1820). (I have a friend who pesters me every Halloween to watch the Johnny Depp movie with him, but I refuse, having been far too frightened by a viewing of The Shining a few years ago to ever, EVER, watch another scary movie!).

There are also a few Regency romances out there with Halloween settings–some that come to mind are Sandra Heath’s Halloween Magic and The Magic Jack O’Lantern, Mona Gedney’s Lady Hilary’s Halloween (and Anne Barbour’s book of the same name), and Teresa DesJardien’s Haunted Hearts. I even did a couple of books that, while not set specifically at Halloween, feature ghosts and masquerade balls (A Loving Spirit and One Touch of Magic).

What are some of your own favorite Halloween traditions and books? And what is your costume this year? (I’m going to be a pirate!). Happy Halloween!

Sadly, when we lived in the UK we discovered that Halloween is a much bigger deal in the US than in Britain. I attribute it to the fact that, in the UK, Guy Fawkes Night is only a few days later, and even free candy can’t compete with the pleasures of blowing things up and setting them on fire. (At least, not for boys; perhaps it’s different for girls.)

In the neighborhood where I grew up, Halloween had a tendency to become a bit, er, rowdy. It was rather reminiscent of those WWII movies where the small, gallant band of allies is parachuted in behind enemy lines, and must achieve their objective (i.e., candy) without being discovered and destroyed by the SS (in our case, roving bands of hoodlums with eggs, tomatoes and shaving cream). Fun, yes; but a little, how should I say, vigorous. And messy.

My favorite halloween was when I dressed up in my father’s fatigues and tucked my hair up in his WWII Army helmet. Nobody knew if I was a boy or a girl. That was so cool.
Caroline Lamb had nothing on me!

My fave Halloween movie is A NIGHTMARE BEFORE CHRISTMAS. Love it.

Also like to watch Charlie Brown and poor Linus… 🙂

This Halloween, I’m going as a Frazzled Mom (I’m still finishing up the costumes). But uh oh, that’s what I went as last year! 🙂

Actually, I love Halloween and so do my kids. Chocolate and the chance to dress up–what’s not to love?

Happy All Hallow’s Eve From the Witch! I was always a witch when growing up, if not Death. LOL!