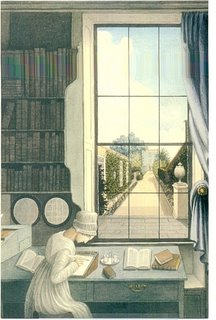 Well, after a great Halloween where I got to run around dressed as a pirate and eat far too many miniature Kit Kat bars (extra hours on the treadmill now, ugh!), I thought it’s time to Get Serious. I’ve been reading a great book called The Things that Matter: What Seven Classic Novels Have to Say About the Stages of Life by Edward Mendelson (a professor of English and comparative literature at Columbia). It’s not a super-long book, only about 240 pages, but full of fascinating ideas.

For the record, the 7 books are Mary Shelley’s Frankenstein, Emily Bronte’s Wuthering Heights, Charlotte Bronte’s Jane Eyre, George Eliot’s Middlemarch, and three by Virginia Woolfe–Mrs. Dalloway, To The Lighthouse, Between the Acts. I’m not going to go over all of them–that would make this post waaaay too long! I just want to touch on a few points he makes about Wuthering Heights and Jane Eyre that I found interesting, and also think apply well to our modern romance genre.

I love both these books, in totally different ways. As Mendelson points out, Emily and Charlotte Bronte grew up in the same family, the same environment, had almost identical educations, and yet “everything that Wuthering Heights says about childhood, growth, and adulthood is contradicted by Jane Eyre.” I read these books first when I was very young (about 9 or 10), and even I could discern something of this difference. I adored Jane Eye, and when I got to the end I just started it all over again! I didn’t love or understand Wuthering Heights–I was too young for it then. It was only later, when I re-read it and could see the complex narrative structure and the layers of the even more complex characterization, that I understood what a masterpiece it was. I still prefer Jane Eyre in some ways, but Wuthering Heights is also a favorite.

Emily Bronte was one of the great visionaries of the Romantic era (and a deeply, fascinatingly weird person!). She followed her own inner belief system built on nature and unity that is so very strong in Wuthering Heights. Heathcliff and Catherine are passionately in love, but it’s not the passion of mere sexual desire–in fact, they show no interest in the other’s sex lives at all. What they seek is Unity, to literally BE each other. Mendelson states that Wuthering Heights is about that Unity; Jane Eye is about Equality. Mendelson writes, “Equality, in contrast (to unity), is a difficult but plausible goal, with profound emotional and ethical meaning in both the private world and the public one.”

I think most of our modern romance novels share this goal and theme of Equality. The hero and heroine face challenges (much as Jane and Rochester did) that in the end put them on an equal footing as they begin their married lives, even if he’s the duke and she’s the vicar’s bluestocking daughter. Perhaps only in some paranormals is there more of that Wuthering Heights-ish theme of Unity. of true soulmates. It’s a fascinating idea.

My question (or questions) to you are: Which do you prefer–Jane Eyre or Wuthering Heights? Do you agree with theses concepts of Unity vs. Equality? Can you think of any romances where these would apply (I’d love to hear more about this!)? Now, I’m off to re-read some Bronte…

I;m not sure I agree with the premise of Unity vs Equality, for these two novels. However, they are two of my favorite novels.

Wuthering Heights is the only novel I reread each year.

I am so wedded to the happy ending

I loved, and love, both books, although I have to say I like Jane Eyre more now.

I wrote a senior thesis on the Psychoanalytic Interpretation of Wuthering Heights, and boy, was there a lot to psychoanalyze. I thought the second half of the book was way weaker than the first. I liked the tempestuous teenager-y gothic feel of both heroines, but I think Jane Eyre stands to the test of time better.

Um, I haven’t read either. . . well, technically some year in high school we did do Wuthering Heights, but like everyone else, I watched the movie. (Sorry!!) Maybe one of these days I’ll fit them in — reading is a lot more enjoyable if you don’t have to do it, and you don’t have 7 other classes to worry about at the same time. 🙂

I’m afraid I haven’t read Wuthering Heights since eighth grade, so I can’t intelligently comment on it. 🙂

I did love Jane Eyre, though, at the same age — and more recently. I do see that the equality thing was a major theme — Jane has lovely long speeches about it. 🙂

Wuthering Heights is definitely one of my favorites. But I”ve never finished Jane Eyre. I enjoy various adaptations of Jane Eyre, so I’m not sure what the problem there is. Just not fully dedicated to the cause, perhaps?

I read Wuthering Heights with a great teacher, Junior year in High School. He was very into dark, moody, creepy stuff. Read Heart of Darkness, Wuthering Heights, Don Juan (Byron), Coleridge, Return of the Native, Turn of the Screw, and Death in Venice for that course. As a test review on Wuthering Heights, we actually held a mini-sceance for Heathcliffe’s ghost. Ooo, shivers.

But I think somehow I’m reliving the experince of reading Wuthering Heights with Mr. Peffer in my Junior year when I reread it now, rather than experiencing it on its own terms.

Oh, I wish I had had a teacher that let us have a seance for Heathcliff! That would have been an English class worth attending. 🙂

I think WH does, in some sense, have a hapy ending, since Catherine II gets to marry and enjoy Heathcliff’s money after he’s dead and off to find unity with Catherine I (though that really feels tacked on, compared to Catherine I’s story. Mendelson says it’s a “sugarplum” Emily Bronte gave her readers, to reward them for sticking with the story, LOL)

Hmmmmmmmmmmm, hadn’t ever thought about it this way. I guess I’m more of a Equality girl. I love JE, but WH I only read once and that was enough for me (I spent the whole book wanting to smack them!).

I find that as I get older I have less patience with stupidity or timidity that results in unhappiness. Take Brokeback Mountain for example. Beautiful film that ticked me off. I don’t really want to spend hours with a tragic couple that won’t reach for what they want (and then the stronger of the two, the one who at least attempts to reach for it gets killed). Great. Thanks a lot. I’d much rather have watched a film about two gay cowboys who figure their crap out and flee to Napa to buy a ranch together.

Amanda, one did not miss Mr. Peffer’s class. Ever. He was such a ham.

For Heart of Darkeness’ test prep he came into class about five minutes after the bell had rung, dressed all in black. He handed out lists of questions and gave us a few minutes to choose some.

We were very excited–the teacher was telling us what the questions for the test werwe going to be! And he was going to give us anwers!

But when we each asked him a question, he would answer only in quotes from the book. He had memorized the entire thing. For the rest of the class he spoke only in passages from HoD.

It was hideously confusing. I remember being quite annoyed with him.

Made an impression though.

I’d much rather have watched a film about two gay cowboys who figure their crap out and flee to Napa to buy a ranch together.

But if they flee to Napa to buy a ranch, where’s the tragedy??? Other than the housing prices, of course…