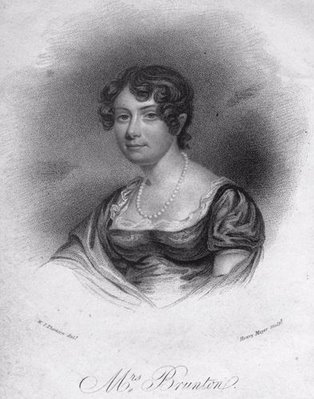 Last year I read Discipline by Mary Brunton (1778-1818). Mary was a Scottish novelist, a contemporary of Jane Austen, whose life, like Austen’s, was cut short by her early death–in childbirth for Brunton. She left us just 3 books, one Emmeline, unfinished.

Self Control, her first published novel was popular and mentioned in Austen’s letters, albeit with less than admiration.

I read Discipline because someone somewhere said that it had a good description of a Regency era ball. It did. The London part of the story was very interesting. The characters had a great deal more freedom than we ever give our heroines. The book’s plot wandered, but there was a lot going on in it. It tells the story of a wealthy but impetuous young woman whose folly and happenstance cause her to descend into poverty and despair, until she reforms her ways and vows to live a disciplined and moral life.

In some ways the book is difficult to slog through. In today’s fiction-world it would be in for some extreme tightening, but Brunton’s voice is an authentic voice of the past, and, to me, it felt like a peek into the real Regency world. One of the things I liked was that Brunton’s characters misbehaved in a grand way. She did not treat their scandals with the delicacy that Jane Austen achieved, but plopped the scandals on the page, front and center. I can just see a Regency teenage girl sneaking her mother’s copy of Discipline and relishing it, like we relished those first romance novels pilfered from our own mothers’ bookshelves.

Here is a very nice piece about Mary Brunton. http://www.chawton.org/biography.php?AuthorID=49

And here is a link to what Jane Austen said of Brunton’s Self Control, complete with links to the complete text of Discipline, Self-Control and Emmeline, her unfinished manuscript.
http://labrocca.com/marybrunton/

Has anyone read Mary Brunton?
What other novels popular in our Regency time period do you recommend, besides Austen, that is?
What romance novel did you sneak from your mother’s bookshelf?

I very much enjoyed Fanny Burney when I read her a long, long time ago; it’s interesting to see how the men behave in her novels compared to Austen’s heroines.

And if I found a book with a title like DISCIPLINE on anyone’s bookshelf, you know I’d sneak it away…

I’ll second Burney. And I love Fielding. Adore him.

I found Burney’s “Evelina” great fun, but I haven’t read any of her later novels — which I seem to recall were supposed to be less fun, and more moralistic. (Has anyone read them? Is that the case?)

I love reading plays from the period — or, rather, plays that were performed during the period, which includes plays that go a ways back.

I found Anne Radcliffe very difficult to plow through, I must confess.

“Frankenstein” is really great, though!

I have a friend who has been telling me to read Susan Ferrier’s “Marriage” for years, so I presume it’s good!

Diane, I can only address your third question, since I haven’t read Mary Brunton or other writers of Jane Austen’s time.

My mother likes to watch romantic movies, but has never read a romance novel, believing that if one must read, it must be high-brow literature.

Clearly, I didn’t buy into that philisophy. I borrowed plenty of Regencies and other novels from friends and lending libraries. Mills & Boon were very popular when I was growning up, particularly the prolific Barbara Cartland. The reading pleasure was no doubt heightened by being forced to read these illicit novels sneakily.

The books I sneaked were Frank Yerby. My mother thought they were low-brow but still read them. I actually have very old copies now.

Lots of good Romantics to read. All of Shelley and his circle. Fanny Burney, It was the age of the Gothic, which Jane Austen mocked in her Northanger Abbey, a story I love.

I favorite romances are just Regencies, always have been.

Keira and Janie, I love hearing that your favorite books are romances – Regency romances! My favorite comfort read.
I never heard of Yerby, Janie, but he certainly had a lot of books. (I looked it up on Amazon)
And I suppose I ought to add Burney to my reading list. I do have a copy of Frankenstein on my pile, too!

I haven’t read too much from the period aside from Jane Austen (though I’ve read some 18th century novels and plays). So no sneaking off with Mary Brunton, I’m afraid!

Of course, everywhere I go I carry a stack of six or seven books, which makes sneaking a bit difficult anyway. 🙂 As far as sneaking books goes, I did have a revelation as an adolescent (when else?) when I discovered that some novels had–er–naughty bits. And that one could read them right out in public and no one would suspect!

Of course, my new ebook reader is easily concealable, and can hold twenty books or so without getting any heavier! (Yes, I love my new toy.) So maybe it’s time to start slipping in some Brunton…and Burney…and Fielding…

Love the recent posts, the Bronte and the Star Trek ones –and this one..

My mom didn’t read romances, although I wish she had, since I’d have started reading them MUCH EARLIER than the ripe non-old age of 44! Poor Mom really did not READ anything. She was too busy raising 6 kids in the era of wringer washers, clotheslines, NON-permanent press, no microwaves, etc. etc.

I adore JANE EYRE. Read it as a teen and didn’t realize it was actually a romance, but I adored it. Still do. Fell totally in love w/both Jane and Mr. Rochester. Cool that you got to read the Burney book and got a closer look at the Regency era!!

Cannot wait for your next book!
Must run..
MARY

Todd, which ebook device is your new toy? I’m curious about them. I think they would be perfect for textbooks as well as novels.

It’s a Palm Z22. It’s about $100 and has 32 megabytes of memory; it’s about the size of a deck of cards, and weighs three ounces. The main downside is the small screen, only 150 by 150 pixels. For the most part it doesn’t bother me–it’s a bit like reading down a newspaper column–but for books with illustrations or formatting it could be awkward. I’ve mostly been downloading books for free from Project Gutenberg and converting them for ereader.

On the downside, it comes with a built-in game of solitaire which is weirdly addictive!

Growing up I was a HUGE fan of Judy Blume. My mom bought her book Wifey, which was geared toward adults. I couldn’t wait to get my hands on this book, and was told NO WAY after mom read it.

I was probably about 14 when I did sneak it. Whoa.