There are writers out there who claim that if everyone followed their processes (often involving detailed pre-plotting and single drafts), we would all write better books more quickly. Personally, I think it’s arrogant to assume that a process that works for one writer is obviously going to work for another.

Conventional wisdom holds that a new writer should try different things and then once she discovers what works for her, to stick with that process. I agree with that in spirit, but I’d like to go a step further. One should also be open to changing one’s process as one grows as a writer and especially if one hits blockages.

Some very fine authors (Jo Beverley and Julia Ross come to mind) do not do detailed pre-plotting. I think their results justify their methods! I don’t do detailed pre-plotting either. I’ve tried in the past, but I don’t get a good sense of my characters and where they’re going until I’ve put them through situations that force them to reveal themselves.

I also know of some writers who produce beautiful first drafts, polishing as they go. (Julia Ross is one). But for me, to come up with characters, plot, setting and the right words to describe it all in one go would be like riding a bicycle and juggling simultaneously. My own stories develop in layers, improving with each successive draft.

The writing process I have followed for most of my books:

This process has morphed a bit. As I started to make the transition from writing traditional Regencies to longer historicals, I found that I was having more and more trouble with the early drafts. I’d convinced myself this was a huge leap rather than a natural extension of what I’d already been doing. My muse fled and writing became a painful chore.

Several changes that have helped: 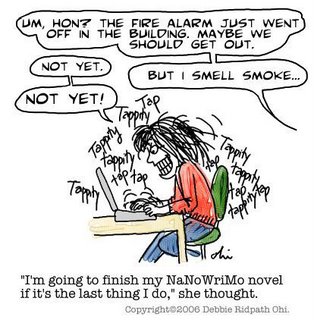 As to writing schedule, I strive for discipline. With two young children, I don’t have much evening or weekend time to write, which means I can’t afford to leave things to a big deadline push. I need to chip away steadily. So I write at least a couple of hours every morning (my mind works best then) and then try for a couple more in the afternoon, barring errands, sick children or household disasters.

I realize now that people asked about books on the art and craft of writing, but that could fill a whole new post, so if it’s OK, I’ll save that for next week.

I hope this was interesting and/or useful!

P.S. The cartoon is by Debbie Ridpath Ohi at www.inkygirl.com.

Thank you so much fo sharing this! I am finding it fascinating to see how the writers that I enjoy reading do their writing. I am relieved to hear you say that you do your writing through multiple drafts. I was almost despondent when I first wrote my first draft and realized how full of holes, one-dimensional characters, etc. it was. I swear I have that Nora Roberts quote branded in to my brain! 😀 It helps me keep going even when I know what I am writing is awful.

Nora is a strong proponent for the premise that there are many “right” ways to write. Whatever works for you is the “right” way to do it.

I do believe, though, that no matter what your style, it is important for new writers to FINISH A BOOK. Don’t worry if it is a masterpiece or not, or even if it is the best you can do. You will learn so much if you make yourself bring a story to its finish.

“Personally, I think it’s arrogant to assume that a process that works for one writer is obviously going to work for another.”

Amen! And I wish someone had told me this when I was just starting to write seriously, instead of making me feel like I was doing it all wrong for not filling in GMC charts, doing extensive outlining, writing character bios, etc.

I’m still learning what works for me, I think, since I’m only on my third manuscript. So far I’ve learned that I can’t do all that outlining and pre-writing, but I’m also not a true pantser–I have to let a story simmer on my mind’s back burner for six months to a year so I can get a sense of the characters, the rough shape of the plot, etc. I’ve also learned that I have to write straight through, in order. For my first manuscript, I wrote all the scenes that came to me most strongly, then went back and connected them. It took me two years, it was 150,000 words long, and it was a great big sloppy plotless mess.

What I still haven’t figured out how to do without a lot of help and prompting is big-picture level editing. I’m fine at tightening my prose, deleting unnecessary, repetitive scenes, etc. But my agent had me rewrite a big chunk of the midsection of the novel she’s shopping because the tone didn’t match well with what came before or after, and then had me rewrite the ending THREE TIMES before she felt it was fully believable and reflective of the changes the characters had undergone in the first 350 pages. And she was totally right, but I never would’ve seen it on my own.

For future manuscripts, I want to see and correct those problems on my own, but I’m not sure how to give myself the big picture eye I need.

Mina,
Many authors do very clunky first drafts. As Diane says, you learn a lot from finishing (and it feels wonderful, too). Also, congrats on reaching 50,000 on NaNo! Woohoo!!!! 🙂

Susan,
I think the big picture analysis is the hardest. The only way I’ve found to do it is to set the manuscript aside for a while (at least a month) and then give it a quick, straight through reading with fresh eyes.

I don’t always have time for that, however. When I don’t my critique partners are helpful. We are a very small group so it’s feasible for us to read entire manuscripts. Regular critique groups are often good at the scene level but usually can’t do this sort of work. And too many opinions could be deadly!

But like you, I wish I could catch these things myself. I would like to get to a schedule where I have the time to step back from manuscripts a bit before revising, but I’m not sure if I can manage it!

I totally agree that what works for one person will not work for another. But also too, I think our processes change through time. I’m sure the way I threw papers together in high school and the first years of college will not work now, or at least will not work in all classes or subjects. When I was in high school, the term papers were scary, but now, I could do those, no problem. But now, I’m sure I won’t just be putting together lab reports for those science classes, so I’ll get scared all over again. LOL But it’ll take adjustment and learning what works now instead of what I did once upon a time. 🙂

Lois, who did also seem to work as a procrastinator as well at times 🙂

I’m going to chime and say I, too, agree that every single writer has to figure out what works for them! I think each of us has a different method. It’s not always easy to work out our own best way, it takes practice and (in my case) lots of frustration! But the satisfaction of writing The End is enormous. 🙂

Hmm. From my observations, the process that works for some writers (who will remain nameless) involves a lot of moaning, complaining, games of gin rummy, tea, games of solitaire, more tea, death threats, and brief periods of monomaniacal focus. But this may be a distorted perception.

Mina, I, too, have been relieved to read that so many writers believe that your first draft can have holes, can have placeholders, can be drek, but that’s still OK, because you can always come back and fix it. Thank you all for this message.

Ah, Diane. Finish the Book is the hardest thing, especially the last 20 percent, because new ideas are floating around for better and cooler stories than the one I’m tired and the one that doesn’t seem to be going anywhere. That’s where Amanda’s idea notebook would be good for me.

Todd, you’re amazingly brave! I’m not sure whether it is you or Bertie who take the most risks.

Conventional wisdom holds that a new writer should try different things and then once she discovers what works for her, to stick with that process

Thanks, Elena. All of your Riskies have given so many ideas for me to try out to find what will work best for me and become my process.

Despite having two small children, you’re so prolific. That must take a lot of discipline. Kudos to you!