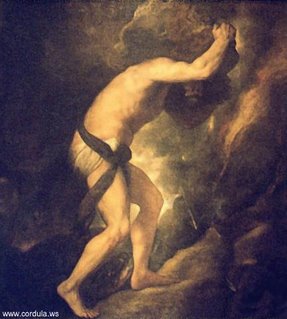 That guy? In the picture up there? That’s Sisyphus, who Zeus sentenced to roll a rock up a hill for eternity. That’s what writing feels like.

My process is still evolving; I know eventually I will get that damn rock up there without so much sweat and swearing, but right now, it’s a chore. 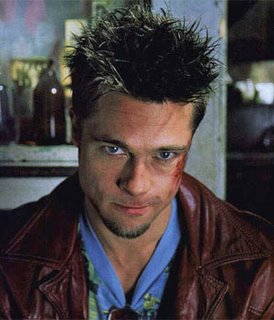 First, I get an idea of characters, usually in one of the scenes from the book. For the book I’m working on now, Lessons In Love, I thought of two people who would teach each other, but with a little twist: In my story, the heroine is teaching the hero to be more manly (by teaching him fencing), and the hero is teaching the heroine to be more womanly (by teaching her dancing). I thought it would be fun to figure out why my h/h wouldn’t have already had these skills. Next, I get an idea for what they look like. I can’t seem to write about them unless I have a famous person in mind for their general appearance. For this book, my hero looks like Brad Pitt from Fight Club and Jason Lewis of Sex And The City. My heroine, oddly enough, looks like Marina Sirtis who played Troi on Star Trek: The Next Generation. No, I don’t know why either. 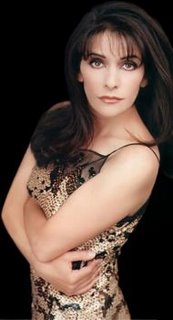 Then I envision the plot unfolding like a laundry line with scenes hanging off them like your socks pinned up by clothespins. I move from clothespin to clothespin, hoping to connect the dots in a cohesive manner. More often than not, my clothespins don’t make much sense, so I have to trim them.

The most recent way I’ve tried to connect my plot (my biggest weakness, since I have a propensity to throw things in along the way, and forget to pick them up again, resulting in a hodge-podge of action) is to write the scenes out on index cards, then lay them out on a table and make sure each scene HAS to be there. The jury’s still out on that method, but it felt right, so I think that might work. We’ll see.

I write, editing as I go, making sure each scene feels right to me before I move on. I come up with new clothespins along the way, which usually gets me into trouble. I hit the important points of conflict, black moment, blacker moment, and final resolution. Then I shred the whole thing when various people point out it doesn’t make sense (see Lessons In Love, above. Sigh). I love editing; it’s so much easier to move words around and tweak things than it is to write a fresh page. Plus I have no sympathy to my prose if it doesn’t belong in the story. I like yanking it, it always makes the story flow more smoothly.

Like most of us here, I don’t think there’s one “right” way to write; I can’t do anything without knowing certain things about the story, but I can start writing without a clue of what’s going to happen. I write with a candle burning, usually, although sometimes I don’t have it. I always have loads of tea around, and when I am in the middle of writing, one part of my brain is always working on the story, even if I am nowhere near the computer.

Thanks for joining us on our “Writer’s Journey” this week. Amanda finishes up tomorrow, and we’re pleased you’re along for the ride.

I like that index card idea! I tend to forget I’ve already covered a point in an earlier scene and then it all gets repetitive. Maybe I’ll give this a try…

LOL on the Sisyphus metaphor! I know exactly what you mean. Then there are those glorious times when I am in the zone and it all comes together. It’s what we all work for, I think. I just hope all that rock-rolling helps get us there!

Course, it requires a special trip to the stationary mega-mart to get more, and then you can spend hours wandering through the aisles looking at marbled post-it notes, new pens, and wondering whether a burgudy colored organizer would be more likely to keep my organized than a black one.

Suisan, I could so relate to your journey in a stationery store. I thought I was in an adult Toys R Us when I walked into my first Staples. I could spend hours looking at different colors and sizes of index cards.

But I’d never use them. It just doesn’t work for me. I can’t really think about my book as a series of scenes that might be able to be moved around or that need to be connected. I think it is because I’m very linear. I write from beginning to end and hopefully catch the repetitions in my revisions.

I do all my note taking on the computer. I have all these little files, like Plot summary, End Plot (how I’m going to get to the end)

Megan, I start with photos of characters, too. And I keep all my names and character facts in a file called “Names”

But I would NEVER have Brad Pitt as a hero! He’s just too pretty for me, and, frankly, I’ve never understood his appeal.

Everybody congratulate me because I turned in my Mills & Boon / Harlequin Historical #5 yesterday, so now I’m almost back to normal. I think I caught the repetitions in this book. I sure hope so. I have a Gerard Butler DVD to watch (The Miracle Match – very limited theatre release) and tomorrow I’m going to an all day lecture at the Smithsonian: The Regency World of Jane Austen. I can’t wait! Those are my rewards for finishing.
Diane

I’ve noticed that though some of us edit while drafting, and some don’t, at least three of us specifically mentioned drinking a lot of tea while writing! Hmm… Guess that’s the magic secret! đź™‚

BTW, I’ve never yet found a plotting guide/system/whatever that works with my brain. (I have an eccentric brain, I guess.) That includes hero’s journey, GMC, anything involving turning points and black moments… I think I have to do all that intuitively, even when I thoroughly plot out ahead of time.

Just one of those brain things, I guess…

Reading your description of the writing process made me feel so tired that I had to lie down for a few minutes afterwards. I don’t think I’d make a very good Sisyphus. đź™‚

Congrats on finishing your book, Diane!

I have so enjoyed reading about everyone’s writing process. I like the idea of having a set routine to get the mind prepared. The rock-rolling concept caught me by surprise, then I found myself agreeing. It does feel like that sometimes.

Congratulations, Diane! Have fun! I like the idea of having a reward for finishing, beyond the obvious one that the work is done.

Thanks, Cara, Todd, and Judy T!

What a great analogy of the laundry line with socks hanging off.

I really like the idea of the using index cards for all the scenes then rearranging them as needed into chapters.

Suisan & Diane: A trip to a stationary store is a must before, during, and at the end of a project, and every time in between.

Megan, do you usually edit on-screen or on paper? Are you able to edit the entire book on-screen? I’m such a low tech person that I have to kill trees and see it on paper before I can spot bigger errors or get a sense of the bigger picture.

Though, I also tend to be able to manage to edit sentences and paragraphs on the 4-line Alphasmart Neo screen as I’m typing.

Cara, I’ve noticed the prevelance of tea drinkers here, too. No Starbucks minions?

Living in Seattle with a coffee shop on every street corner and in between, the very air is permeated with the fragrance of coffee, so you cannot help but succumb.

Megan, thanks much for sharing your writing process.

I edit on-screen and on paper; for the index card stuff, I do that from a paper copy. I edit on-screen when i have a specific purpose to my editing, but free-form editing is best done on paper, for me at least.

And Keira, I love coffee, too. I’m very equal opportunity when it comes to my caffeine ingestion; tea just seems to sit better when I’m writing.

Put me down for another coffee fan. I like tea, too, especially if I have cold as I do now. (sniffle)

Thanks once again for the index card idea. I’m going to try that out with my next project.

Someone, I forget whom, had also suggested doing a collage of the book for a more visual picture. I’m going to try to do a minimal one, tying in the index scene cards to it.

Oops, Elena, our posts crossed. Glad to see that there are more and more coffee drinkers here, too.

Hope your sniffles go away soon. Being sick is just not fun in the winter months. Hope your kids are fine.