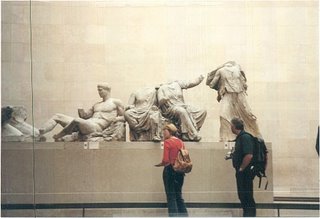 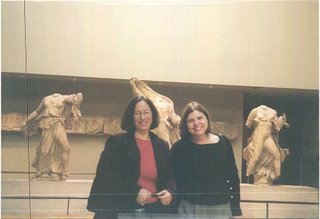 Like Megan, I’m just not sure what to post about today! In the month of December it’s like my brain takes off for a vacation (skiing in Taos, or something) while my body is forced to stay home and work and get ready for the holidays. I’ve also started working on book #2 for this new Harlequin contract (up to page 75!) and it’s preoccupying me quite a bit. So, I’ll just talk about it. Or rather, one small historical aspect of it.

The new story is Regency-set, and hopefully kicks off a new series called The Muses of Mayfair. You see, there’s this scholar and antiquarian who has a bunch of daughters, all named after the Muses. Book One (or WIP), The Alabaster Goddess, is the story of the eldest Muse, Calliope, a half-Greek earl, and the shenanigans surrounding a stolen ancient statue of the goddess Artemis. I just finished writing a scene where the characters go to view the Elgin Marbles (where the villain is introduced, the hero and heroine argue, and…But that’s for later!)

On the Splendors of the Regency tour Diane and I went on, we were lucky enough to have a free afternoon to tour the British Museum and see the Marbles for ourselves (that’s Diane and our friend Julie Halperson in one of the pics. I don’t know who the other people are–they just wouldn’t get out of the way for me to take the photo!).

My main source for the scene in my own story was a volume I picked up in the Museum shop, The Elgin Marbles by B.F. Cook (British Museum Press, 1997). It’s slim, less than 100 pages, but full of great illustrations and lots of info about the Parthenon, the sculptures, and how they came to be acquired by the British Museum. Long story made very short–around 1799 the Earl of Elgin (Thomas Bruce) was appointed Ambassador Extraordinary and Minister Plenipotentiary of His Britannic Majesty to the Sublime Porte of Selem III Sultan of Turkey. A group of artists and architects sort of tagged along to Athens (then a small, seedy town, where the grand Acropolis was being used a Turkish fortress) to work on documenting and, if possible, restoring the Parthenon. The condition of these treasures was not good; much had been damaged or destroyed in an explosion, or carried off to be used as building materials elsewhere. By 1802, the first of the sculptures, from the metope section or excavated from the ground, were on their way to England. On April 22, 1811, after many (mis)adventures, the last of them left Athens on the ship Hydra, accompanied by Lord Byron.

After residing in various locations, including Elgin’s home on Park Lane (in a shed!), the Duchess of Portland’s, the Duke of Richmond’s, and the Duke of Devonshire’s Burlington House, the sculptures were finally bought by the Nation and vested in the Trustees of the British Museum in 1816, for 35,000 pounds. (The earl, who was in dire financial straits by then, having lost his rich wife, was hoping for at least 70,000). The ‘Temporary Elgin Room’ (where my characters view them!) was opened in 1817 and remained in use for 14 years.

So that’s my “history lesson for the day”! đź™‚ What are some things you’ve seen on travels, or read about in books, that inspired you? Any favorite travels spots (I need to live vicariously since my brain is off skiing and I’m slaving away over the Hello Kitty notebooks!)?

p.s. Another good read is Susan Nagel’s Mistress of the Elgin Marbles: A Biography of Mary Nisbet, Countess of Elgin. It has been a while since I read it (it came out in 2005), but as I recall it dealt more with her scandalous divorce than the events surrounding the Marbles, but was a fascinating story.

19 Responses to Losing My Marbles