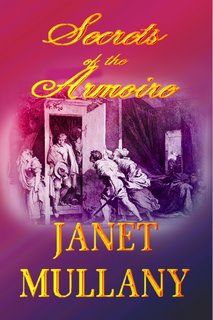 No, this isn’t the cover of my next book. It’s a splendid rendition by writer Delle Jacobs, wearing her designer hat, based on an etching by Fragonard called L’Armoire (the closet) after I’ve been tearing my hair out over a new title for my regency chicklit. Delle pointed out the interesting phenomenon of the hat held in place without benefit of hands.

The marketing department at Avon decided that The Chronicles of Miss Wellesley-Clegg with the Occasional Scribbles of Mr. Inigo Linsley was a bit of a mouthful and might confuse booksellers. Furthermore, it’s no longer a romance/regency chicklit. I have been promoted to the status of a historical writer, and it will be released as a HarperCollins historical–ironic, since I consider this the most romance-y thing I’ve written. And my editor invited–or summoned–me to come up with a new title.

My first round of titles, including the brilliant Running with Rakes (suggested by my agent), were rejected as sounding too much like a romance. I suggested Mr. Darcy’s Trousers, which frankly I think says it all about why we like the Regency period. Nope, there’s nothing about Darcy in the book otherwise. My next batch included the immortal Gentlemen in Tight Trousers. Other (rejected) attempts were: The Smallest Room, Tart Rejoinders, Tart and Sweet, Present Imperfections, Tea and Scandal, The Happiest Delineations, and One Polish’d Horde (the last three after an evening with the Oxford Book of Quotations).

My additional challenge here is that the title has to indicate the book is funny, since this line seem to be quite serious, although very nice-looking with fine art and pretty squiggly things. I have yet to suggest Not Another Austen Knock-Off, but I’m keeping it in reserve.

P.S. Here’s an excerpt from the book from my website, www.janetmullany.com. And check out my Christmas recipe for Cranberry Nut Tart, too, while you’re there.

Um, Janet, What about “Secrets of the Amoire” as a title??? It looks great on Delle’s bookcover.

I wonder what IS holding the hat in
the cover’s etching, if not hands…..

I also noticed that none of my title suggestions made the list, which proves that my skill at titles is extremely limited.

Diane, an embarrassingly large number of people have suggested titles, along with the ones I created, and none of them even made a B-list. I’m hoping inspiration will strike soon…
“Secrets” as far as I can tell, is a romance-y title word. (Like The Secret of the Sierra Madre, The Secret Garden…)
Janet

My titles were too romancey, I’m sure. You need something like The Girl with the Pearl Earring, or The Bookseller’s Daughter or something– but with comedy.

I usually have lots of title trauma, too. Without knowing much about the specific story, my first thought is something alliterative and Austenesque. It’d give a sense of the period and that it’s not a dark book. But I don’t know enough about h/h to come up with specifics.

IN I GO By Janet Mullany (ghostwritten by Yoda)

Did you have a section of this posted on-line? I seem to remember the characters and they’re truly, awesomely, funny.

If anything halfway decent pops into my brain, I’ll share.

My beloved enjoys making movies. However, there’s a noted lack of ability to create meaningful titles. The current working project is “Big Chair” but makes no sense to anyone. I think it’ll be called “Please Stand By” – but there’s serious title trauma around here.

How about “A Funny Thing Happened on the Way to the Club”….

I’ve just updated the original post to include a link to the excerpt on my site (glad you enjoyed it, Jane!).

And it’s Treasure of the Sierra Madre–what was I thinking?–or something very close. Still sounds like a romance title to me, tho.

I hate coming up with titles and always feel like mine are pretty boring. For yours I’d probably come up with something like “A Lady’s London Chronicle” (assuming, of course, that it’s set mostly in London) or maybe try something sort of old-school traditional Regencyish for that classy romantic comedy feel, but I really do suck at titles.

Skimming through my LibraryThing catalog, certain romance buzzwords leap off the virtual shelf–Forbidden, Bride, Devil, Mistress, etc. My instinct is to run away from anything with “Sweet” or “Savage” in the title, though it’d be fun to write a traditional Regency about a demure young thing and call it “Sweet Miss Savage.”

As for what makes a title work for me, heck if I know! I prefer non-generic titles to things like “Forbidden” that could apply to any number of books, but I can’t remember ever picking a book up specifically because of its title.

Oh, why not, Janet? Like the cover design, which is wrong century (18th) and wrong country (obviously French), it has nothing whatsoever to do with the story. Ought to be perfect for them.

Oh geez, I have no clue what makes a title work. LOL Once upon a time pre-high school and after when I wrote my silly fanfics, I rarely ever came up with a title because I never could. But you know what titles I like — James Bond Movie titles. Why you might be asking. . . and if not, I’ll tell you anyway. ðŸ˜‰ It’s always a phrase that is repeated at least once in the movie. Well, if not always, mostly. I always got a kick our of it. LOL ðŸ™‚

BUt I haven’t a clue what makes a title romancey. Well, there’s always the words love, seduction. . . yeah, love is probably the biggie. LOL ðŸ™‚

What about Miss Wellesley’s Diary?