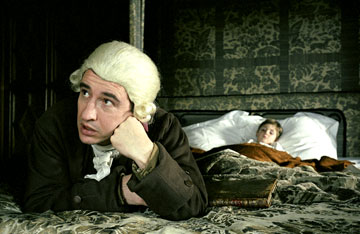 This week, we’re talking about our favorites of 2006. Of course, that raises the question… Our favorite whats? For the sake of argument, or, rather, lack thereof, I will limit it to favorite books/movies/plays that I can at least pretend have something to do with the Regency or Regency Romance.

1. I had great fun with Naomi Novik’s imaginative Regency dragon book, HIS MAJESTY’S DRAGON (known as TEMERAIRE in the UK). It was the Regency background we know,

crossed with Anne McCaffrey, with some Patrick O’Brian thrown in. Great fun!

2. I just loved Jennie Klassel’s THE LADY DOTH PROTEST. It’s a romantic romp set during the Middle Ages — no, I’d never heard of such a thing either! It’s broad and hilarious and bizarre, and I’d never read anything like it. And it’s link to the Regency is….that there once upon a time were a lot of Regency romps out there. (Yeah, I know, it’s a stretch.)

3. I really loved the science fiction novel SPIN by Robert Charles Wilson. Todd and I both voted for it to win the Hugo Award this year, and then it won, convincing us we were invincible. And the link to Regency Romance is…um…. Well, there’s a love story in it…

4. I loved the FIREBIRDS anthology of fantasy stories, and its follow-up, FIREBIRDS RISING. Fantastic authors. And the link to Regency romance is…um…well, I really liked it, and I like Regencies too. 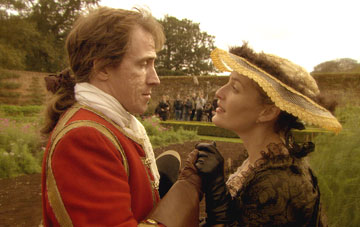 Okay, here’s something that has a real Regency link! TRISTRAM SHANDY. Bizarre and massive book. Massively bizarre movie, though not quite as random as the book. Very funny. Very weird. Has a childbirth scene in for Elena! Go rent it. (Released in Britain as “A Cock and Bull Story.”)

2. Other movies that I either really liked this year, or that I liked better than I expected, included: MUNICH, THROUGH A SCANNER DARKLY, THANK YOU FOR SMOKING, THE PRESTIGE, THE LAST KING OF SCOTLAND, THE QUEEN, MARIE ANTOINETTE, and THE FOUNTAIN. 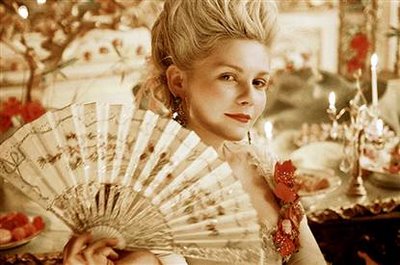 (And by now you’ve all seen through my ruse of pretending this have any link to the Regency, so I won’t keep on with it. Well, except I guess that MARIE ANTOINETTE does actually have some relation. Or maybe THE QUEEN.)

1. I saw the RSC put on all three of Shakespeare’s Henry VI plays in one day, at their cool new theatre in Stratford. That was really exciting, fascinating, and fun (believe it or not).

Well, those were my favorites, as I remember them! If you read/saw any of these, what did you think?

Cara
Cara King, author of MY LADY GAMESTER — which is also one of my favorite novels, albeit in a rather different manner

Ah, well, I haven’t seen or read any of them, and I haven’t even heard of most. LOL I gotta get out more. But I saw a play too, just Pride and Prejudice. 😉

You saw a play of Pride & Prejudice, Lois? Neat! Where was it? Was it good? What did they change?

I do think she is misrepresented a bit, though. She is often praised for saying “let them eat cake,” which is thought to be a generous offer to feed the French peasants cake until they grew as fat as Louie.

However, I have it on the best authority (mine) that the Queen was speaking Latin at the time, and was misunderstood. She did not actually say the peasants should eat cake (libum), but children (liberi). Hardly a kind statement. Though pretty much what I would expect of the French.

Of course, some scholars argue she said they should eat books (liberi). I find that hard to credit, though. I tried to eat a book, once. Not very easy, let me tell you.

HIS MAJESTY’S DRAGON is, hands down, my favorite book of 2006. I’ve been pushing it on everyone I know who’s at all interested in fantasy and/or historical adventure stories. Though I envy Naomi Novik’s ability to almost channel Patrick O’Brian. I tried and tried to write like him for months, only to at last admit I couldn’t any more write in a voice resembling his than I could make my alto singing voice into a first soprano!

Cara, I cannot compare notes except to say you are one of my favorite sources for TBR or TBS (To Be Seen) items!

Dear Bertram – Until now I had no idea that Marie-Antoinette had such an influence on Jonathan Swift (A Modest Proposal). Actually, is it possible they were really the same person? Has anyone ever seen them together at the same time? I’m guessing not… Hmmm…

Wow, I’ve seen or read almost everything that you listed, Cara! What are the odds against that?!!

Bertie, your insights are fascinating as always. But are you sure she wasn’t saying “Let them book a table at a good restaurant?” (Tabula liberarum in macdonaldus bonum, if I recall correctly…)

Rob, your speculation that Marie Antoinette and Jonathan Swift are one in the same is extremely persuasive! Using the same line of reasoning, I have just realized that I am Pope Benedict XVI, and also that I wrote all the plays of Shakespeare (and that my wife and I wrote his sonnets).

Cara, I also really enjoyed The Queen, Marie Antoinette, and Tristram Shandy (that “womb” scene is one of the funniest things I’ve seen in a long time!). And His Majesty’s Dragon was terrific! Can’t wait for the movie.

Todd – I would’ve guessed the two of you wrote the Robert Browning – Elizabeth Barrett Browning sonnets, but apparently you’ve seen them at a party.

It was this one: http://www.shakespearenj.org/season/pride.html It was great, funny. . . it was three hours, so obviously a lot wasn’t in it, but they did a rather good job with keeping with the book, having the important stuff, all the characters where there. . . it’s already been a while, so I can’t remember specifically what was changed or added or deleted, but I just remember thinking the above. Their Mr and Mrs. Bennet was way loonier (in a very good way though!!!! LOL) than the 1995P&P. Almost forgot, they did have a much better looking Wickham, but I knew him from the soaps Another World and Guiding LIght, so maybe I”m a bit biased. LOL 🙂

Oh, and Bernie, ah, I’ve never tried eggnog myself, but you might want to be careful on how much you have. . . you might really, really like the stuff, if I understand what the ingredients are correctly. 😉

Ooh, that production of P&P sounds nice, Lois! I saw an adaptation of Northanger Abbey once, in Greenwich, I think, and it was a lot of fun!

Bertie, dear… I suspect that too many centuries have passed since you last studied Latin. And why do you think Marie Antoinette would be speaking Latin, anyway? I agree with Lois — in future, you might want to be a bit more restrained with the eggnog. 🙂

Cara – It wasn’t seeing Todd and Robert Browning at the party together that threw me, it was how they were carrying on!

I want to assure you that Robert Browning and I are just good friends.