Last year around this time, I joined a book discussion group. I was getting stale reading only romance novels and historical reference books. I figured my life and my writing would both improve from reading outside the genre. So far, the experiment is going well. I found something to enjoy in each of the group’s selections and I’ve enjoyed the socializing, too.

If I thought that this year I’d read some literary novel that blew away all my favorite romance authors along with Georgette and Jane and the Brontes, or even came close to the reading pleasure they’ve given me, it didn’t happen. I think the other book group members were also somewhat disappointed in this year’s reads. So first I’ll describe some that came close but were NOT my favorite reads of 2007.

One was ATONEMENT, by Ian McEwan. Brilliantly written and the characterizations and dense but evocative (slow for some readers) prose appealed to the Anglophile in me. Still, parts seemed too self-consciously clever and I was disappointed to learn of the controversy regarding what certainly appear to be barely modified passages from the autobiography of Lucilla Andrews, an author of hospital romances.

Another beautifully written book was MY SISTER’S KEEPER, by Jodi Picoult. It deals with a difficult and heartwrenching topic and the writing is strong and eloquent, but I was disappointed in the ending. Not because I expected anything but a bittersweet one, but because it felt contrived, as if Picoult had burned out near the end and fell back on deus ex machina. Nevertheless I hope to read more of her books.

THE MERMAID CHAIR, by Sue Monk Kidd, author of THE SECRET LIFE OF BEES, was a bigger disappointment. Her writing is truly lovely but characterization and plotting fell short for me. It was also galling to read a B&N reviewer’s statement that it read like a cheap romance novel.

Anyway, my point, FWIW, is that pretty wordsmanship is not enough for me. (Neither is it the exclusive hallmark of literary fiction any more than cliches are necessary in romance.) To love a book, I have to love its bones too, regardless of genre.

Based on recommendations from friends whose taste is similar to mine, I expect I’ll love THE SECRET LIFE OF BEES and THE TIME TRAVELER’S WIFE, previous book group selections I have high on my TBR list. But I haven’t gotten to them yet, so my two favorite reads for 2007 are romances.

Having loved MISS WONDERFUL, I was eager to read Loretta Chase’s MR. IMPOSSIBLE and I wasn’t disappointed. It’s Loretta Chase at her witty, heartwarming best. The setting is different–Regency Egypt, and the characters are delightful and different. I love that she has been writing heroes who are younger sons–although I look forward to catching up on the story of the oldest brother in this series, LORD PERFECT.

My other favorite read of 2006 is THE PROPOSITION by Judith Ivory (aka Judy Cuevas). It’s her RITA-winning Victorian historical featuring a hero that’s a rat-catcher and the lady who undertakes, a la Professor Higgins, to transform him into a gentleman. It’s warm, funny, sexy, and in places just brilliant. I’m slowly trying to catch up on Ivory’s backlist while hoping for many more. 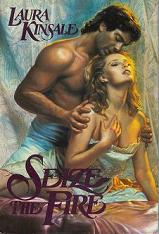 For 2007, I look forward to reading more book club selections and catching up on the books I mentioned before. But along with those, I’m also going to continue savoring the works of favorite romance authors.

For Christmas I received this hardcover copy of SEIZE THE FIRE, by Laura Kinsale. It’s definitive proof that bad covers happen to wonderful authors. It also goes a long way toward explaining why some members of my book discussion group would never pick up a romance. But based on how I feel about Kinsale’s other books, I’m pretty confident I’ll love what’s inside. 🙂

OK, without spoilers, has anyone read any of the books I mentioned and what did you think of them? What genres do you regularly read besides romance? What are you looking forward to reading in 2007?

I just reread Laura Kinsale’s Seize the Fire and well, it was truly romantic, and I wish she would write more like this. Maybe the one she has sitting is like it.

My favorite read all year was Elizabeth Gaskell’s North and South. Very romantic.

Now here I did read a couple, Mr. Impossible and Lord Perfect. I don’t remember them very well, but I must have liked Mr. Impossible (sure like the cover! LOL) because I have a 5 next to it. LOL 🙂

I have to admit I really loved Atonement, but I’ve also been disappointed by book club reads in the past! And I enjoyed Mr. Impossible–have Lord Perfect on my TBR pile. 🙂

I’ve never belonged to a book club that read modern “literary” fiction… Only book clubs that did the classics, and my current one, in which we read great/famous/influential science fiction and fantasy. 🙂

Besides romance, the genres I read most of are children’s fiction (particularly fantasy), young adult novels, and science fiction.

I mean to start on Jasper Fforde next year, and read some Loretta Chase books I missed, and some Julia Quinn, and lots of fantasy and SF, and maybe some Dickens, and… Okay, better stop there.

Janie, I love “Wives and Daughters” by Mrs. Gaskell (her last book), which to me is the ultimate romance. I tried to re-read “North and South” but found myself wincing at the dialogue.
Janet

I read the three Loretta Chase books and tracked down some others I had missed. I really don’t have time to reread them, with all the other books on my TBR list and my own writing to do. . . but your comments make me wonder if I should go back.

I just finished reading all four of the Essex sisters books from Eloisa James, since her fourth one was out. Wonderful way to spend my travel time for the holidays.

I’m back from my travels. Hope everyone had a good holiday. I look forward to catching up on all the posts I’ve missed.

I read all kinds of stuff–a lot of nonfiction, as well as novels in various genres. That makes it hard to choose favorite books of the year, since it’s so hard to compare things! 🙂 I’m afraid I haven’t read any of the books Elena mentioned–I read very few authors of historical romance, though I suppose that will change as I continue to read the Riskies and their recommendations…

Top books for me in 2006, broken down by category:

Classics: Tristram Shandy, Dracula, lots of Shakespeare; Sci-Fi: Babel-17, Spin, Learning the World, A Fire Upon the Deep; Mystery: Death in the Stocks, Memory in Death; Fantasy: American Gods, His Majesty’s Dragon, Swordspoint; Modern “literary” fiction: The Curious Incident of the Dog in the Night-Time; Romance: Miss Whittier Makes a List, Don’t Look Down, Mistletoe Kisses; Childrens/YA: The King in the Window, How to be Popular.

History: The Cartoon History of the Universe III, Curry, The Victorian Internet; Science: Programming the Universe, Infinity and the Mind, Traveling at the Speed of Thought; Other nonfiction: The Book on the Bookshelf, Paris to the Moon, The Economy of Cities.

Not a very short list, I’m afraid! But they’re all good. 🙂

I haven’t read any of those. The books I got for Kissmoose were Grave Sight and Grave Surprise by Charlaine Harris, and I have to say I’ve liked everything I’ve read by her so far. I tend to read a lot of Sci-Fi Fantasy and mystery as well as the occasional romance, and I like things that combine them all. Lately I’ve been reading Japanese Manga too. I used to read a lot of graphic novels. I’m rather ecclectic.

Lately I’ve been reading Japanese Manga too. I used to read a lot of graphic novels. I’m rather ecclectic.

Me, too! (Or perhaps you noticed.) I have recently thought that I should check out some Manga, since I’ve never read any, but truthfully I have no idea where to start. Do you have any recommendations of a first book (or series) to read?

Cowboy Bebop is very popular and Ashira and Oh My Goddess, but I tend twoard Chibi Vampire (chibi means Cute) and the manga tale using Death from the Sandman comics by Neil Gaiman. And I like a lot of the unconventional romances. Yes, I think that’s the most polite way of phrasing that without putting anyone to the blush.

Funny, I just popped over here from Word Wenches where I had to tell Loretta Chase how much I adored ALL her books! Miss Wonderful and Mr. Impossible were the firsts I read of hers, but you can bet I read everything I could get my hands on!