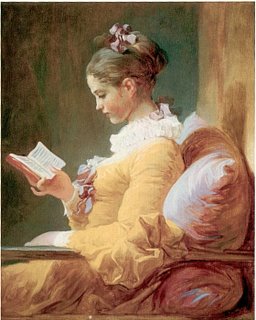 Hope you all had a great holiday! I got my very own chocolate fountain (just what I need after all the holiday eating I’ve been doing!), plus several Barnes and Noble giftcards, which are already spent, and two new Little Thinker dolls from the Unemployed Philosophers Guild catalog to add to my collection (I now have Shakespeare and Elizabeth I to add to Jane Austen, Monet, Emily Dickinson, Frida Kahlo, and Van Gogh–who comes complete with removable ear). I also got DVDs and the Marie Antoinette soundtrack, and that doesn’t count sundry little Hello Kitty items. A great holiday all around!

When it comes to “end of the year reading” lists, I always wish I had kept a log of all the books read. I forget, and probably leave out some stories I really enjoyed. But here are a few that have stuck in my mind:

The Flamenco Academy by Sarah Bird: What I loved about this one was the vivid descriptions of Albuquerque and northern New Mexico (where I grew up), plus the evocation of flamenco culture and artistry. The story centers around Cyndi Rae, a shy girl from a, shall we say, unusual family, her intense high school friendship with fame-seeking Didi, and the man who comes between them–intense, sexy, but (of course) highly unreliable flamenco guitarist Tomas. The story is puntucated by the story of Tomas’s aunt Dona Carlotta during the Spanish Civil War (this part really could have been its own book). Obsession, romance, finding oneself–it’s all there. (One quibble I had–I’ve been taking flamenco lessons for a couple of years, and started ballet when I was 3. I don’t believe that a girl could take an intro to flamenco class her freshman year of college and become a professional before she graduates. No matter how obsessed).

Special Topics in Calamity Physics by Marisha Pessl: I tend to be a bit wary of highly hyped books. Sometimes they are great; oftren they are disappointing. But this was one of the great hyped ones. Our heroine Blue Van Meer has spent her young life traveling around the country with her professor father, and lands at the St. Gallway School for her senior year. There she gets involved with a mysterious, charismatic teacher and a group of odd students called The Bluebloods. Coming of age and suspense built around an imaginary syllabus of a Great Works of Literature class. Big, rambling, wonderfully geeky. The New York Times said it is “flashily erudite”, and that seems like a good description to me.

The Bronte Project: A Novel of Passion, Desire, and Good PR by Jennifer Vandever: Serious scholar Sarah Frost is looking for lost letters of Charlotte Bronte; glamorous, flamboyant Claire Vigee easily upstages her with her “Diana Studies” (as in Princess). This books hilariously skewers academic pretension and the silliness of pop culture, while introducing us to a plethora of eccentric secondary characters–two New Yorkers who pretend to live in the 19th century, a Hollywood producer who falls for Sarah and also wants to change Charlotte’s story into the latest “feel good” romantic comedy.

Queen of Fashion: What Marie Antoinette Wore to the Revolution by Caroline Weber: I’ve been doing a lot of reading about 18th century France for research lately, and this was one of my favorites. History as fashion, yay! Each phase of Marie Antoinette’s life is detailed by what she chose to wear and how her use of stunning, extreme, unique costumes to project an image of power and influence backfired. Beautiful descriptions.

Invisible Lives by Anjali Banerjee: a sort of “Bollywood chick lit.” Lakshmi helps run her mother’s Seattle sari shop, and has the magical gift of seeing others’ secret dreams and fulfilling them through the right sari. But what are her own dreams–an arranged marriage to the “perfect” man, or American Nick? A fun read, and more fashion!