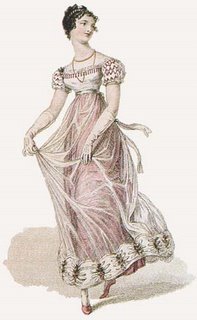 Yesterday, I dropped off the revised manuscript of my purported Regency-set historical, Lessons In Love, to my agent. She asked me how I felt about the revision, and I said I liked it better now, but I wasn’t totally in love with the story. In discussing the challenges I’m facing with LIL, she mentioned that a lot of former traditional Regency authors have queried her with their Regency-set historicals but are having problems making their stories as big as a single-title Regency-set historical should be.

What do you think? Do you like BIG books? Are there single-title authors who use “small” plots but execute them in a big style? Are you tired of spies, or do you want more? And did you promise your mother you would only marry for love?

I’m not going to speak to writing Regencies directly, but I have come to the conclusion that more modern people tend to over-make or over-function things. The more things we get with multi-function and convenience, etc., the less we’re able to keep our eye on whatever the real goal is.

So, there are probably a lot of Regency-set historicals that would be better as simple romances. Just the same as there are cellphones that would probably have a lot better reception if it weren’t for the camera some fool stuffed in the middle of it.

A sense of this might be what your agent was getting from the various writers, Megan. These folks want to write bigger, because they think that it’s better. And it isn’t, necessarily.

My answer is usually “just because you can, doesn’t mean you should”.

I’ll now pack up my soapbox and wander off into the background again.

Well, I’ll be perfectly honest and say I’ve never read a trad, at least knowingly. *g* I think I might have some in my TBR pile disguised as omnibuses. (Is that the correct plural form?)

Anyways, I prefer single title historicals. Is bigger better? Not when “bigger” means throwing in a bunch of mish-mash plots and characters just to add more pages to a book. My all time favorite romances are those that are character driven. There are no spies, no villains, no big misunderstandings. Just two people trying to get to their HEA, but dealing with a lot of sexual tension (one of my fave things in a romance) to get there.

So I’m guessing that a traditional Regency author, like yourself, can make the change. Just maybe expand on the sexual tension. JMHO. I’m not a writer, so you can totally ignore everything I’ve said. LOL!

And there are always Mary Balogh’s books — she says she’s writing the same books she did when she write traditionals for Signet. (Albeit longer!)

To be honest, I think one can err by throwing in standard “big” Regency elements — I fear that’s why there are a few too many historicals with undercover spies in England, many of them seeming a bit too much like the next one…

Then again, it can be hard to carry off 100,000 words without serious external plot! Of course, traditionals often did have lots of external plot, too…

Okay, how’s that for a useless, mealy-mouthed answer! 🙂

I’m thinking it has more to do with pacing than anything else.

Sometimes a movie or a book feels longer because there’s all these loose ends (at the end) which have to be resolved. If you can keep a good pace going, then I don’t mind extra stuff.

But it FEELS like extra stuff which was just thrown in to add to the word count or running time when the pace slows around them.

I’m not sure that made sense whatsoever.

Chiming in late here (just saw I won Colleen’s book, thank you! thank you!) and have to say that I like a longer story that lets me know more about the characters and their relationship. Sometimes, often, really, all that other stuff gets in the way of the story. I’d rather see extra characters, perhaps family and friends, a supposed-friend-really enemy, then the spies and other external plots used in Regencies.

My love of Regencies, at least as I’ve come to know them, is the time period itself. Too many big ‘Regency’ books seem to take a few dresses, a few dances, and then just use a regular story line. The comedy of manners, the juxtaposition of what is right and wrong, that’s the beauty of any type of Regency, IMHO. Think of some of Georgette Heyer’s longer books — she stayed true to the period (and she did bring in the war, part of that era) without going away from the time period.

Not sure that’s any clearer than anyone else. Good luck, Megan, you can do it!

It’s hard for me to say. I don’t like the generic “bodice rippers”, but I like the comedy of manners, and I like the smouldering adventures. Beauvalet is a good smouldering adventure. Powder and Patch is more of a comedy of manners. But I like it when they stay true to the period best. Describing the same dress over and over that just may possibly hint of a period dress, the name of a dance, and the possiibility of a drive in the park are not enough to make it feel right, I think, but I can disregard that if the story feels good anyway.

My mom never insisted I marry for love or even discussed it with me. But she was very pleased when I announced plans to marry my roommate. Pleased the roommate too because my sweetie really *hated* being called my roommate.

Gee, I don’t know the answer to this, Megan. I think the book just has to have enough complexity, enough secondary characters, etc, enough story to get to that 100,000 words.

It was always heartening for me to hear Mary Balogh say she’s writing the same kind of books she always did, except longer.

BTW, Megan, you probably already know this, but in the December RWR there’s an article on writing a book with a bigger “feel”…

Soooooooooooo sick of spies. I can’t even tell you . . . all I have to do is see the word “spy” in the back blurb and the book goes back on the shelf.

Congrats on turning in the book! I know that’s been weighing on you for a while. 🙂

Jenna, who writes spies. Girl spies. My apologies to Kalen. 😉

I’m not tired of spies per say but I do have some difficulty with spy-dukes. I enjoyed the one in Mary Jo Putney’s PETALS IN THE STORM but in that case he was just going about his business being a duke and the spy thing was thrust upon him. It’s harder for me to see someone with all the really important responsibilities of dukedom “giving it all up” to become a spy.

And there are just too many of them.

A commoner spy, one based on some of the real ones–that would be cool. Maybe there are some of those out there and I just haven’t caught up.

No need to apoligize, Jenna. I’m actually a little intrigued by your girl spies. *GRIN*

Manuelita: I believe they are “Omnibi.”

As for spies, I love spies. I even love secret agents, who are mysteriously like spies, and yet never seem to actually spy on anyone. “Was it not, after all, La Rochefoucauld in his Maximes who had it that in Zurich in Spring in wartime a gentleman is hard put to find a vacant seat for the spurious spies peeping at police spies spying on spies eyeing counter-spies what a bloody country even the cheese has got holes in it!!“

I think Jenna’s lady spies are a cool twist on the idea, btw. Like Elena, I find it hard to believe a titled guy would throw his whole persona away (not to mention dumping the responsibilities inherent in the title) to go wander after Boney and his friends on the Continent.