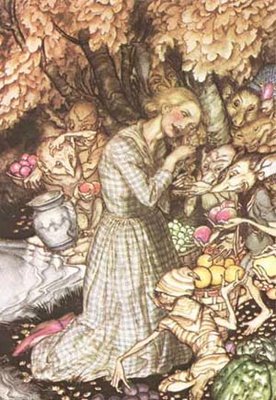 There’s big excitement about this entry on
Kristin Nelson’s blog where she claims editors are gagging for historicals.

She’s too discreet to say which editors, though, which is a pity.

Apart from the argument that historicals have never been dead/dying, this raises another point:

Who determines the market?

Is it the editors, who make the decisions about what they want to buy? The marketing department, who decide how the books should be packaged? Is there a special bucket, way up in the penthouse suite of every publisher, where an executive dips his hand in, pulls out a slip of paper, and solemnly announces (for instance) that eighteenth-century men in kilts are in?

Or is it the readers? Or the writers?

How can anyone write to the market when the high concept of 2007 may be the stale bagel of 2009 (which is probably when a book submitted now would be published)?

We’ve been talking here recently about cliched plots vs. tried and true story lines, and I think the truth is that a good writer can subvert and polish something that’s been done to death. But what are we missing?

What would you like to read and/or write? It’s time to roleplay the character of Ms. or Mr. Big NY Publishing House Executive. Is there a time period you feel is neglected? A type of character you don’t often see? A setting? You’re going to choose what we’ll be reading next…and it’s….

One thing I love, but don’t get enough of, is truly witty characters. The sort of Jane Austen/Oscar Wilde/Georgette Heyer/Joan Smith characters who just sit around and say very clever things.

I think much of fiction right now is very plot-driven, and high-concept driven. “Oh, look, this is a Regency with goblins, I haven’t read one of those before, sounds fun” instead of “Oh, look, this witty dialogue is actually witty, I’ll buy it.” đź™‚

And as for the story these witty characters are mixed up in? I don’t much care!

I wish I knew what I wanted to read. I want to read something fresh, but I don’t want it to stray too far from the tried-and-true.

I think writing has totally screwed up my reading habits, though, so no one should listen to me!

I’m sure I’ll always enjoy the Regency and well-executed versions of the tried-and-true Regency plots and characters, but if you made me god of publishing, there would be a lot more variety in historical romance. There would be Regencies set outside Britain–in India, in Australia, amid the Peninsular War, etc. Not everyone would have to be an aristocrat in my world. I’m not saying I want to read about squalor and dire poverty but there’s a wide range between the dukes and the chimney sweeps I’d like to read more about!

There would be American historicals other than Westerns–colonial/Revolutionary stories, 19th century stories east of the Mississippi, etc. I’d love to read a good historical set in San Francisco or Seattle, which despite the Pacific Ocean being right there aren’t really western in the fiction-setting sense. Oh, and Westerns wouldn’t be so heavily focused on cowboys and lawmen. I grew up on the Little House books, and one of the Sunfire YA historicals I read into tatters as a teen was set on the Oregon Trail. Why not frontier/pioneer romances for adults?

And I’m encouraged by the recent Roman historicals, but so far most of them have featured gladiators. Nothing wrong with that, but I’d like more variety there, too.

So. I want variety. And, of course, good writing, appealing characters, and historical accuracy.

I’d like to see a wider breadth of setting and time period, and I’d like to see a wider scope of character type (lordy am I sick of ingĂ©nue virgins). Iâ€™d love to see some stuff set in Feudal Japan, or Tang Dynasty China, or (like Susan) Victorian San Francisco!!! And Iâ€™d like to see a bit stricter historical accuracy. The Roman Empire romances intrigued me for a while, but the plots donâ€™t ring true, historically for me (most of the ones Iâ€™ve seen sound like the movie GLADIATOR was the sum total of the research done, and that movieâ€™s history stunk!).

I’m with Susan and Kalen on wanting more variety.

I have heard that editors say historicals outside the tried-and-true settings don’t sell. Why then are there so many readers who say they’d like more variety?

I think the readership is mixed on this and publishers are cautious. Jo Beverley has said she had to convince her publishers to allow her to do a Georgian but the success of her Malloren series has probably helped open doors to other authors to do the same.

I suspect that if a popular author wrote a truly stellar romance in a new setting or with some other unconventional element (and supposing her publisher supported her) that something similar might happen. The problem would be is that it might just become the new trend.

Well, this was never supposed to be an easy business!

Still good to hear that there may be an increase in demand for historicals.

I keep laughing that Georgian seems to be the new black. I’d read Jo Beverley’s and Julia Ross’s, and while listening to the workshops from Atlanta I learned that Elosia James is doing a new Georigian series (her Duchess in Love books). Boy do I hope to be riding a new trend!

Answering myself: I’d love to see books about the English civil war (guys with long hair and lace!); England in the first couple of decades of the 20c, when you had the suffragettes, the Bloomsbury group, and World War I; and 17c America. I’m, uh, into ready-made conflict.

Well, on a personal note I’m happy with what I read and I’m not really looking for other periods outside the variety I get. However, what I like isn’t what everyone else in the universe likes, so why not have variety and other periods?

The problem is I think, from my reader-peering-in-author-world seat it’s just like television and movies. To use an example, once upon a time there were the first reality shows on the networks. Soon enough, everyone had to have at least 10 reality shows on their networks. And most of those 10 were copies of everyone elses. Soon enough, people calmed down, pardon the pun, but there were shows that were survivors, while most no one even remembers. I think the same holds true for everything. It looks like the same in publishing — when someone tries something new, it gets popular and everyone has to copy it. But then people get sick of it, but it doesn’t die off, there will be some tried and true survivors and others will move on. And whatever had gotten pushed out to make way for the new stuff, people will want back again. It’s all an annoying cycle, I think — I just wish movie execs, tv execs, book execs (sorry, just wanted to keep going with the same phrase! LOL) would get the hint that yeah, when new ideas come out, sure we might want to see more, but don’t forget there are so many likes out there that not everyone likes one thing. Variety is a good thing. They’ll still make money, I guarantee! đź™‚

Hear, hear, for witty characters! Of course, in a sense that puts extraordinary demands on the writer…but for those who can do it, I wish they would! đź™‚

I do love the Regency and Georgian periods, so I don’t mind seeing more there. I’ve never read an ancient Roman romance (there is something oddly redundant about that expression), but I’ve read lots of other novels set during that period, which is a time I find fascinating.

But to join in the call for more variety–one thing I’d like to see is some romances set in the early 20th century. Edwardian, WWI, Roaring Twenties–there is room for elegance and wit, for pain and trauma, for liveliness and zest for life, and for combinations and permutaitons thereof. What’s not to like?

I want to read books which evoke the historical era which they are suppsed to be set in. I want wit, drama, passion, sensuality and to read Medievals, Elizabethans, Georgians, Tudors and books set in the 1920s as well as these eras seem to have been completely forgotten by publishers!

I’m sick of reading wallpaper historicals where the writer completely disregards the mores and norms of the time she is describing and instead has her characters speak as if they are living in the 21st century!

Diane Gaston, here, shoving Diane Perkins aside and using her space on blogger.

For those of you who are pining for variety in Historicals, take a look at Harlequin Historicals (my publisher!).
HH is committed to variety. This year they released Michelle Style’s Gladiator’s Honor. And more than once the editors have said they’d love to do a WWII book. HH is open to new time periods and settings. I think they are more willing than some other single title publishers to take chances. They certainly took a chance on my The Mysterious Miss M!

Lois, I just want to ditto everything you said about following the trends. And I even think Diane Perkins would agree with me.

Diane (the other one)

I agree, Diane. I make sure to buy M&B Historicals (as they are called where I’m from!) every month. I love the fact that they publish Regencies (which are historically accurate and which are not all the same or part of a long series!), Roman Historicals, Restoration, medievals, 1920s books and Westerns! I adore them and wish more publishers would take more chances.