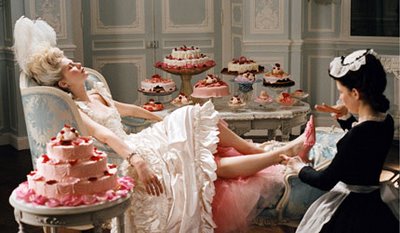 One of the advantages–I guess it’s an advantage–of having a twenty-something move back into the house (upon graduating from college, hooray! This is not a picture of her–the cakes wouldn’t last a minute in our house) is that you get to see a lot of tv you wouldn’t generally. And, yes, I’m talking about the American Idol auditions, which we have been following with horrified fascination. What makes those people think they can sing? What makes them so eager to expose themselves to humiliation and ridicule?

And what on earth does this have to do with the Regency? (And, incidentally, why is Marie Antoinette’s maid wearing a late Victorian uniform?) 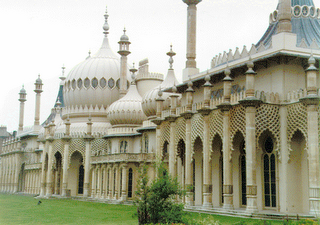 Well, I started to think about the Regency period as one of ostentatious display and a certain lack of shyness in self-revelation–Harriet Smith’s Memoirs, for instance; Lady Caroline Lamb–yes, I could see her auditioning and berating Simon Cowell for being sarcastic, and leaving in floods of tears. What, he didn’t like me? Me?

It was a period represented both by the vulgar exuberance of Prinny (seen at right being laced in for the day) and the uh, jewel in his crown, the Brighton Pavilion, as well as all that elegance and self-restraint and gorgeous classical design. 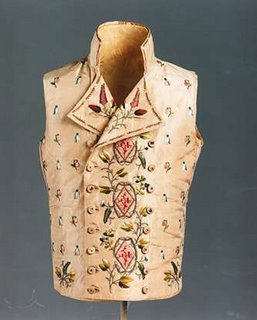 Beneath his severe, beautifully tailored coat, your hero might well be sporting a lavishly embroidered waistcoat–and he’d make sure everyone would catch a tantalizing glimpse.

That’s what I love about the period, the contradictions and the sense of change–it might all be about the tailoring and the classical line, but it was equally about decoration for decoration’s sake. My theory is that this all ties into the developing sense of domestic privacy that began in the eighteenth century. 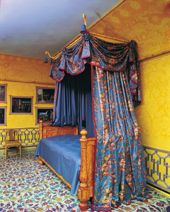 Houses were now designed so that family members could sequester themselves into private rooms–no longer was the typical house plan one where you had to go through everyone else’s room to get to the lord’s chamber, the seat of power in the house, where his bed was displayed as the best piece of furniture. Bedcurtains had always been to provide warmth and now they also provided that new luxury, privacy; chances are your servant would have his own sleeping quarters, and not a trundle bed in your bedchamber (a fairly new word in the English language).

I’d be interested to hear your take on the growth of privacy and ostentation vs. restraint, and also how you think your favorite Regency character, fictional or real, would do in his or her American Idol audition!

Is that really a Regency waistcoat? Neat! I don’t believe I’ve seen one that, um, flowery post-18th century.

I confess I watch American Idol, but I don’t watch the first half or so — the audition half. I don’t like watching the judges be cruel, nor do I like that fact that we’re supposed to laugh at real people whose dreams are being crushed.

(Though I do see that, after the first season, there’s good reason to think most of the terrible ones are fakes — either actors or regular people delighted to act like a fool if it means getting on TV…)

I’d love to see Heyer’s Duke of Avon audition for American Idol. I’m sure he’d have a lovely voice, and then make cutting, witty remarks about the judges — all while staying amazingly cool. 🙂

I’m so sorry that you’ve been subjected to American Idol. Okay, it’s not fair for me to belittle the show since I’ve never seen it. I don’t want to see it. I’m already sick of it from hearing everyone from radio announcers to my critique partners discuss every facet of the performers.
(And secretly, deep down, I’m convinced I can sing better than most of the contestants and I’d hate to have that certainty shattered.)
I was surprised to see the elaborate waistcoat. While the cut is tremendously different, the style is quite similar to some 18th C. waistcoats I had the pleasure of seeing during a workshop at Belair Mansion.

Thought I thought the buildings actually grew somewhat more ostentatious in detail, I had always believed the clothing took on an elegant simplicity as the 18th C. progressed into the 19th. I obviously haven’t studied it enough!
And I do tend to forget the onset of privacy as a concept. Henry VIII hired one of his most important courtiers to wipe his royal backside. Not much privacy there. And through the 18th C. important men and women received guests in their bedchambers and slept with children and servants in the same room. Until the closed style of architecture became popular (early 18th C. I think) guests did not enter a hallway and wait for admittance to one of the living rooms, but stepped right into the center of activity. There was no entrance hall to instill a sense of distance between the newcommer and the household.
In many ways, we’re coming full circle on this. New houses are losing the formal living and dining rooms saved for “company” and gaining huge kitchens and great rooms like the old houses where everything was done in one room. We gossip voraciously about scandals and odd characters, but there are scandals and characters we’ve watched on TV instead of over the fence.
So I wonder which is better – listening to your neighbor sing while she feeds the pigs or listening to someone else’s neighbor sing for Simon and co.
At least the TV performance can be controlled with a volume knob…

I think that, while the concept of personal privacy did grow steadily from the 18th century on, by modern standards we would still be unnerved by having servants everywhere. (Assuming, of course, that we were of the privileged minority, rather than being laborers or servants ourselves.)

I’m still waiting for the robot servants they’ve been promising since I was a child. (“They’ll be practical sometime in the next ten years!”)

I was surprised at the waistcoat, too. The date of it was turn of the century, up to about 1805. I wonder if we’ve been a bit brainwashed about our gents wearing only elegant dark tailoring. Could it be Heyerism self-censorship? After all, when she was writing, guys in pretty clothes would have been considered effiminate. I hate to think of all the embroidery sweat shop employees turned out into the streets to starve…
Janet

I’ve never watched American Idol though of course one would have to live under a rock not to have heard about it. I find it painful to watch people embarrass themselves so instead I watch things like Who’s Line is it Anyway. 🙂

OTOH a Regency version would be fun. I’m not sure who the contestants would be but I can see Brummell as a judge.

I don’t watch American Idol because I simply just really don’t care who can sing and who gets a contract. LOL I’m not that big into reality shows, mainly only because there just haven’t been any to catch my interest. But I’ve seen on the news stations that people are asking is it too mean now. . . whether it’s any more or less than previous seasons, seeing the judges and what they say (particuarly Simon) I think is why people a fair amount watch it. And sadly, a lot of people get a kick out of being mean to others. It’s all part of the gimmick I guess.

That is a nice waistcoat though 🙂

Oh, I love privacy, most definitely. I don’t always think of it when I read it, but I can’t imagine having a maid around while I’m taking a bath or them helping me dress, before putting on the undergarments. LOL 🙂

And when I saw the line about Brummel being a judge — he’d be good on, what’s that show on Bravo. Uh, Project Runway I think? The one with aspiring designers is what I’m thinking of. He’d be good there. 😉