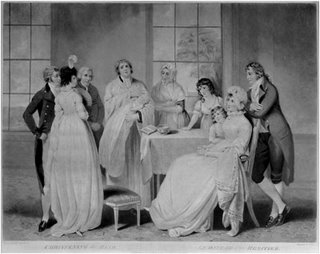 I probably have more trouble deciding what to name my characters than most Georgians did naming their babies. Just yesterday I was working on the second draft of my work-in-progress and wasted a good ten minutes figuring out a name for a maid-of-all-work. Becky. Earth-shattering or what?????

Although I use lots of placeholders like (valet) or (aunt) in my first drafts, my heroes and heroines won’t cooperate until I’ve named them correctly. I used to be thoroughly enamored of lovely and unusual heroines’ names such as Georgette Heyer used (Venetia, Ancilla, Anthea) and wanted to do the same for the heroine of my first Regency, LORD LANGDON’S KISS. I decided her scholarly father would choose an obscure Greek name for her and came up with Melinna. Then a critique partner said it sounded African American. Ack! That spoiled it but it was a good thing as the name really didn’t suit her. I renamed her Nell and the story just opened up after that.

Many of the Georgians also limited themselves to a small group of fairly traditional names. I’ve searched in vain for the original article but I know I’ve read that some very high percentage of men during the Regency had one of 5-6 royal names including George and Charles. Jane Austen had 5 guys named Charles in PERSUASION alone. Jo Beverley has an article on Regency names on her website. I totally agree when she says that to use an unusual name, one must consider why the parents would have chosen it.

I try to find something that evokes the character, something that is historically plausible and not too much of cliche. I avoid names for heroes that evoke “devil” and “demon”: Damon, Devlin, that sort of thing, also names including elements of “hawk” and “wolf”. I wouldn’t fling a book with such names but they don’t feel right in my own books. I no longer strive for very original names either. I’d rather use a common name and strive for originality in the characterization.

It does bother me when I see historical romance heroines with names that are gender neutral or historically masculine. While the heroine’s name in WHITNEY, MY LOVE by Judith McNaught, isn’t what has prevented me from reading it, it niggles. It seems like Courtney and Chelsea are not far behind.

Going sort of off-Regency, I’ve heard one parent say she named her daughter Courtney because she didn’t want to limit her chances with an obviously feminine name. I have my doubts about that strategy, since once girls are given a certain name, people start avoiding using it for boys and it assumes a feminine connotation.

I suspect many readers of historical romance would be confused to read about a hero named Courtenay (the older spelling) or Evelyn. Georgette Heyer used both of these for male characters in her books but I doubt editors would permit such a thing now. I’m also not sure I’d ever name a character Fanny. It’s historically accurate and quite pretty but I just don’t know if readers can get over its various slang usages.

For surnames, I often go to a map of England and look for minor place-names that sound good. Sometimes I’ll mash the beginning of one with the end of another (things like -wood, -hurst, -ton, etc…) until it feels right.

So for my fellow writers, how do you come up with names?

As readers, what are some of your favorite character names? What sorts would you like to see more of? Are there any you find off-putting?

And what do you think of modern day naming trends?