This cover discussion begun by our Janet Mullany on Jan 25 is still intriguing me! I know that what makes a good cover is all really personal preference, but I thought it would be fun to continue the discussion

My position is that a handsome man on a romance cover is going to attract more attention than a cover without a handsome man, even if that cover has beautiful flowers on it.

Now, the handsome man does not have to be without half or all his clothes–those covers, I agree can be embarrassing. (So I guess I’m not really fond of “mantitty” covers, as Janet so cleverly called them), but if I am browsing the romance shelves, not in the market for any specific book, the books I’m going to pick up first are the ones with a handsome man on the cover. 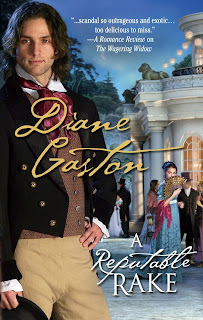 This is why I LOVED my cover for A Reputable Rake. I could not have asked for a better cover, by far my favorite. The Rake is just so handsome and his expression perfectly represents the hero of the book. 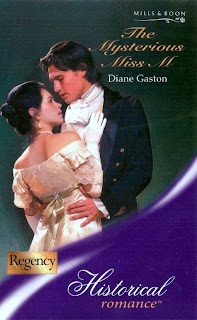 My Mills & Boon cover for The Mysterious Miss M comes in a close second, because it had a handsome man in a very romantic pose. As my first book cover ever, I was over the moon about this cover and I still love it. 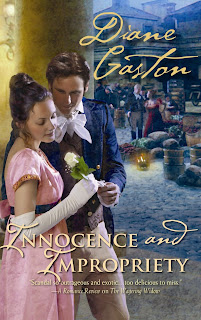 Now I prefer both of these covers to my cover of Innocence and Impropriety, arriving in bookstores March 2007. This cover has both the handsome man and the romantic pose, but it is a tad too sweet for me, and the book is not quite that sweet. Still, I like this cover. I love the setting of Covent Garden in the background. If it were on the shelf right next to A Reputable Rake, I’d bet A Reputable Rake would be picked up first.

I browsed the All About Romance Cover contest archives for examples. Take a look at these two beautiful Jo Beverley covers (the double image means they are “step back” covers). 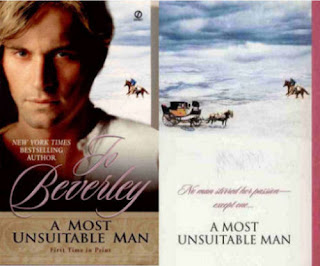 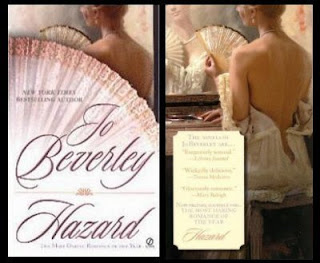 They are both wonderful covers, but which would I pick up first? The one with that very handsome man. 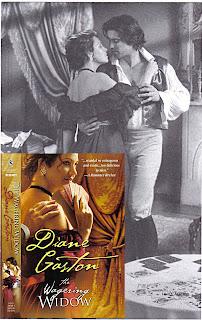 My cover for The Wagering Widow was nice because it was provokative and hinted at that handsome man by showing his hand. The black and white image is what you would see just inside the cover, so there was a handsome man and the romantic pose if you opened the book. 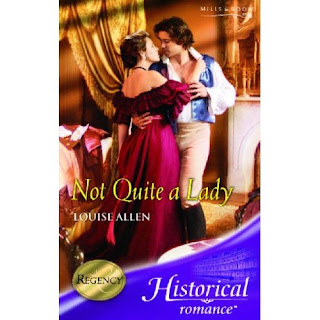 The same image appeared on Louise Allen’s Jan 2007 Mills & Boon, Not Quite a Lady.

I cannot be objective, though. I don’t know which I would pick up first, if they were side by side, Not Quite a Lady, with its handsome man in a romantic pose, or the provokative, A Wagering Widow?

What do you all think?
Does a handsome man on the cover influence whether you will pick it up, at least to read the back cover copy?

Do you want to vote for a favorite cover? Cover Cafe has a contest, formerly sponsored by All About Romance!

Speaking of handsome men on romance covers, in March, the cover model for The Wagering Widow and Not Quite a Lady, Richard Cerqueira, will be doing a guest interview with Risky Regencies. So let me know if there is anything you would like me to ask Richard about what it is like in a romance cover shoot.

Diane Gaston is the RITA award-winning author of Historical Romance for Harlequin Historical and Mills and Boon, with books that feature the darker side of the Regency. Formerly a mental health social worker, she is happiest now when deep in the psyches of soldiers, rakes and women who donâ€™t always act like ladies.
View all posts by diane →
This entry was posted in Uncategorized and tagged Uncategorized. Bookmark the permalink.

26 Responses to More on Covers–Men or Flowers?