I like food. I like to read about food and cooking although I rarely follow recipes. So I very much enjoyed this entertaining book by Ian Kelly (Diane blogged about his biography of Beau Brummell a few months ago) about the great chef Antonin Careme, who cooked not only for Napoleon but also for the Prince Regent (who was delighted to hire his rival’s chef), Talleyrand, the Rothschilds, and the Tsar of Russia.

It’s hard to believe it now, when reading Careme’s lavish recipes–for instance, Les Petits Vol-Au-Vents a la Nesle–that his techniques and innovations formed our modern dining experience. He introduced dining a la russe–that is, with food individually plated and served, which, by the end of the nineteenth century, replaced dining a la francaise (where the food was placed on the table and diners fended for themselves). He believed vegetables should be served slightly crisp and that cooks should wash their hands. He invented the chef’s toque. He cooked for kings but he came from very humble beginnings–like a Dickensian hero, he was abandoned when very young to fend for himself on the streets of Paris.

Early on he developed an interest in architecture, taught himself to draw, and later became famous for his extraordinaires–elaborate architectural centerpieces made of spun sugar. These huge, fragile masterpieces were recycled and in some cases outlived their creator, who succumbed, like many in his profession, to charcoal poisoning at a relatively young age. 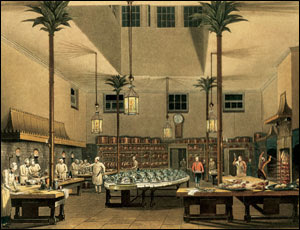 This is the entire picture from which the cover art was created–the kitchen of the Royal Pavilion at Brighton, pretty much as it was during Careme’s time there (1816-1817)–the palm tree leaves were added later. The center table is a huge steam table to keep food warm.

You can visit the kitchen as it looks now–scroll down the page to look at a 360 panoramic view.

And if you’d like to buy the book, it’s on sale at a massive discount (along with many other goodies) at Daedalus Books.

I don’t think I’m going to attempt any of the recipes, even the simpler ones–and Kelly warns that the modern palate may find them a little bland. But I do like reading about food and life below stairs, so I really enjoyed this book. How about you? Are you a cookbook junkie? Have you ever attempted a historic recipe?

I have done research with my sweetie on the history of cheese, and can make bag cheese like in my historical period (pre-1600). I have even done a lunch at one of our medival events (I’m in the SCA). And I have done a fair amount of research into historical booze recipes. So yeah, I think I have. 🙂

I love the history of cooking through our period and the ones alongside it because there’s room for upward mobility, because a master cook and especially a genius chef could be a prima donna, because there’s so much terrific upstairs-downstairs stuff you can do.

Oh yeah, and then there’s the food.

I know more about the history of French cooking than English, but that’s ok, since a lot of master French chefs crossed the channel after the revolution.

Two wonderful books from my French researches are Savoring the Past: The French Kitchen from 1300 to 1789 by Barbara Ketcham Wheaton, and Domestic Enemies: Servants and their Masters in Old Regime France by Cissie Fairchilds (which I include because it tells some of the rules of petty grifting all cooks knew — as indispensible, I should imagine, as a good Bechamel sauce).

Wow, Georg–tell us more! I have known people who had some remarkably unsuccessful experiments making cheese with hanging socks full of rotten milk…
Pam, I heard that some of the dispossessed French aristocracy became cooks in London–naturally I can’t remember any names or details–but I believe one founded a London club???

What a horrible thing to do to a sock! Bag cheese refers to making a bag of *cheesecloth* and draining the whey. Here’s an article my sweetie wrote about it:
http://georgresearch.blogspot.com/2005/01/making-simple-bag-cheeses-cheese-in.html He gave the talk and handed out the paper, and I made cheese with a portable gas stove.

Janet, I’ve seen the Pavilion kitchen. It is a wonder to behold!

I did try a Regency era soup or something for WRW’s Historical Day a few years ago, but I am so Not-A-Cook.

I do, however, love the TV show Top Chef!

My most successful was probably a syllabub — wow. Though once when I made it, it wouldn’t solidify… I suspect it has something to do with the acidity of the lemons…

What I love about period recipes (and I don’t find them bland, by the way — if you use fresh ingredients, just plain bread and butter tastes fantastic) is the different mixture of flavors. We’re used to caraway seeds on rye bread, but put them in a sweet, and it’s so different!

Some of my favorite sources for period recipes and info are “The Jane Austen Cookbook” (by Black and Le Faye), English Heritage’s “Food and Cooking in 18th Century Britain” (by Stead) and the 19th Century version by Black, and “Recipes From the Great Houses” by Barry. And Todd has a lot of fun with “Lobscouse and Spotted Dog”!

We have a cookbook from Chaucer’s England (tertiary source, of course) and have made meat dishes and sweet ones, our favorites being fenberry pie and almond fritters.

Georg: Historical alcohol recipes! Ooh. Do you have a reasonable mead recipe?

Janet, the spun sugar held together with gum reminds me of the final episode of the second season of Bravo TV’s show “Top Chef,” where one of the contestant chefs loves elaborate presentation.

And I SO didn’t need a discount book site to feed my addiction.

What are fenberries, Keira? Are they a kind of berry, or does fenberry pie contain other berries, and it’s the pie people in the fens eat or something??? 🙂

🙂 Fenberries are cranberries from a particular type of dwarf shrub that used to grow in the wild in marshes and bogs in Britain and northern Europe.

We used garden-variety (well, supermarket-variety) cranberries, and frozen ones once, too. (gasp!)

I like the Jane Austen Cookbook and have also tried (with varying success) to adapt recipes from The Complete Servant, by Samuel and Sarah Adams.

I recently made Maidstone Biscuits. Yummy. 🙂

Article on getting started on brewing mead: http://georgresearch.blogspot.com/2005/12/on-mead-basics.html

If you have brewed before, here’s the recipe for 5 gallons:
Bring a gallon of water to a boil. Shut off heat. Dissolve in ~12 pounds of honey. Let cool to room temperature. Add to a 6.5-gal carboy with enough water to hit the 5 gallon mark. Add yeast nutrient and champagne yeast. Ferment as per wine.

For resources for historical mead, may I suggest The Closet of Sir Kenholm Digby Opened? (Ken is misspelled and there may be more words in the title). Curye en Inglyshce is a better source, but only if you read Middle English. The English Housewife by Gervase Markham is also wonderful and covers *everything* a goodwife should know.

Elena, your Maidstone Biscuits sound rather like the almond cookies Fabienne makes in Dedication, except I ground the almonds into a sort of coarse meal. Or rather, the recipe I cobbled together to give out at booksignings (and if anyone would like it, email me via my website).

I agree, Cara, that really fresh ingredients make simple recipes outstanding–and in Careme’s time, all the spices would probably have been freshly ground, and that makes a big difference.

I would love to try some period foods, but as long as I could find someone else to cook them. I’m not a cook, and I will be one when I have to, not because I want to. LOL 🙂

I am a foodie. This book sounds wonderful. I love learning about what people feasted on through the years. Friends of mine have a Rennaissance feast every year. How cool is that!

I am still trying to find out how they managed those paper thin slices of ham Regency rakes and ladies were so fond of! It would have to take a steady hand and a sharp blade to pull it off especially since the cold meats slicer wasn’t invented until the 1860s.

See, only a foodie would dig that deep. It also helps to be in the business, LOL!

Georg: MANY, MANY Thanks!!!

I think they did have steady hands and sharp blades — if I were writing a Regency chef, you may be sure he would, anyway.

Meanwhile, I’m in awe that the 18th century French had developed most of what we now think of as haute cuisine on stoves whose burners didn’t have adjustable temperatures (I think, though I’m not sure of this, that Benjamin Franklin might have contributed to the invention of adjustable burners).