How to Keep Warm 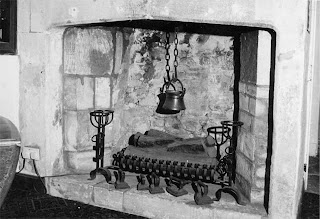 It’s cold here, but I’m one of the lucky ones in my area who still has power, and of course in a modern house it’s only a question of turning up the thermostat, or, as I urge my family, to put on another layer of clothes. I haven’t lived in a house with a fireplace for years and on nights like this I think I’d like to have one….and in the Regency that’s all you would have–if you were lucky.

If you were in fairly humble circumstances you would also be cooking on the only source of heat in your house. (An interesting fact–scholars have determined that one of the major causes of death for women in the eighteenth-century was not from burns while cooking over an open fire. Basically, you can tell if your skirts catch on fire and back off.) 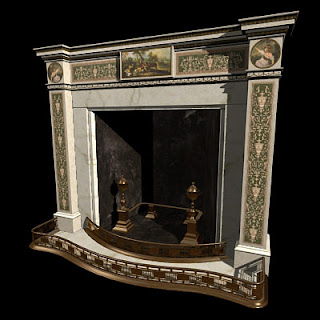 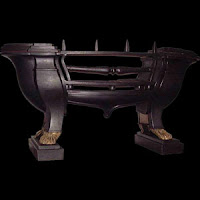 Further up the social scale, you might have a fireplace that looked like this, and maybe even a grate designed by the great (sorry) John Nash himself. 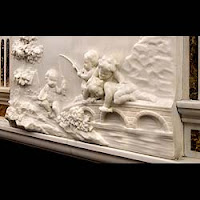 And naturally, you’d commission some fine marble decoration for your fireplace. You’d have a staff to keep the marble–and the rest of it–clean, because coal is dirty. 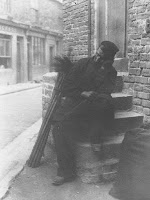 Very dirty. The reason London doesn’t have infamous “pea soup” fogs anymore is that coal was banned in the city about forty years ago. So your unfortunate housemaids would battle the black dust every morning, and meanwhile a nasty accumulation would build up inside the chimney itself, necessitating a visit from the sweep. 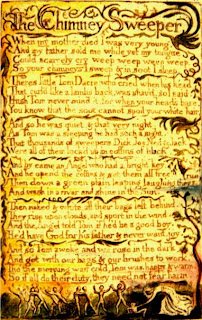 The sweep would bring with him a little boy to climb inside the chimney and clean where the long brushes wouldn’t go–one of the worst jobs a small child could have. Many Georgian houses have flues which take odd twists and turns (for instance, not all the chimney pots on the roof may be functional but they are there for aesthetic symmetry). William Blake wrote about the wretched life of the child chimney sweep in the Songs of Innocence and Experience, and later in the nineteenth century Charles Kingsley’s novel The Water Babies was an expose of the trade.

But unfortunately, however much of a roaring blaze you had, you’d still be wearing muslin, and one side of you inevitably would be cold. So you’d have to do what I continually urge my nearest and dearest to do to keep the heating bills down–put something else on. Shawls, made a fashion item by the Empress Josephine, were something of a necessity. 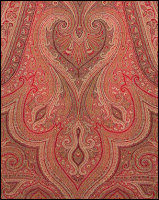 So what’s your favorite way of keeping warm? Do you like a real fire, do you put on more clothes, or do you snuggle up with a hero (picture not provided!)

The short answer: I prefer to put on more clothes.

I don’t like gas fireplaces, unfortunately the fire-of-choice in modern houses. The unburned gas that leaks makes me nauseous. I love crackling wood-burning fires in fireplaces; however, I do like the modern conveniences of the fire-log. I’m hardly the intrepid outdoors person that I will chop wood and use that in my fireplace.

The other modern convenience I most enjoy is central heating. No matter, how much I enjoy reading Regencies, last fall’s stormy days without electricity taught me a good lesson. I’m miserable when it is cold inside the house. Conversely, I love it when it is clear and cold outside the house; I enjoy walking in the bracing sunshine.

Nothing I like better to keep warm than a knit afgan and a hot cup of tea!

How about snuggling with a hot hero under a paisley shawl in front of a nice wood fire?

Hmmmmm, Elena, I think I just revised my list!!!

An interesting fact–scholars have determined that one of the major causes of death for women in the eighteenth-century was not from burns while cooking over an open fire. Basically, you can tell if your skirts catch on fire and back off.

Not sure I buy this (or at least I’d want to see the data they’re using with my own eyes). I do A LOT of historical reenacting, and this includes cooking over a fire in full garb. The poor and servants (those who would be doing this) would most likely be wearing linen and/or wool. Both of these fabrics are extremely hard to catch on fire (esp in a damp climate, as they retain moisture). I’ve dragged sleeves and skirts through camp fires, I’ve tripped and fallen partially into a fire (!), I’ve NEVER managed to do more than singe my clothes.

My childhood home had a fireplace, and before we got central heat we used it regularly to supplement our baseboard electric heaters. I loved the smell of it, the hypnotic dance of the flames, and most of all leaning against the warm bricks of the fireplace on a cold night.

I vividly remember an ice storm in 1979 or so where we were without power for a week (we lived in the country) and by the second day were sleeping in the living room to be near the fireplace, our only source of heat. I was writing a story for a class at school, and I did it by camp lantern and firelight on my mom’s old manual typewriter!

I believe people did burn to death a lot, though I expect they were mostly asleep in front of the fire, not cooking.

Kalen, don’t you think the outer clothes of many people would be

1) not washed often, and eventually thick with lots of grease, and

2) fastened on it such a way that they sometimes couldn’t be thrown off quite as quickly as our modern clothing?

I have a book with newspaper excerpts from period East Anglian newspapers, and it seemed to me there were an awful lot of items about people burning to death from one spark. I’ll see if I can find the book!

Okay, these are excerpts compiled by Sheila M. Hardy in “1804: That Was the Year” (Brechinset Publications, Ipswich, 1984) from the Ipswich Journal:

“Sunday, as the wife of John Brew, a watchman in Whitechapel, was reading the Bible at the fireside, a spark flew from the fire and set her clothes in a blaze; and before any assistance could be got, she was so miserably burned, that she languished until Monday and then expired.”

“Miss S. Smith of Dorchester was alone one night at her brother-in-law’s, C. Cozen’s, when on fetching wood from the cellar, the muslin of her dress caught in the candle. She was burnt from the neck down. She survived some fourteen hours conscious enough to relate the events in spite of the pain.”

Sorry, but I just don’t believe all that many people had their clothes catch on fire.

One of the examples states “muslin” specifically. I’ll buy that muslin would go up pretty quickly (as will silk). But the vast majority of people were wearing linen and wool, and they’re just damn hard to catch on fire (and they’re pretty easy to beat out).

So maybe “a lot” of middleclass and upperclass women who were wearing cotton and silk caught their clothes on fire and died, but the vast majority of people were not middleclass or upperclass.