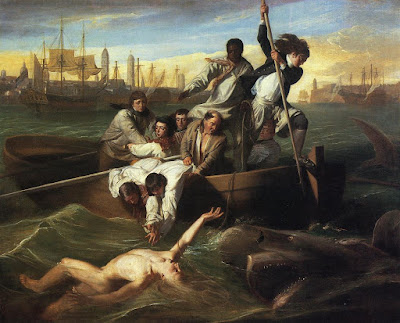 Barbara Metzger is a hard act to follow, so what better to do than show a shark.

This is one of my favorite paintings- Watson and the Shark by John Singleton Copley, painted in 1778, the first of Copley’s “History Paintings.”

One copy of the painting (there are two, I believe) hangs in the National Gallery of Art in Washington DC. I can remember seeing it when a child and now every time I go to the gallery, I must stop by and look at it.

It is a huge painting, a glorious and fearsome sight! I love the drama and emotion of it. The composition is ideal, making the eye travel from the highest figure with the pole to poor Watson, so bright in his nakedness and the shark, so sinister and murky.

The painting depicts a real event that took place in Havana, Cuba. Brook Watson, a 14 year old orphaned crewman, went for a swim and was attacked by a shark. In the painting, Copley successfully makes us wonder if his shipmates could save Watson. They did, although he lost a leg. Watson went on to become a London merchant and even served as mayor of London in 1796.

John Singleton Copley was an American who was urged to move to London by Joshua Reynolds and another American artist, Benjamin West. He and his family settled in London at the dawn of the American Revolution. Watson and the Shark was the painting that brought Copley his membership in the Royal Academy. By “our period” Copley’s works were no longer receiving critical acclaim, although he continued to live and work in England. He died in 1815.

Watson and the Shark appeared in the first book I ever wrote, an unpublished romantic suspense about a mental health social worker (I followed the advice of “write what you know”) who finds her favorite client dead of apparent suicide. The police detective charged with investigating the death believes her that the death was murder, not suicide. A print of Watson and the Shark hung in her office, as a reminder to clients that no matter how desperate and hopeless life becomes, there is always hope. (And, no, I did not have a print of Watson and the Shark in my office in the mental health center)

My pal Colleen Gleason (remember her book The Rest Falls Away and her interview here) told me about this wonderful website that offers art images free of any copyright restraints. I found the painting’s image there.

Whoo hoo! I expect we can have fun with this site!

Have you any painting or other piece of art that has affected you in some special way? Can you find it on Athenaeum?

Diane, every time I go to the National Gallery I have to check out this painting, too, and it’s always my first stop when I take visitors there.
Also, if you ask any guard where “the shark painting” is, they’ll know exactly what you mean and direct you to the right place!
Janet

Diane, on our trip to Paris 2000, I was lucky to actually see these two paintings, which are amongst my favorites.

The Fortune Teller by Caravaggio in 1598 at the Musée du Louvre.

Profile of Lydia Cassatt by American painter Mary Cassatt in 1880 at the Musée du Petit Palais.

Eeek. Wonder what happened to my name in the previous post. Hope it shows up now.

It did show up the second time, Keira! Blogger is *so* weird! 🙂

My favorite paintings (Fragonard and other French 18th century painters, and Gainsborough) aren’t for the most part on the Athenaeum site, but I do love Sargent too, and they have a ton of him! So thanks for the link, Diane — I’ve bookmarked it! (Ooh, and I’ve just noticed they have a lot of Canaletto too — I love Canaletto. That was my favorite room in London’s National Gallery. Ooh, and they do have a bunch of Reynolds. Got to go take a look now.)

Well, the name showed up, but now the icon is gone. Phooey!

Janet, I’m visiting the National Gallery next week so I’ll get another look. I also look for the painting of Wellington…

Keira, who knows what Blogger hath done. I was impressed that you could put hyperlinks in your comment1 How you do dat???

Cara, sorry…..I expect you’ve lost at least an hour or so….

Diane, you can write a hyperlink like this, after removing all spaces in between:

Here’s one I love: Lady Torrens and her Children, by John Linnell. It makes me think of a heroine during her HEA though I have to imagine the hero just off-stage looking like a grown-up version of the boy on the right.

This picture is not on Athenaeum. It’s on Cathy Decker’s Regency Page. Here’s the url:

Oh, great, Diane, yet another way for me to waste lots of time online! :)) This is a fun site. There are so many paintings I love, but I did find 2 of my favorite Renoirs there–Luncheon of the Boating Party, and By the Seashore

What did I do wrong, Keira? The hyperlink didn’t work!

It is Miss Carolline Hopwood

Probably because you didn’t remove all the spaces, Diane?? Let’s see if this works:

That did work! So, Diane, you remove all the spaces *except* the space between “a” and “href” right at the beginning….

(Thanks for the tip, Keira!)

I apologize I wasn’t clear enough before, but I’m glad you guys figured it out.