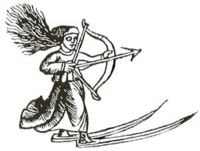 I just got back from a day on the slopes. Conditions were good, the weather was glorious (for a change!) and we all got back in one piece. đź™‚

Of course, since this is my blog day I had to think about whether skiing as such even existed during the Regency and whether anyone in our stories might have seen or done it. So I did some appallingly brief research into the subject and read an article on the history of skiing at http://www.skiinghistory.org/history.html.

There I learned that there are Stone Age rock carvings around the Artic rim showing “ski-shod hunters in hot pursuit of game”. There are further references and images throughout ancient history, including this picture of a skiing Lappish woman (or goddess–what is the difference?) by Olaus Magnus (1553).

So skiing has been around a long time, although it first began as a practical means of transportation in northern countries. The first skis were of the cross country type, attaching at the toe but allowing the skier to lift his/her heel.

Mountain farmers in the Telemark region of Norway refined cross country skiing, introducing a technique for turning which is known by the same name. I’ve seen Telemark turns performed by expert cross country skiers on regular alpine slopes and it’s quite impressive.

Interestingly, according to the article the British gave the impetus to the development of alpine or downhill skiing. “This idealistic sport of the Norwegians, stressing endurance on snow and fearless flight through the air was wrenched around by British skiers on the Continent to focus on the experience of ski descent on the snow, a form much more appealing to many more people.” This happened around the late 1800s and the popularity of downhill skiing rose when Mathias Zdarsky of Austria popularized the “stem turn” sometimes called the “snowplow” which is still taught to most beginning skiers.

What I have not been able to discover is what British tourists on the Continent might have witnessed during their Grand Tours. I can certainly imagine some hardy young gentleman seeing skiers racing down a slope in the Alps and deciding to emulate them. Anyone read an account of a Grand Tour to confirm this notion?

By the Regency the Little Ice Age (which some theorize is partially responsible for the glorious sound of Stradivari violins) was ending, so I doubt conditions existed in most of the British Isles to really encourage skiing. It’s fun to imagine some hardy Scotsman flying down the Cairngorms, perhaps not in a kilt. An intriguing image, though. đź™‚ 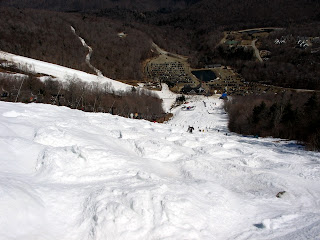 So do any of you know more about this than I do?

And does anyone else ski?

If you do, are you one of the brave souls who attempt slopes like Outer Limits in Killington, Vermont (pictured above)? I have looked at it from the safety of a lift and freely admit that a 45 degree slope covered with moguls (bumps) the size of VW bugs does not appeal to me. But I have friends who love just that sort of a challenge. 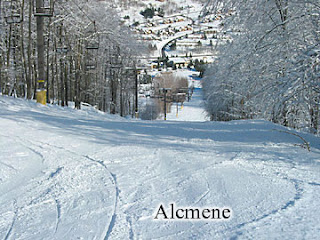 Or are you an intermediate like me? Here’s one of my favorite runs: Alcmene at Greek Peak. Steep enough to be interesting but not too scary.

Or would you prefer to stay in the lodge sipping hot chocolate or crooked coffee, perhaps wearing a fake cast?