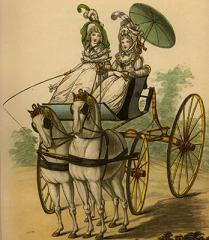 Last week during Megan’s post on historical accuracy Cara and Kalen both talked about errors regarding horses, like the Bionic Horse that can gallop for hours nonstop. It got me thinking about some of the other howlers I’ve read.

Here are just a few.

Errors in terminology. The heroine who referred to the strap that held the saddle on as a cinch. That would be OK if she were a cowgirl but in English riding it’s called a girth. The words phaeton and curricle used interchangeably for the same carriage. A phaeton (left) has four wheels; a curricle (below) two. 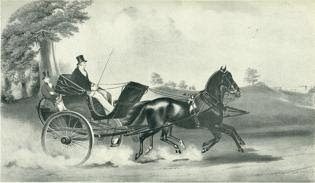 But these are really minor gaffes compared to the abuse of terms for horses themselves. 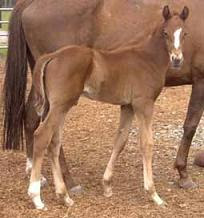 Confusing a pony with a baby horse. A baby horse is called a foal (or colt if male, filly if female). This is a foal. No one in his right mind would put a child or small adult on its back. 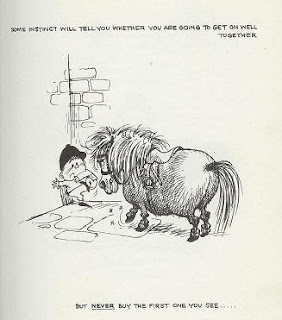 Ponies are a type of horse that are small even at maturity. They are generally longer-lived and hardier than horses. This is a pony. As you can see it is not a baby. đź™‚

Sex changes. Yes, I’ve read more than once where a mare turned into a gelding or stallion during the course of a ride. It’s as if the authors just looked in a thesaurus to find alternatives to “horse”. Even if these were mistakes of the oops variety, where were the copy editors?

Testosterone gone wild. Most male horses were and are gelded, to make them more manageable and to preserve only the best for breeding.

Still I can’t deny there are few more virile and beautiful images than that of a powerful stallion and I understand why so many historical romance heroes ride one. 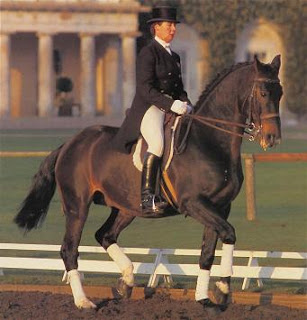 Stallions can be extremely trainable and responsive mounts. While I was in England I was lucky enough to see Jennie Loriston-Clarke riding her glorious stallion, Dutch Courage. The rapport between those two was a wonder to behold.

However, stallions generally do require more expert handling than other horses. So I couldn’t help raising my eyebrows on reading about a hero giving the heroine her first ever riding lesson on his stallion or about the hero who kept teams of black stallions stabled along every major roads in England. My feeling is these authors are trying a little too hard with the sexual imagery!

OK, time to share. What are your favorite horse bloopers from Romanceland?

And which authors do you think get horses best?

My favorite has to be Julia Ross. The best horse scenes I’ve ever read are from her MY DARK PRINCE (read more at http://www.juliaross.net/mdphorses.htm).

Elena Greene grew up reading anything she could lay her hands on, including her mother's Georgette Heyer novels. She also enjoyed writing but decided to pursue a more practical career in software engineering. Fate intervened when she was sent on a three year international assignment to England, where she was inspired to start writing romances set in the Regency. Her books have won the National Readers' Choice Award, the Desert Rose Golden Quill and the Colorado Romance Writers' Award of Excellence. Her Super Regency, LADY DEARING'S MASQUERADE, won RT Book Club's award for Best Regency Romance of 2005 and made the Kindle Top 100 list in 2011. When not writing, Elena enjoys swimming, cooking, meditation, playing the piano, volunteer work and craft projects. She lives in upstate New York with her two daughters and more yarn, wire and beads than she would like to admit.
View all posts by Elena Greene →
This entry was posted in Uncategorized and tagged historical accuracy, horses. Bookmark the permalink.