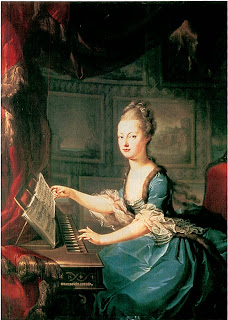 I promised to share some of my Marie Antoinette and/or Henry VIII research, and, since I finally got around to organizing my sloppy notes, here is the first!

Music is one of my favorite things (when I was a kid, I told everyone I was going to be an opera singer when I grew up–until I discovered I have a terrible singing voice!). So, I always love reading about composers and court music, of which both the 1780s and the 1520s had a plethora. Marie Antoinette and Henry VIII were both musical in their own ways (the portrait is MA at the spinet), and both enjoyed the finest instructors and performers. More about England later–this week we’re in France, in the middle of the last showdown between Marie Antoinette and Madame du Barry.

The man caught in the middle was Christoph Willibald Gluck (1714-1787), one of the most important opera composers of the day. Born in Bavaria, his first position was in a Milan orchestra, where he received lessons from Giovanni Battista Sammartini. His first opera, Artaserse, premiered on December 26, 1741 to some success, and he traveled to London, Saxony, and Copenhagen before settling in Vienna in 1753. He became Kapellmeister to Empress Maria Theresa, and instructor to her children, including Archduchess Antoine (who seems to have been more enthusiastic than really talented!).

Gluck advocated the reform of opera, wanting to eliminate all that was “undramatic.” He insisted on focusing on human drama and passions, making the words and music of equal importance, doing away with folderol like mannered ballets. His best-known opera, Orfeo ed Euridice, had its first performance on October 5, 1762, with the famous castrato Guadagni in the title role.

In the 1770s, Gluck’s Viennese career was slipping a bit, so he was happy to accept an invitation from his former pupil to come to France. In 1774, he signed a contract to perform six works at the Paris Opera. The first, Iphigenie en Aulide, was to premier in April, and it sparked a war. Gluck knew his new style wouldn’t catch on right away with the French, stating “There will be considerable opposition because it will run counter to national prejudices against which reason is no defense.” But somehow the music got mixed up with Court factions! Louis XV’s mistress, Madame du Barry (who detested Dauphine Marie Antoinette and her snooty Viennese ways!) and her supporters brought in the more conventional Italian composer Piccinni. It was the Gluckists vs. the Piccinnists!

It didn’t much help that Gluck refused to coddle tempermental French stars. To Sophie Arnould, the Iphigenie, who wanted more fancy arias for herself, he snapped, “”To sing great arias, you have to know how to sing.”

But in the end the Gluckists triumphed. The premier on April 19, 1774 was packed–even du Barry couldn’t stay away. Mari Antoinette came with her husband, the comte and comtesse de Provence (her brother and sister-in-law), the duchesses de Chartres and de Bourbon, and the princesse de Lamballe. The opera started at 5:30 p.m. and ran even longer than the usual five and a half hours because of the copious applause. Even Rousseau left the theater in tears.

The run of Iphigenie didn’t last long. At the end of April, Louis XV fell ill with smallpox and died. Gluck’s patron was now Queen, and she saw to it he spent several years traveling between Vienna and Paris. He sponsored many patrons in his turn, including Salieri.

I once saw a performance of Orfeo, blessedly NOT five hours long (more like three), and really enjoyed it. Great singing, but sadly no Gluckist/Piccinnist throwdown in the audience. What’s some of your favorite music? Which side in the G/P battle would you have been on?

Amanda, I am so way out of my league here!! But I love the drama that occured around the composers and the Queen and Mme Du Barry! I can’t wait to see what you do with this information

I’m fairly knowledgeable about music and have never heard of Piccinni. So clearly Gluck won the test of time.

As to my own likes I like a lot of things but classical is my biggest love. Within that broad category I’m pretty eclectic. While I lived there I used to go to the Cleveland orchestra and now I subscribe to the Binghamton Philharmonic. Admittedly not one of the major orchestras but our newish conductor, Jose-Luis Novo, is doing amazing things with it.

There’s a concert tonight and I’m looking forward to Roberto Diaz performing Bartok’s Viola Concerto (composed in 1945). I attended a pre-concert program Thursday night and got to see part of the rehearsal. I learned that Diaz’s viola was crafted by members of the Amati family sometime around 1570. I wonder if they imagined that it would be used over 400 years later to play such wildly difficult music.

I’ve never even heard of Piccinni!

One of the weird things with me and classical music is that when I was most into it, I would play the most mental baroque music possible on the piano, but when I listened, it was to very colorful romantic stuff (Grieg, Liszt, etc).

Todd and I are actually thinking of going to some operas in the next year. I know next to nothing about opera — the only one I’ve ever been to (or even really listened to a recording of) is The Magic Flute!

ran even longer than the usual five and a half hours

Oh, my lord. I saw Beverley Sills sing on one of her last reunion tours. That was very impressive.

And of course I like the opera scene in Moonstruck; other than that, I am way, way over my head.

But I like drama in music. Thanks for the tale of the big catfight.

Amanda, definitely the Viennese/German composers of the classical period. Having mentored Salieri, I wonder what Gluck thought of Mozart. Anything in your research about this?

Since college, I’ve always attended the symphony in some fashion or the other. When I was a student, I ushered at the concerts so I could attend for free, then I attended with friends, and now we’re introducing our little one through their children’s series and classes.

I’m far from being a music snob–one glance at my CD collection will reveal that I listen to everything from heavy metal to classical with forays into all kinds of world music. Rap is only musical form I can’t get into.

(BTW, how do you do umlauts in blogger posts and comments?)

Keira, that is an interesting question! I don’t think I ever came across anything about Gluck’s opinion on Mozart, though they must have crossed paths at some point. (Since Mozart also played at Maria Theresa’s court, though as a tiny child. And of course there’s the probably apocryphal story of him proposing to the equally youthful Marie Antoinette!)

I’ve also never heard of Piccinni outside of this story, and I work for a classical music radio station! I wonder if there is even any of his stuff recorded.

Cara, I love the Magic Flute! All that weird Masonic imagery. 🙂

BTW, Diane, I had to order that “Opera in London” book you blogged about! So thanks a LOT for contributing to my “book problem” 🙂

It is a great book, Amanda. Lots of information!

Music is one of my favorite things (when I was a kid, I told everyone I was going to be an opera singer when I grew up–until I discovered I have a terrible singing voice!).

That’s so weird! I used to tell everyone the same thing when I was a kid! They would look at me in puzzlement and say “Amanda who?”

I’m not all that knowledgeable about opera–I’ve listened to recordings of quite a few, but I’ve actually only been to a handful of performances in my life. Shameful! Very shameful! 🙂