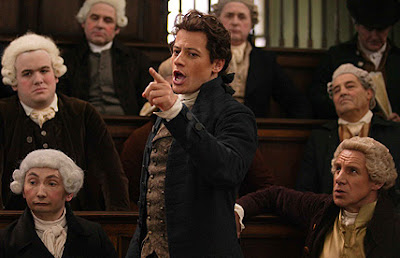 I recently saw Amazing Grace, a passionate (and romantic) film which does a nice job of turning the story of William Wilberforce’s late 18th century fight against the British slave trade into an entertaining movie with a beginning, middle, and end.

The film is by no means perfect. To turn Wilberforce’s struggle into a nice plot arc, there’s a lot of jumping forward and backward in time, which confuses some viewers.

There are also some definite alterations to historical fact. 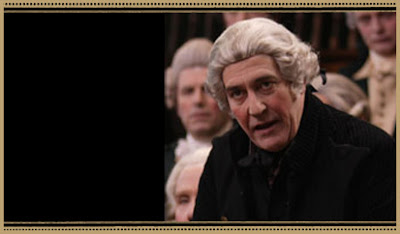 Overall, I really liked the movie. 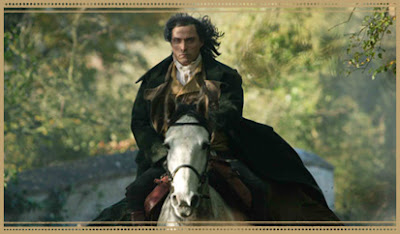 To start with: the cast! Oh, what a cast. We have Ioan Gruffudd as Wilberforce: charismatic, dogged, brooding. (First picture.)

And because we can never have too many handsome, dark-haired actors, we also get Rufus Sewell as rebellious anti-slavery crusader Thomas Clarkson. (Third picture.) 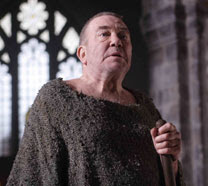 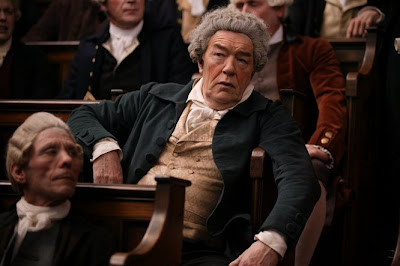 Toby Jones plays the Duke of Clarence, the naval son of King George III (and later King William IV) as a clever and witty bon vivant.

There, isn’t that amazing???? đź™‚ (Just curious — is there anyone here as movie-obsessed as I, who sees something odd there?) 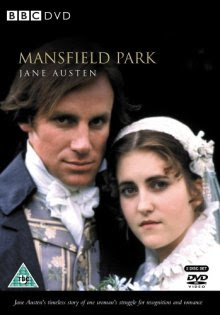 So these two actors played Fanny and Edmund falling in love in 1983, and they play a married couple here. Wonder if they had fun reminiscing?

As I said, I really loved the film. I loved its color, and commitment, and intensity. I loved that we saw sides of this period that we too seldom see. (The scenes in Parliament were all splendid.) And I loved the actors.

And though I don’t have a picture of her here, I liked Romola Garai’s performance as Wilberforce’s love interest quite a lot. Her character is intelligent, forthright, articulate, and Garai carries off both the dramatic bits and the lighter moments equally well.

As for the historical changes I mentioned above…I have mixed feelings here. They mucked about a bit with costumes and hair (as is usual), and though I noticed some of it, it didn’t much bother me. 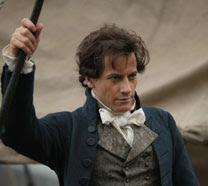 What did bother me rather more was that Pitt and Wilberforce were sitting in the House of Commons together with the Duke of Clarence and “Lord” Tarleton. Yeah, just weird. And even weirder — the real Tarleton was never in his life a peer anyway! Years after the end of the movie, he was made a baronet — still not a peer, of course! But throughout the movie (and on the official movie website), he is consistently referred to as “Lord Tarleton.” And I really can’t think of a single good reason why. (I have thought of one bad reason… Aristocrats are by definition selfish and evil, so they supported the slave trade, so Tarleton had to be made a peer…???)

So… Have you seen the movie? Do you intend to?

Which actors or actresses in it would most tempt you to see it? Or would the setting or the subject most convince you to take the plunge?

Elena Greene grew up reading anything she could lay her hands on, including her mother's Georgette Heyer novels. She also enjoyed writing but decided to pursue a more practical career in software engineering. Fate intervened when she was sent on a three year international assignment to England, where she was inspired to start writing romances set in the Regency. Her books have won the National Readers' Choice Award, the Desert Rose Golden Quill and the Colorado Romance Writers' Award of Excellence. Her Super Regency, LADY DEARING'S MASQUERADE, won RT Book Club's award for Best Regency Romance of 2005 and made the Kindle Top 100 list in 2011. When not writing, Elena enjoys swimming, cooking, meditation, playing the piano, volunteer work and craft projects. She lives in upstate New York with her two daughters and more yarn, wire and beads than she would like to admit.
View all posts by Elena Greene →
This entry was posted in Uncategorized and tagged Amazing Grace, Ioan Gruffudd, movies. Bookmark the permalink.