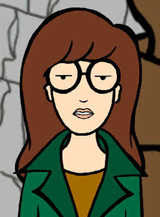 Next Friday, I head to The Homeland (i.e. Massachusetts) to attend the NEC-RWA’s Annual Conference. During that time, I will get to a) ride a bus with my friend Kwana, who is insisting on teaching me knitting (our other friend, Elizabeth, cannot stand buses, so she’s training it there) b) not see Anne Stuart, who had to cancel as keynote speaker c) hang out with my friend Myretta Robens (known on my own blog as the Delightful Phone Friend), and d) look like even more of a ninny; see below.

See, during the Conference there is a party, a party where–wait, here’s the description:

‘Bring Your Fiction to Life’ Costume Party!
Fun Is Mandatory…Costumes Are Optional

Choose any character from fiction past or present…whether from a favorite book, movie, or even your own manuscript.
Someone was inspired to create this fictional character. Come and show us why!

Oh, my lord (and my panic has nothing to do with the quality of the idea–the idea is fine; unfortunately, so is my panic). So who do I pick? One of my favorite characters is MTV’s Daria (and I think I look a smidge like her, too), but–dressing up like a cartoon character for a party? A CANCELLED cartoon character? Might as well just wear the big ‘L’ on my forehead.

Hm. Who else could I be? Last Halloween, I went to a costume party dressed as Miss Havisham, which meant I donned my aunt’s old wedding dress and put some tattered cheesecloth around my shoulders. Equally lame as the Daria thing. Plus Miss Havisham isn’t really a favorite character. 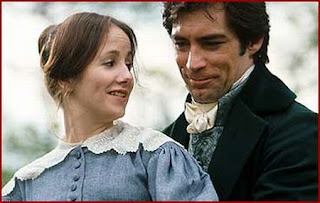 Jane Eyre? Sorta plain garb, mud-soaked boots from tromping around searching her soul? I could do that, but it’s hardly going to feel like I’m at a party. Unless it was an orphan party or something.

I know you’re all wondering why I don’t mention Elizabeth Bennet, but geez, I’m not 18, don’t have Empire waist gowns lying around in my Brooklyn apartment, and I’m even less than tolerable. Back to the literary drawing board.

Who’s your favorite literary character? Who would you like to dress up as?

A friend of mine got into knitting real bad. She loved it. Every week, she’d end up in the yarn store oohing and ahing over patterns and needles and yarn styles. After various attempts of trying to get me interested failed, she sighed and wondered what she would do with all this yarn she’d collected.

Ah, well. I suggested that she could perhaps knit a scarf with that wool, that pattern, and with those needles. And then she could give the scarf to me. My audacity worked. I’m picking mine up next week. 🙂 🙂

Amanda Quick’s psychic books set in the late Victorian age, have this heroine called Lavinia, who is brainy but practical (if memory serves me right.) I’m trying to remember if her was fair or dark. Hm. Anyways. Hope Lavinia will do the trick for you.

Whenever someone asks (as we Riskies do often!)who is your favorite character or some such question that requires memory, my mind immediately goes blank and I can’t remember even reading any book or seeing any movie, ever! (except maybe 300, but I’m obsessed)

BTW, Keira, one of my good friends is named Lavinia. She was a double Golden Heart finalist last year.

I say go as Daria. She’s my favorite character, and you’re both snarky, and you have the glasses. You just need the black skirt and the Doc Martens and you’re set. I may just go as Modesty Blaise, which means I get to wear a turtleneck and a pair of capri pants.

I vote for Daria, too, Megan! I loved that show. 🙂 Godot would be interesting–would that mean you wouldn’t show up at the party at all?

I might go as Daisy Buchanan, because I have a flapper costume. Or Madame Bovary. Or Marianne Dashwood. :))

Wish I could go to the conference, too!

Keira: “Brainy but practical”–I love it! I do love Amanda Quick.

Diane: I am NOT wearing a men’s Speedo to a party. Not.

EKM: You’re gonna look great! I might just do that skirt thing for Daria, but I don’t have any Docs anymore. Weird, huh? I do have red snakeskin boots.

Amanda: I thought of Daisy Buchanan, too, but I don’t really like her as a character.

Goedi: those Shvejk books sound awesome! But as we already know, I’m no blonde, like Lorelei–she was the Marilyn character, right, not Jane Russell?

I vote for Daria. Anyone who doesn’t get it prooves that they are the “loser”. LOL!

My favorite character is unfortunately the main character of an unfinished story that only my friends have read. Jeannie is positively psychotic and yet looks washed out ordinary. I really need to finish the story and try to send it off to the world. Or at least finish the story so she can move on out of my head and get the help she so desparately needs.

Yeah, she’s the Marilyn character, although that was a vicious bit of miscasting.
I realized (too late) that people might think of the movie rather than Anita Loos’ book.
The book is actually funny. And lines like “he always has something quite interesting to talk about, as for istants the last time he was here he presented me with quie a beautiful emerald bracelet” just wouldn’t work when aspirated by Ms. Monroe.

Well, if you have two donuts, you can be Princess Leia. . . the wedding gown might be good if you carry a half mask so you’re Christine from Phantom of the Opera. . . if you have black pants, black jacket, black tie and black sunglasses, you can be a Man in Black. LOL 🙂

Okay, I’m at a loss. . . I don’t seem to watch very many movies with females in them, unless you get a Starfleet uniform, any generation. 🙂

I’m for Daria, too. It just seems to fit.

I have a Regency gown so the practical thing would be to pick a Jane Austen character. Maybe Anne Elliot or Elinor Dashwood a decade (or two, let’s not get too specific here) into their HEA.

I thought about which heroine I would love to impersonate ideally and it would be Lady Alys from Mary Jo Putney’s RAKE AND THE REFORMER. I’d have to get one tinted contact to make my eyes mismatched and also a different Regency gown as mine is too pastel, but I just loved Lady Alys.

What a fun theme for a party! Your ideas sound great–sounds like Daria is definitely the one to go with since it was your first impulse (and cartoon character are often easy to dress up as, I think, because they’re so distinctive). I’d probably go as Mélanie Fraser, the heroine of my own books–I have a couple of empire-waist evening gowns and some Regency-ish jewelry. Last Halloween, I wore the outfit I’d worn to a Russian themed event (black velvet corset top, long silk skirt in reds and golds) and said I was Tatiana from “Eugene Onegin” :-).

Megan: It would be the highlight of the conference if you were to show up in leather speedos. C’mon. Notoriety. Fame.

I’m with Keira…um….Lavinia….but not my friend Lavinia…but Keira’s my friend, too, but she wants to be Lavinia…
Sigh!

I vote for the leather speedo! Or you could go as Gorgo, Leonida’s wife. Wear a white sheet and spout things like, “Spartan, return with you shield or on it.” Or “Ask what a free man would do.”

I’m glad I’m not attending that party. I’m too tall for Frodo and too thin for Nero Wolfe.