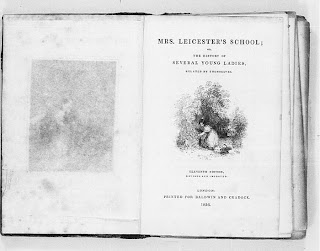 Of the ten stories, three are written by Mary’s brother Charles, and they form a collection of stories told in the voices of young girls who have just arrived at a boarding school. The describe who they are, who their families are, and why they were sent to school.

Some of them are quite charming–one of them prattles on and on about a visit to the country (ooh! pretty sheep! pretty cows! more pretty sheep!) until the tactful Mrs. Leicester intervenes, stopping her in mid flow: I thought I perceived some ladies were rather weary of hearing so much of the visit to grandmamma. Some of them have a macabre air: there’s a girl who learns to read from studying the letters on her mother’s tombstone; and a very odd tale about two girls, one born to a noble family and the other a commoner, who are exchanged at birth. They yearn for, and sometimes lose their parents, and often are sent on unexpected visits to distant relatives; now all of them have been parted from their families to attend the school.

It’s an interesting venture into the world of Georgian childhood, but even more interesting in light of Mary Lamb’s life. She suffered from bipolar disorder and when she was twenty-two, murdered her mother. She was in and out of mental asylums for the rest of her life, and cared for by her brother and official guardian Charles, whom, sadly, she outlived. So when I read these stories, I was thinking of what I knew of Mary, particularly from reading Kathy Watson’s biography of Mary, The Devil Kissed Her.

Has anyone read either of these books or anything by Charles Lamb? Or do you have any favorite books that evoke childhood for you?

I have been wanting to read more about the Lambs for quite some time but it’s the usual–so many books, so little time.

Me, too, Janet and Elena! I immediately want to get my hands on the children’s stories and the biography of Mary Lamb!

I recently read the book “Mad Mary Lamb,” which I thought was fascinating! have never read the childrens’ books, though.