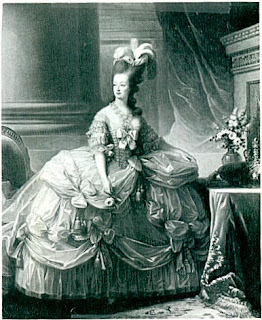 What’s one of the main reasons I’m obsessed with Dancing With the Stars (go, Apolo!)? The clothes, of course! So sparkly and fringe-y and fun. I’ve always loved playing dress-up, and subscribe to way more fashion magazines than is probably healthy. The truth is, I can never actually afford Prada or Marni, and I would never try to squeeze myself into those Edyta-style get-ups from DWTS. But I can always dream! And buy spiffy dance shoes.
One of the earliest of the high-fashion, brand-name modistes was Rose Bertin, favorite designer to Marie Antoinette. Born in Abbeville in 1747, Rose Bertin set up shop as a marchande de modes (female fashion merchant) in 1773, in a luxurious boutique on the rue Saint-Honore. In 1774, she expanded her offerings to include what came to be known as the ‘pouf,’ wild headresses to go with the enormous dresses. These were made in conjunction with Marie Antoinette’s equally snooty and extravagent hairdresser, Leonard, and were built on a scaffolding of wire, cloth, gauze, horsehair, fake hair, and the woman’s own hair, teased up off the forehead. After being doused with powder, the coiffure could become the canvas for all sorts of still-lifes and props (ships, windmills, babies, you name it).
Through her rich clients the duchesse de Chartres and the princesse de Lamballe, Bertin came to the notice of Marie Antoinette, who had just become queen and was feeling her fashion wings (or wild oats). A style was born. One of their earliest collaborations was a pouf titled ‘coiffure a l’Iphigenie’ (to pay tribute to Gluck’s opera), quickly followed by the ‘pouf a l’inoculation,’ to celebrate her husband’s successeful smallpox innoculation. Bertin also designed the queen’s coronation gown, an elaborate affair heavily embroidered with gold thread and sapphires, which almost had to make the trip to Rheims on a special stretcher (until the lady-in-waiting balked at carrying it).
Bertin’s creations (which cost roughly twenty times what a skilled artisan would earn in a year) helped establish France as the center of the fashion industry, which has persisted to this day. But Bertin, reportedly an abrasive woman, was deeply resented, both by the aristocracy (who felt the queen treated her, a mere tradeswoman, with too much favor and distinction), and by the middle and lower classes. She was snooty to would-be customers (for example, refusing to outfit the ‘wife of a mere prosecutor from Bordeaux!’), and the wild extravagence of her creations was derided in the midst of depressions and famines. As a woman, Bertin inspired particular resentment for taking precedence over her male colleagues, and was sneeringly called Marie Antoinette’s ‘Minister of Fashion’ and ‘Minister of Trinkets.’
During the Revolution, Bertin eventually moved her business to London, returning to Paris in 1795, where Josephine was one of her main customers. But fashions had changed, and she soon retired to her house in the town of Epinay sur Seine, where she died in 1813.
A great source for info on this period is Caroline Weber’s Queen of Fashion: What Marie Antoinette Wore to the Revolution.
What are some of your favorite fashion eras or designers? Anyone watching Dancing With the Stars???

I’ve always been fascinated by Worth. Like Madame Bertin he managed to convince the world at large that paying 100 times what anyone else would charge for the same gown make the gown more fashionable.

A lot like some designers today! I was just looking at a cotton shift by a Name Designer a few days ago, trying to decide what made it worth $2000 and a similar one at Target $20. đź™‚

What are some of your favorite fashion eras or designers?

I can tell what is not: That dress that is impossible to fit through doors even sideways. And oh my God, what if you fell down the steps or while going up a hill? You would need a hoist and ten able-bodied men (well, that’s a thought!) to get you ambulatory again.

Keira, I think you may have discovered the true reason for those enormous, heavy gowns! đź™‚

I can’t get over how in the world they could wear that stuff!! I mean, I could never imagine how they walk, or sit or eat or dance or anything else I didn’t think of. Geez, whoever came up with those gowns (and plenty before and since and today) must have been a glutton for punishment or something! LOL đź™‚

Well, obviously the Regency is a favorite fashion era. The gowns were so elegant and one could get through a doorway in them, too! As to what might look good on me, though, some of the simpler late 18th century gowns would be more flattering to my hips. đź™‚