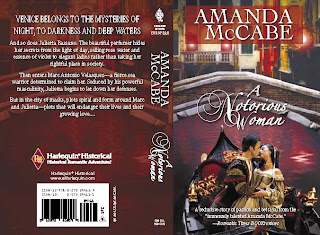 I just got the cover for my next book (out in August from Harlequin Historicals! Pre-order now!), and am so excited I had to share. Her gown looks a little more “Restoration” than “1520s Venice” to me, and the hero in my book actually has long hair, but what the heck. I love the colors, the gondola, and the fact that my name is really BIG. That’s the important thing. 🙂

I was first inspired to write this story a couple of years ago, when I went to an exhibit at the Museum of International Folk Art in Santa Fe called “Carnival!”. Each section was devoted to a different city–New Orleans, Rio, etc. The Rio room was great fun, bright and noisy with samba filling the air (videos and music were used as well as artifacts and costumes), while the Venice room was elegant and mysterious. There were elaborate costumes and masks, beautiful paintings, even a gondola. The perfect spot, I thought, for an elegant and mysterious heroine to hide out, circa 1525! (Venice, that is, not the museum, though it’s great, too)

The carnival (or Carnevale di Venezia, loosely translated from the Latin for “Farewell, meat!”) was first recorded in 1268, and immediately gained a reputation for a subversive and naughty festival, running from a few weeks before Ash Wednesday and ending Shrove (or Fat) Tuesday. On Ash Wednesday, the party was over. Over the centuries, various laws were passed to try and curb the celebrations, including banning the wearing of masks, but that didn’t last too long (thankfully for my characters, who go about in disguise half the time!). People were allowed to wear masks all the time between the festival of San Stefano (St. Stephen’s Day, December 26) and midnight on Shrove Tuesday.

Venetian masks are usually made with leather or papier-mache, with traditional shapes including the bauta (a mask that covers only the upper part of the face) and the moretta, a black velvet ladies’ mask originating in France. The most common is the white volto, worn with a black tricorn and cloak (very stark and mysterious!).

The 18th century was the height of Carnival hedonism. In 1797, Venice became part of the Austrian Kingdom of Lombardy-Venetia, when Napoleon signed the treaty of Campo Formio. It went into a long decline, before being banned by the Fascist government in the 1930s. In the 1980s, it saw a revival which grows to this day.

I would love to have a Carnival party and invite everyone here at RR! If my house wasn’t so tiny, and I had a canal in the back yard for floating gondolas. Another chance to play dress-up! What would YOUR costume be?

I’m not sure what costume I’d wear. I have a knight costume I wore last Halloween, so maybe I’d wear that. 🙂

Love the cover, Amanda!! Any chance the book will be sold “early” so that it will be there in time the RWA literary signing in July?

For your Venetian party, I would be wearing a colorful creation on my head with lots of feathers and an attached mask of papier mache that covers just the eyes.

The cover is beautiful and your name IS really big 😀

I think I would have to come as a medieval lady. I love that long, loose, floaty feeling!

I think that book will fly off the shelves!

Keira, eHarlequin sells the books online a month early so Amanda’s book should be available at least online. What about at RWA, Amanda?

I have put the title down on the form for the literacy signing at RWA (and need to check with my editor to see if they will have it there) but I hope it will be! 🙂

LOL, Keira! I’m glad to hear about the gown. 🙂 I’d love to have some Italian Renaissance gown, like the red and gold one in the Zeffirelli film of “Romeo and Juliet.”

Full 18th century gown (1760s!) with a long silk domino!!! I know a couple that go to Venice every year for this event, and the costumes they take blow me away.

Congrats on the FABULOUS cover!!!

Great cover, Amanda!
I think masks are fascinating and some of those Venetian ones are absolutely gorgeous.
Janet

I’m so jealous of your friends who get to go to Carnival every year, Kalen! Many of the sites I found showed some gorgeous examples of costumes and masks, and the whole atmosphere is so intriguing. Maybe after I sell several more books I can go (sigh!)

I will be a peacock, with brilliant feathers everywhere. (And yes, I know peacocks are male, but I don’t care!)

I would definitely wear one of the masks I purchased at my favourite mask shop in Venice. Very likely I would commission my modiste to create a gown to complement it!

Amanda, I adore that cover. It’s sexy and it’s lush and it’s gorgeous and it’s so Venetian. I think your choice of the red and gold dress from Romeo and Juliet is inspired. The only problem is I’M GOING TO WEAR IT! Ha!

It’s lovely, Amanda! Is this the one with perfume?

It’s a great cover, Amanda! I look forward to reading the book; it sounds terrific!

I have a kind of fascination with the Commedia dell’Arte, so I’d probably want to go as one of the stock characters. Arlechino, maybe (though these days I might pass better as Il Dottore or Pantaloon. 🙂