Here are some snippets that I found particularly amusing, from various theatre reviews that Hazlitt wrote during the Regency… 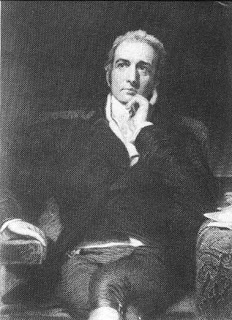 Why they put Mr. Kemble into the part of Sir Giles Overreach, at Covent Garden Theatre, we cannot conceive: we should suppose he would not put himself there. Malvolio, though cross-gartered, did not set himself in the stocks.

No doubt, it is the managers’ doing, who by rope-dancing, fire-works, play-bill puffs, and by every kind of quackery, seem determined to fill their pockets for the present, and disgust the public in the end, if the public were an animal capable of being disgusted by quackery.

(The gentleman pictured above is John Philip Kemble, the powerful actor/manager. His whole family acted, included his sister, Mrs. Siddons, and his brothers, Charles and Stephen Kemble.) 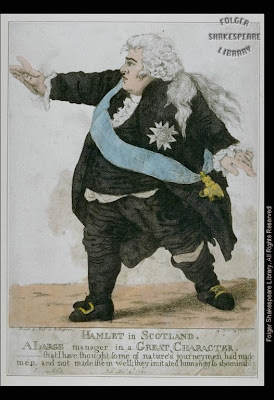 The town has been entertained this week by seeing Mr. Stephen Kemble in the part of Sir John Falstaff, as they were formerly with seeing Mr. Lambert in his own person.

We see no more reason why Mr. Stephen Kemble should play Falstaff, than why Louis XVIII is qualified to fill a throne, because he is fat and belongs to a particular family. Every fat man cannot represent a great man.

(The gentleman pictured here is Stephen Kemble, and he was indeed the least admired of the Kembles!) 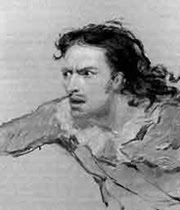 In going to see Mr. Kean in any new character, we do not go in the expectation of seeing either a perfect actor or perfect acting; because this is what we have not yet seen, either in him or in anyone else. But we go to see (what he never disappoints us in) great spirit, ingenuity, and originality given to the text in general, and an energy and depth of passion given to certain scenes and passages, which we should in vain look for from any other actor on the stage…

His Romeo had nothing of the lover in it. We never saw anything less ardent or less voluptuous. In the balcony scene in particular, he was cold, tame and unimpressive… He stood like a statue of lead.

(The third picture, of course, is of Edmund Kean!)

Of the reviews Hazlitt did of Kean, this was the least flattering one that I’ve come across. He did seem to admire him very much, and be rather more impatient with the Kembles!

So — if you were magically transported back to the Regency, and could see anything (or anyone) at the theatre that you wished, what (or who) would it be? Or would you spend more time looking at the theatre or the audience?

Elena Greene grew up reading anything she could lay her hands on, including her mother's Georgette Heyer novels. She also enjoyed writing but decided to pursue a more practical career in software engineering. Fate intervened when she was sent on a three year international assignment to England, where she was inspired to start writing romances set in the Regency. Her books have won the National Readers' Choice Award, the Desert Rose Golden Quill and the Colorado Romance Writers' Award of Excellence. Her Super Regency, LADY DEARING'S MASQUERADE, won RT Book Club's award for Best Regency Romance of 2005 and made the Kindle Top 100 list in 2011. When not writing, Elena enjoys swimming, cooking, meditation, playing the piano, volunteer work and craft projects. She lives in upstate New York with her two daughters and more yarn, wire and beads than she would like to admit.
View all posts by Elena Greene →
This entry was posted in Uncategorized and tagged Theatre. Bookmark the permalink.
0 0 votes
Article Rating
Subscribe
Login

I like to sample Hazlitt’s writing — such a splenetic man — and SUCH a fan of Napoleon’s, btw.

Kean’s Hamlet. It was supposed to be brilliant.

I’d love to see Mrs. Siddons, myself. They all thought she was so fantastic, I want to see what she was doing!

And Kean too, I guess, to see just what his acting style was… (I find these things so hard to tell from written descriptions!)

I’d want to meet actress/playwright/novelist Elizabeth Inchbald. We’ve got so much in common!

I’d love to see if the acting was natural, as it is today, or if it was stylized, exaggerated.

I’d love to see if the acting was natural, as it is today, or if it was stylized, exaggerated.

Over the centuries, there have been so many actors hailed for their revolutionary “natural” style — so what I want to know is, was each a further step toward natural acting? Or was there “backsliding” in between them, so that each “natural” actor was pretty much discovering the same new ground?

I’d love to see all the great actors of the period–Kemble, Kean, and Siddons. But I would find it very interesting to see what the theatrical experience was like, compared to the present day. They couldn’t dim the house lights (which mysteriously makes it much more likely than an audience will settle down and be quiet). The theatres were vast, and plays were popular entertainment aimed at the entire populace. One reads of plays or actors being hissed off the stage, which rarely if ever happens now; the most I ever hear about now is people walking out during the interval.

And yes, I’m curious too as to how the acting style differed from today, and whether Kean was really such a revolutionary…

Also: if you are bringing a pet hedgehog to the theatre, is it better to sit in the orchestra, or in a box?

Todd, you should definitely box the pet hedgehog along with the pet dog and leave them both in the green room.

You concur, dear Bertie, don’t you?

Todd, you should definitely box the pet hedgehog along with the pet dog and leave them both in the green room.

You concur, dear Bertie, don’t you?

Indeed, Madame! Hedgehogs are charming pets (with far less fur than cats) but they can be very prickly audiences. Bad enough ordinary patrons throwing rubbish at the actors — angry hedgehogs have been known to throw themselves, which can lead to a few too many holes in the leading lady.

Bertie the Beau, at your service