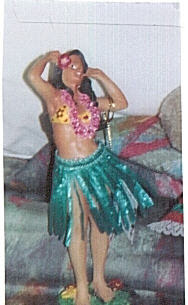 From Dictionary.com
Talisman–a stone, ring, or other object, engraved with figures or characters supposed to possess occult powers and worn as an amulet or charm
Superstition–a belief or notion, not based on reason or knowledge, in or of the ominous significance of a particular thing, circumstance, occurence, proceeding, or the like
Hula–a sinuous Hawaiian native dance with intricate arm movements that tell a story in pantomime, usually danced to rhythmic drumming and accompanied by chanting
This post goes along with Megan’s yesterday (though Friday the 13th passed here with no grave occurences–it was just cold and rainy all day!). I’ve often found artists of all sorts (sometimes including myself!) to be a rather superstitious lot. Shakespearean actors and their “Scottish play,” for example, or an art major I knew in college who would only work at the easel while wearing his “lucky shoes” (an ancient pair of very smelly Converse, layered with varicolored oil paint splotches). Dancers might be the worst of all. When I was into ballet, everyone I knew had their own collection of talismans and lucky charms (necklaces, rocks, and troll dolls mostly, not the LC cereal, though there was this one girl who claimed if you ate the little marshmallows without milk they had no calories…). Everything had to be arranged and aligned just right to bring good fortune to a performance or rehersal. I had a special way of tying my shoe ribbons.
My desk is a little universe of talismans, designed to lure my muse and keep goblins (self-doubt, writer’s block, stubborn characters) away. I have two small, flat stones fished from an icy-cold riverbed in Taos. A little Buddha with a slot for tea light candles (yellow, to inspire creativity). A statue of St. Teresa of Avila (one of the patron saints of writers!) that belonged to my grandmother. Pictures of actors and actresses who resemble my characters, or who I just happen to like. And, most important, Leilani, whose photo you see here.
Leilani is a bobbling hula dancer figure, meant to go on a dashboard, that I bought at an ABC store on Maui. ABC stores are wondrous places, where you can buy flip flops, sunblock, a plastic tiki god, a jumbo box of chocolate-covered macademia nuts, and a bottle of pineapple wine, all in one easy stop. Leilani is my best good luck charm. When I get stuck in my writing, I just reach out and make her bobble, look into her weirdly painted eyes, and ask her for inspiration. She usually says things like “Give up on that Regency duke and write about palm trees and beaches!” But she’s better than nothing.
Do you have any good luck charms? What’s on your desk today?

OK, I debated whether I should post or not. I’m a pack rat and I firmly believe in talismanic collections. My list could be laughter-inducing. Just don’t let me know. I like to keep my illusions. 🙂

Two Hawaiian tikis (Lucky and Kaanaloa), photo of me with the Buddha, photo from our last trip to Hawaii, two pictures of the Dalai Lama, bookmarks and other such gifts from writers I love, wooden phrases such as “Breathe” and “Believe,” two empty tins of special chocolate from my close friends, and two boxes (a painted one and a lacquered one). All the pens that are in the pen cup have some significance or another, as does the notepad. This about covers the major stuff on my desk. I’m sure there are other things that I’m missing.

I write on my lap top wherever I feel like, so I don’t have a special place for talismans (or is that talismen?). But I usually write in our den and in full view of my RITA statue and my NRCA plaque!
And the Regency prints that are on our walls – my Byron picture, and a few others!

Keira, your desk sounds like my kind of place! 🙂 How could I have forgotten my rock?? It has “Create” engraved on it, and holds the vast pile of papers by the desk down.

Alas, no lucky charms here. . . I did try to make a watch a lucky charm once. . . and this necklace I kept wearing long before that. LOL

What’s on my desk. . . depends on what you mean by desk. (aka “what the definition of is is. LOL). I use a folding table for my laptop, and that’s the only thing that can fit on it. The table near me, is where all the books I plan to read in the near future are, plus tissues, plus clock, plus where I keep the drinks, plus my jewelery, plus Phantom ornament from last year. Alas, it’s not as big as it sounds for all that. LOL

The actual desk in the room I use to keep stuff that you don’t normally keep in desks have some bears, some rubber duckies, some Ernies, Deep Space Nine and my Darth Vader trick or treat pail. Which I got two years ago. Why didn’t they have that when I was a kid??? 🙂

Very serious scientists like me are not at all superstitious. We don’t believe in talismans and such. We believe in very little, actually. In fact, I probably wouldn’t believe in anything if it weren’t for my lucky astrology mood watch.